On any given ‘island night’ – the twice-weekly cultural show held at Rarotonga’s Edgewater resort – the resident MC, Danny Mataroa, is sure to be front-stage priming the audience with witty anecdotes about life in the Cook Islands.

Meanwhile, outside, the dance troupe will be preparing themselves for the evening’s highlight, the drumming and dance performance.

Made up, largely, of a single family clan, right down to toddlers in cotton pareu sarongs – barely confident walkers, yet already natural-born performers – the troupe go through their last-minute routines while an ensemble of matriarchal chaperoning mamas, plump and preened, keep a watchful eye over the more flirtatious girls among the group. Make-up is applied and adjustments made to dazzlingly bright pink, yellow and scarlet raffia costumes studded with tropical shells and bird feather plumage, while the fragrant scent of frangipani and tiare flowers fills the humid night air.

As the dishes from the umukai buffet are cleared from the tables the stocky, balding and mustachioed Mataroa entertains the audience with his patented Billy T James sense of Polynesian humour. Asking for a show of hands of all those from New Zealand – the overwhelming majority of visitors to the Cook’s these days – his well-rehearsed one-liner elicits a laugh from the Kiwis in the crowd, “Welcome home!”

It is part of the Cook Island’s oral lore that Rarotonga’s sheltered Muri Lagoon was the departure point, several centuries earlier, for a flotilla of seven large voyaging canoes, or vaka, bound for Aotearoa. This auspicious landmark at Avana Harbour is denoted by a circular cairn of rocks symbolically representing each of the canoes – Te Arawa, Takitimu, Tainui, Mataatua, Tokomaru, Kura-haupo and Aotea – that sailed southwards across the Pacific to settle New Zealand. According to Mataroa’s interpretation of history, the return journey was a lot easier, via an Air New Zealand Boeing 767.

Nowadays, Muri Lagoon is the favoured locale for many of the island’s chic luxury resorts. But interspersed between the likes of ‘Rumours of Romance’, Te Manava and the Pacific Resort are budget backpackers and self-contained bungalows straddling this prime piece of coastal real estate. This mix of hospitality options delivers an eclectic array of foreign visitors, there to sun themselves on the sparkling sugar-white coral sand beachfront or to snorkel amongst the kaleidoscopic variety of tropical marine life in the tepid waters of the lagoon.

Along Muri’s roadside frontage I discover ‘Coconut Tours,’ where you can take a guided self-drive tour of the interior valleys and highland plateaus on either a quad bike or a two-seater buggy, with no special licences necessary to operate them. I wind up doing both because the quad bike option penetrates into the remotest recesses of the forest, which tourists couldn’t get to on their own, while the buggies take you on a circuit of the island. Remember the mozzie repellant, though, because the deeper you traverse into the bush the more prevalent the blood-sucking mites get.

The ‘island buggy’ tour, in a contraption that’s a cross between a go-kart and a beach buggy, is filled with loads of excitement and burn-outs, especially on the unsealed wet patches we can find.

My seven-year-old in the passenger seat sees a new side to her ‘hoon’ dad when we eventually get to take the machines off-road on a rutted plantation reserve and really let loose.

But it’s all a bit of good, safe fun in the jungle. We end our mud-splattered ride with a luncheon of tropical fruits washed down with chilled Raro juice.

Life on the island wasn’t always this way. When the Reverend John Williams of the London Missionary Society and his Tahitian convert Papeiha arrived in 1823, Rarotonga’s population was holed up strategically high in the mountainous regions to counter constant feudal attacks from their marauding neighbours.

The missionaries soon persuaded the Ariki, high chiefs, to resettle around the mission stations they established on land along the coastal plains, breaking long-held alliances between extended families. Tough regulations called ‘blue laws’ were imposed banning traditional customs like tattooing and animistic worship of idols. Pagan festivities were outlawed and curfews introduced, curbing any after-dark extra-marital relations. The church and its attendant mission schools quickly became the hub of village life on the island. There was a total departure from communal living around the traditional marae once the influence of the LMS took hold. 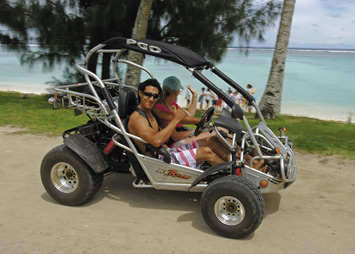 A great deal of scorn is directed towards the missionary era by today’s Cook Islanders for its heavy-handed,paternalistic stance towards the people. But the Protestants also brought some positive changes for many, introducing greater gender equality, a form of democratic governance and improved agricultural methods, increasing the supply of food for the islanders.

Another evangelical legacy is the national Gospel Day ‘Nuku’, a public holiday and festival commemorating the arrival of Christianity to the Cook Islands, which is held on October 26th each year. It’s a full day affair for Rarotonga’s church-going community, with all six Cook Islands Christian Church parishes putting on rousing theatrical performances in a spirit of good-willed competition.

The day we attended, the Nuku was being hosted on the historic and hallowed grounds of the Takamoa Theological College in Avarua, just a coconut’s throw from the very spot Papeiha first read aloud bible scripture to early converts.

The festival begins with the entire congregation parading in for a prime ministerial welcome, then in turn each village performs songs, pantomimes and bible story re-enactments to entertain the crowd. A heavy tropical downpour in the midst of one act does little to dampen the enthusiasm of participants who continue their religious revelry despite getting soaked to the skin.

English church hymns translated into Cook Island Maori reverberate across the grounds as a chorus of white-robed gospel singers give praise to the Lord with stirring harmonies.

A black-cloaked rock-star Satan leads a procession of hip-hopping youngsters in a musical skit that ends with him being cast from the stage during a heavenly tussle, while several of his followers do back-flip somersaults across the lawn wowing the audience.

It’s Gospel ‘island style’, as only Cook Islanders can deliver.