A weekend on an island with a difference provides a peaceful break for Monica Tischler.

On the ferry to Kawau Island, I ask a group of locals what it’s like to live there.

They exchange glances and pause to think, before agreeing: it’s quiet.

The answer isn’t surprising. There are no proper roads there and no shops, not even a supermarket. But the magnitude of the island’s peace and tranquillity doesn’t register until stepping ashore.

The ferry pulls up at South Cove wharf and we climb off, laden with weekend supplies: walking gear, food and a fishing rod each.

A last-minute decision to escape the city had me online looking for holiday inspiration. Kawau Island caught my attention. It’s close to Auckland and easy to get to, yet its environment couldn’t be more of a contrast to the hustle and bustle of urban life.

The ferry’s algae-covered rope slips off the wooden pillar and the hum of its motor grows faint as it edges away. Silence envelopes us. There are no vehicles to be heard, no chatter of a buzzing society; nothing but lapping water and the throaty warble of tui.

Golf buggies are a popular mode of transport here and our rented bach’s owner has left one near the wharf for us, to make the journey up the hill to the house quick and easy. A wallaby bounces across our path as we drive through the gates; several weka scatter off into the bush. It’s hard to believe we’re still in New Zealand.

Glimpses of harbour views are limited as darkness falls, and a thick curtain of mist the following morning teases us some more. The haze doesn’t lift until we paddle our kayaks, provided with the bach, out into a glassy bay where we’re treated to spectacular sights.

We’ve heard there are good fishing spots around nearby Beehive Island, a small, grassy mound with a ring of pale yellow sand at its base. We paddle around before agreeing on a spot that feels lucky. Conditions couldn’t be more perfect for fishing: the breeze is gentle, barely there, and the smooth, dark green water means it’s deep. A penguin pops its head up.

It doesn’t take long before we feel little tugs at the end of our rods, and then bigger, stronger pulls. 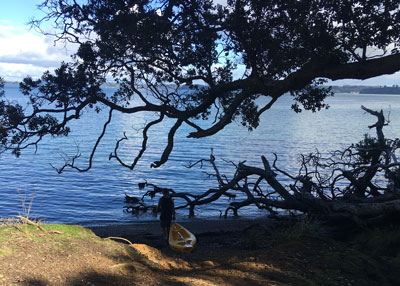 After proudly indulging in fresh fish for lunch, we complete a few nearby walks, including one affectionately named ‘Jock’s Track’, a steep, muddy pathway with a rope to guide us down toward a magnificent, rocky bay. A memorial at the track entrance says it’s a tribute to the bach owner’s late husband who treasured this area.

We jump back in our kayaks and push through the water, past ruins of the island’s old copper mine. Dragging our boats safely onto the rocks, we marvel at the crumbling building that once housed the steam engine and pump to keep the mine free of water. Copper was extracted here from 1844 until the early 1850s and there were at least 300 people living on the island back then. I’m told there are now a mere 85 permanent residents.

Over to the next bay, Dispute Cove, we tie our kayaks up and walk over the hill to Mansion House Bay, sharing a track with fantails and monarch butterflies. The grounds are in full autumnal bloom; auburn and amber carpets surround bare trees; our footsteps crunch. The house of former New Zealand Governor General, Sir George Grey, glows in the sunlight. I let my mind wander to what life must have been like back then. Originally the residence for the island’s mine superintendent, the Victorian home was purchased in 1862 by Grey, who spent a fortune developing Kawau, planting orchards, olive groves and other exotic and native trees. Today, peacocks and wallabies can still be spotted here.

On the return ferry home, a rainbow casts an arch over the shrinking island as we chug across the Hauraki Gulf back toward the mainland. With an environment rich in history and teeming with nature and wildlife, Kawau Island really is a pot of gold.

Regular return ferry services depart from Sandspit, about an hour north of Auckland, with a secure car park at the terminal. Once on the island, water taxis are available.

Both fully-catered and self-contained accommodation is available. Meals need to be planned before your trip. Mansion House Café and Kawau Boating Club serve food
and coffee during peak season but are closed in winter.

The island is abundant with walking tracks, including near Mansion House grounds. The house’s opening hours are seasonal though, and it’s closed from June 1 to July 31.

There are various cruise options available which provide insight into local history, the chance to watch gannet dive and the opportunity to enjoy an onboard barbecue lunch.
While casting a line off the rocks or wharf is fun, so is joining a fishing tour. There are several excursions available.