Fiona Terry and her family walk the longest of New Zealand's Great Walks.

It was a spectacular way to begin a five-day tramp – cruising above the shimmering Golden Bay coastline in a 1955 De Havilland Beaver. A mass of brooding grey clouds threatened the sky above Kahurangi National Park.

We’d longed to walk the Heaphy Track but the logistics had proved too tricky. While the walk itself may be a challenging 78.4km, the road trip back to retrieve a vehicle is a whopping 450km.

We were excited, therefore, to find a solution involving a fixed wing aircraft that could fly us direct from Nelson Airport to almost the start of the track. It would enable us to begin tramping just over an hour after leaving the city’s tarmac and also save us the drive over Tākaka Hill. At walk’s end, we’d fly straight back to Nelson from Karamea after completing the longest of the country’s Great Walks.

As the immaculately renovated Beaver banked away from the coast to head up the Aorere Valley, the rain was unavoidable and the wind was picking up. Air Charter Karamea pilot Sam warned us he may need to land in Collingwood instead and drive the extra distance to the start. “It’s an adventure,” he reminded us through our headphones, “But I’ll see what I can do. Safety always takes priority.” I was reassured by these words as we were buffeted by the wind, but carefully he guided the plane to our preferred landing spot – a private airstrip in Rockville, just 20km from the track.

We piled into Sam’s waiting vehicle, briefly stopping at the iconic Langford Store in Bainham to stock up on extra supplies. As we set off on foot past Brown Hut at the start of the track, the rain fuelled the rivers but we were grateful for the cooling drops on our 17.5km, five-hour gradual climb to Perry Saddle, 860m above sea level. The well-defined, leaf-strewn path snaked through the forest, in places the canopy of beech, tree ferns and kānuka provided shelter, rimu tendrils suspending rain droplets like shimmering crystals.

At times sunlight would glint through the clouds and dodge the lush bush to illuminate patches of the path ahead. Pīwakawaka hopped through flowering mānuka to follow our progress.

We tip-toed over streams, through swirling mist, and were accompanied by the call of tūī and bellbirds, as well as the gentle hum of bees drawn to the sooty, sweet-smelling bark of giant beech trees.

We were weary by the time we reached Perry Saddle Hut. Re-built in 2012, it was a hive of activity, with trampers cooking meals and a large group engrossed in a lively discussion. We claimed four bunks before settling to the luxury of dinner pre-prepared by Absolute Wilderness – the hands-down winner in our pre-trip testing of freeze-dried meals. Sourcing tasty, nutritious and transportable food for five days had been a significant issue, but we were not disappointed.

Next morning we woke to find the others in our room had already hit the track while we’d snoozed until 7.30am. We enjoyed a leisurely start, admiring the now clear view of Dragons Teeth and Mt Olympus peaks as we ate breakfast.

After a quick sweep around with the broom, we set off, relieved to see the sun. Within minutes, 15-year-old Felix spotted a powelliphanta snail, its giant chestnut shell shining from the dirt path. We moved the carnivore aside to avoid oncoming boots.

The track, mostly flat, was lined by tall flax, large white daisies, mānuka in flower, and lancewood in bud. But as we emerged onto Gouland Downs, the scenery changed dramatically. This vast, golden tussock-covered expanse is now a playground and pantry of the rare, flightless takahē, released in March 2018 by DOC. The path wound over the vast plain, a keen wind tugging at our caps as dragonflies darted and tūī called. Mānuka bushes sported strange white ‘flowers’, which turned out to be fist-sized spiders’ nests.

Relief from the wind and the heat came as the path dropped into lush Cave Brook where we stopped to cool our feet in the chilly waters, Tim and Charlie, 12, hopping in for a bracing swim.

Just beyond Gouland Downs Hut, the Enchanted Forest lived up to its name. The track crossed several limestone arches – the remains of old caves – with steep mossy slopes on either side bearing ferns, and giant beech trees dripping with lichen. A short side walk took us to a small waterfall flowing from a cave passage.

We’d spotted many takahē droppings on the granity path during the day, but it wasn’t until we arrived at cosy Saxon Hut, after 12.4km, that we caught sight of the rare birds themselves. The entertaining creatures with their iridescent feathers continued to snip the seed tops off grass by the hut for the entire afternoon until eventually an air of nonchalance prevailed among those inside, distracted instead by an entertaining card game. With no cellphone reception or electricity, it was refreshing to partake in good, old-fashioned pastimes.

By day three we were well into the swing of packing up quickly. We arrived at James Mackay Hut, at 700m, after 11.8km, to be greeted by fellow trampers, many we’d already got to know.

We swapped stories about the day’s walk – of the bold robins that pecked at our shoes, the relief at passing the track’s half-way mark, and the excitement of the first view of the Heaphy River mouth and crashing waves of the West Coast. 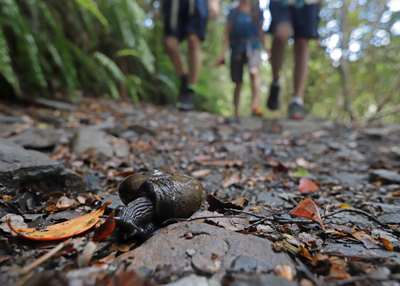 The modern hut was pristine, and cheerful DOC warden Rachel was cleaning the windows when we arrived. Her day took an unexpected turn later when she needed to coordinate a helicopter evacuation of an injured tramper – a reminder that this trail is not without its challenges.

Fantails accompanied us as we set off in the morning. Descending into the Heaphy River valley was like entering the world of the movie Downsizing – the height of the beech, rātā and rimu seemed to magnify with every kilometre covered. Red berries of the nīkau were popular with the abundant birdlife and we had magnificent views of the mountains and river. Occasional coal seams emerging from the hillsides were further reminders we’d reached the West Coast.

We paused at Lewis Hut, ducking inside for lunch after thwarting a cheeky weka making off with one tramper’s belongings. An impressive 149m-long suspension bridge crosses the tannin-stained Heaphy River here. Within a few metres we reached other spectacles – giant northern rātā supporting entire ecosystems and creating arches big enough to drive a car through.

By the time we’d arrived at Heaphy Hut, with its waterfront campsite, it was raining so hard the fat drops made bubbles on the inlet’s surface. Inside, the fire was going. Faces new and familiar joined the chatter and the rain stopped in time to enjoy a spectacular sunset from the sandy, driftwood-edged beach. That night, the only thing breaking the peace was the distant roar of the ocean and the piercing but oh-so-welcome call of what sounded distinctly like a kiwi.

My favourite day on the track was the last – the incredible 16.2km coastal section. The call of tūī accompanied the rhythm of relentless rolling waves crashing on golden sand beaches and rocky boulders. Steep nīkau-covered hillsides echoed Dr Seuss, and every now and then the twisted trunks of magnificent rātā nestled in shady groves where kererū feasted on karaka berries. There was plenty of evidence of washouts from storms and sometimes the path would pop down to the sand, with signs highlighting the risks during extreme sea and weather conditions.

After a last climb to reach the saddle at the final bluff, we triumphantly crossed Kōhaihai River Bridge to reach the final marker. Wearily batting away the infamous sandflies, we pulled ourselves into the minivan for the short drive to Karamea Aerodrome. Then, with backpacks re-loaded onto the Beaver, we were treated to a spectacular aerial view across the Kahurangi mountains. Sam’s high-altitude tour included a commentary of tempting-looking lakes and peaks we’d never otherwise have seen, and within an hour of finishing the track, we were back at Nelson Airport, legs rested, and just in time for tea.

The Heaphy Track is the most varied of New Zealand’s Great Walks in terms of terrain. We covered it in five days by foot but plenty achieve it in four, or even less.

Mountain biking is permitted from May 1 to November 30.

Air Charter Karamea offers direct flights from Nelson to the start of the track, and connecting flights between Karamea, Takaka and Rockville.

Find out more about the Heaphy Track through Department of Conservation or pick up a free Walking Must-Do’s guide to walking tracks in New Zealand from an AA Centre.