Storytelling is king at the Manea Tupuwae ā Nuku, Footprints of Kupe cultural centre where actor-guides deliver a '75-minute multisensory journey’ near the village of Ōpononi.

Legendary Polynesian explorer Kupe is the undoubted hero of the central story, relayed with the help of traditional waiata and contemporary technology, theatre and art.

This isn’t exactly a museum or a gallery and it’s not just a tour or a film, though these elements are all present, alongside a startling first-hand encounter with pseudo octopus tentacles.

The $9.6m complex sits on a rise overlooking the Hokianga Harbour entrance that Kupe is said to have crossed roughly 1,000 years ago, after discovering Aotearoa.

On the day I visit, teenage guide Rāmai Rapiana Ngakuru (Ngā Puhi/Ngāti Porou) begins with the Māori creation tale, as guests walk amongst impressive carved tōtara figures depicting mythical beings. We encounter atua (gods) who govern weather, war, food and forests; learn the origins of hongi and how this form of greeting is unique to New Zealand.

Rāmai’s father was one of four local carvers who spent seven months working on the deities that, we’re told, now form the largest collection of modern Māori art in New Zealand.

The artist’s daughter is barefoot and clad in traditional costume, initially speaking te reo for school students visiting from Wellington. The centre’s creative director Joby Hopa acts as her interpreter for the rest of the 50-strong group that includes an Auckland film crew fresh from their last day on set, a young family and a scattering of tourists. One woman grew up nearby and is revisiting old haunts, traversing Hokianga’s near-empty roads, past laundry strung outside farmhouses and red and white churches on hills. 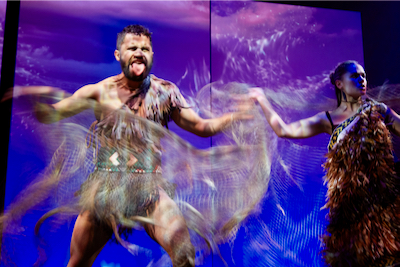 Interest has been building since the centre opened in December 2020. Some weeks, as many as 1,000 school students travel to this quiet western corner of Northland, for education and entertainment. Recently, Whangārei Intermediate brought its entire student population. Corporate groups and conferences, sports teams and independent travellers are also buying tickets.

The stories unfold with plenty of drama, bursts of song and humour. Kupe’s travelling companion is described as his BFF (best friend forever); we’re told they paddled the oceans 'with no GPS!’

Rāmai is part of the story, too. She claims Kupe as an ancestor and grew up nearby, attending the local school where she became a fluent te reo speaker. Manea was created with rangitahi like her in mind. Kaumatua dreamed up the cultural centre idea 20 years ago, hoping to bring the old stories to life while providing employment and leadership opportunities for coming generations.

According to Joby, community jobs for school leavers are limited in this part of the Hokianga, with options largely confined to café or farm work, or housekeeping at the local hotel. Now, the homegrown tourism business provides a viable alternative for those who want to stay in the area, and the governing trust funnels profits back to the district’s hapu and marae.

“Everyone we employ is local,” Joby says. “This place offers pathways to employment in two languages. And, for everybody, this is all about cultural competency. We show Māori kids and New Zealanders in general our real origins, the attributes and skills of people who came here, that Māori have ancestors who were supermen and superwomen. This is the story you want young people to hear.”

Twenty-year-old Mikaira Te Whata Heremia left the district to work as a cabinetmaker before Manea lured him home. He enjoyed kapa haka and performance work at school but could not imagine utilising these skills – or his reo – in a career. He is relishing the mix of roles the new job brings.

Leading visitors through nearby Waipōua Forest at twilight is one of Mikaira’s favourite tour offerings. “Night time’s kind of different. You get a pretty sunset and all the carvings are lit up. Everything feels more spiritual.”

Inside the theatre, he and his younger colleague Rāmai perform parts of Kupe’s octopus-hunting story on stage, interacting with the 20-minute film that plays on a large screen behind them. The impressive audiovisual experience is supplemented by some additional sensory blasts including a spray of sea mist and the whiff of a sea creature.

Not all stories are easy to hear, though. In a neighbouring room, visitors can move between listening stations that offer firsthand narratives and snippets of written history covering everything from education and law, to the deadly influenza epidemic and the tohunga suppression act.

The team behind Manea is also looking forward, planning to offer more cultural activities and stories, new leadership programmes and construction of a waka that will eventually sail back to the Kupe’s homeland. “Because we don’t want to just talk about our history, we want to live it,” Joby says.

Reported by Sue Hoffart for our AA Directions Spring 2021 issue