Monica Tischler goes to what feels like the edge of the earth to experience the magic of Milford Sound.

It’s not surprising Captain Cook sailed right past Milford Sound on his voyages – not once, but twice.

The silhouette of Dale Point overlaps the entrance to the fiord, obscuring the view from the Tasman Sea. There is often low-slung mist loitering around the jagged mountains that frame the opening, too.

So Cook kept his ship well clear, in fear of damaging it. Milford Sound wasn’t discovered by European explorers until 1812 when Welsh Captain John Grono, in New Zealand to research fur seals, happened upon it. He named it Milford Haven.

Its seclusion makes it even more special. Adding to the wonder is the clear blue sky revealed once the thick curtain of cloud parted after 15 days of rainfall. Visiting the Sound without experiencing rain is a rarity. It is, after all, the wettest coastal area in the world and has more annual rainfall than the Amazon Rainforest.

Contrary to common weather patterns, the horizons stayed clear to expose every detail of spectacular crevice and ravine carved by ice and glaciation over millions of years. So, too, was every detail visible in the many waterfalls: some, thin scars slicing the rugged mountain range, trickling down the steep rocky slopes like braided rivers – others, like Stirling Falls, fast, full-bodied and gushing.

The Southern Discoveries cruise pulled slowly through the silky waters, passing a group of New Zealand fur seals enjoying the sun from a rock jutting out of the lichen-covered shoreline below Stirling Falls. The Māori name for the waterfall is Waimanu, meaning ‘mist dancing on the water’s surface’ which paints an accurate picture. The boat’s bow edged into the spray furling through the cool air and drenched passengers aboard the open-air top deck in what’s called a ‘glacial facial’.

Of course, Māori had long been enjoying Milford Sound before its discovery by Europeans and named it Piopiotahi, after the now extinct thrush-like piopio bird. Adding to the air show today are flashes of kea; the alpine parrot reveals a fiery orange underbelly as it swoops overhead.

I experienced Milford Sound with Southern Discoveries through multiple modes of transport. We approached by land, in a coach for 290km over five hours from Queenstown, through Te Anau into Fiordland National Park, which is 1.2 million hectares of UNESCO world heritage area. One out of four landscape and cultural requirements must be met to be given such status but the national park, with rivers, waterfalls, glacial valleys, tectonic plates and spectacular bird and plant life, is so special it meets all four.

Travelling by coach meant stops at iconic landmarks – Mirror Lakes and The Chasm. The coach windows and glass-top roof framed ever-changing scenes: high- and low-country farms; mānuka- and rimu-lined roadsides ­– and the odd cabbage tree, often a sign of where a Māori pā once stood. Purple and pink lupins were scattered like confetti across green pastures, along with the noxious yet beautifully vibrant yellow gorse originally planted as wind-break for farms. Spindly toi toi swayed; lakes, plentiful with rainbow and brown trout, shimmered. 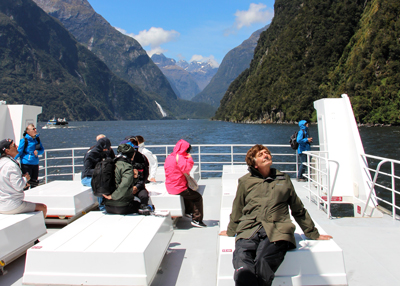 The scenes became more dramatic – almost menacing – as we edged closer to the national park. Silvery moss known as ‘old man’s beard’ swathed skeletal trees. We entered the darkness of Homer Tunnel, came into the aptly named ‘Valley of a Thousand Waterfalls’ and wound down the steepest alpine road in New Zealand to reach what writer Rudyard Kipling called the eighth wonder of the world.

On board the cruise gave another perspective, and then again, when we slipped into kayaks and paddled the curve of several bays. All the while the foreboding mountains resembling wise, old caregivers watched over us, the dustings of snow atop craggy peaks like grey hair. We steered our kayaks to an underwater observatory within Milford Sound and soaked up the fascinating phenomenon known as ‘deep water emergent.’ The water here is both cold and calm, due to the surrounding glacial mountains, and stained dark from the tannins in mountain runoff. This simulates a deep-water environment where marine life more commonly found 80m beneath the water’s surface, adapt to life at around ten metres.

The sun dipped low in the sky and the mountains lost their intricate detail, becoming block shapes like cut-outs from black cardboard. The last sights of the day were revealed from the sky, aboard a fixed-wing Milford Air plane. The 80km journey back to Queenstown took less than an hour as we flew over the treacherous, tricky terrain and looked down on it instead. The beautiful Milford Sound protected by those remarkable mountains made an even greater impression from this vantage point. I imagined I was a piopio bird, able to revisit this magnificent part of the country whenever my spirit desired.

Boarding the Spirit of Queenstown catamaran for a cruise across Lake Wakatipu was just the beginning of this exceptional day. As we ploughed across the lake, the captain provided a commentary, identifying the various landmarks, reassuring us that the clouds building at the southern end of the zig-zag lake was not necessarily an ominous sign.

After 45 minutes we arrived at Mt Nicholas Station and wheeled our rented bikes onto the solid old wharf. We were here to take the 14 km Station 2 Station cycle trail, organised for us by Southern Discoveries.

Leaving Mt Nicholas Station, we followed the lake edge out onto the narrow, unsealed, quiet country road. We rode under a big, wide sky with clouds scudding and then building; the wind was at our tails so I didn’t care about a little drizzle.

Surrounded by hills, with dips into a river valley, we passed startled cattle, horses and sheep; we stopped regularly to photograph the incredible views across and up the lake. Great slopes reared up around us, yellow and nutty brown in the afternoon sun. Occasional slashes of silver gave the landscape depth. Hawks floated overhead; paradise ducks squawked and cried.

After a couple of hours we arrived at Walter Peak Station. The old homesteads, with their emerald green lawns, surrounded by rhododendron, azalea and iris gardens, were charming and gracious. We sat on the lake-side patio of the restaurant with a celebratory wine to wait for our ride back to Queenstown aboard the TSS Earnslaw.

Wind whipped over the lake leaving glassy patches. Out deeper, white caps galloped across the surface, signalling a change in weather. 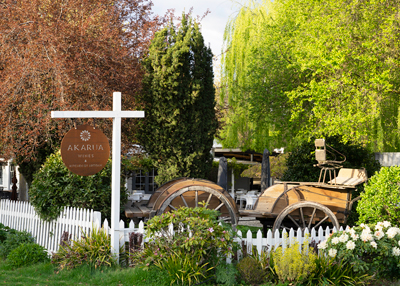 And so it was that the following day’s itinerary changed. Too much rain to follow through with plan A, we took a rental car to achieve a very special kind of plan B: lunch at a winery.

Akarua is a special, welcoming restaurant and cellar door. It’s in the countryside, on Lake Hayes Road near Arrowtown and it serves top-notch food and wine. The renovated historic house was busy with parties of happy guests enjoying the intimacy and cosiness of inside; we opted for outside. They’re obviously well used to this sort of weather; the alfresco option, set in a pretty, colourful garden, was well sheltered.

We lingered over lunch, enjoying the newness of flavours, trialling delicious wine and soaking in an ambience special to this part of the country.

Reported by Monica Tischler for our AA Directions Summer 2020 issue

The writer was hosted by Southern Discoveries.