On a moonlit quay we were split into groups of six to eight and led up a narrow path into a regenerated forest. Around 5.45am we reached a dark, wooded area. I could make out benches and chairs that had been laid out on one side of the track where we were invited to sit and wait. As people took their positions I was reminded of being in church: absolute silence and a reverential expectancy among a congregation dressed for the cold, carrying rucksacks and water bottles and lined up along makeshift pews under the night sky.

I was part of the inaugural Lost World Dawn Chorus tour to Tiritiri Matangi Island in the Hauraki Gulf. This was a chance to hear the result of the repopulation by birds of a reforested island that only 30 years ago resembled a dry, oversized paddock. A young forest now flourishes on the island and it rings, loudly, bursting with songs – hinting at how New Zealand once sounded.

A familiar call rang out: the crazy, melodious sing-song gurgling and squawking of a tui, followed by others from different directions somewhere in the darkness. New voices began to chime in the background, the North Island robin made itself known. Streaks of grey appeared in the sky and I was able to make out the other members of the expedition, intent, concentrating on the extravaganza taking place around us.

The volume increased dramatically with the arrival of two new players into the avian orchestra: the clear chiming call of bellbirds rising like a brass section, tempered by the beautiful, flute-like notes of kokako directly overhead, providing soft woodwind to a symphony the like of which I had never heard before.

Chirping sounds emerged: the whitehead and then the stitchbird, the saddleback and finally the kakariki. I was entranced, forgetting how cold I had become, sitting still waiting for daylight to break. And the lighter it became, the more intense the layers of sound: waves of warbling and chiming, squawks, chirrups and tweets washing around us unseen in the canopy. People were holding out smartphones to record what was by now an unbroken wall of noise.

After about an hour the dawn chorus began to wind down as the sky turned light blue, the volume lowering as players flew off to do what birds do on Tiri which, as far as I could ascertain, was live an active, productive, exuberant life unconcerned by humans or pests.

I broke away from the expedition and headed down a track that led me over the spine of the island to its east coast. I had the island pathways to myself, just me and the birds. And they were everywhere at this early hour: tuis diving and swooping, chasing each other through the branches of the juvenile forest; saddlebacks, their russet colours glowing in the low sunshine as they hopped from branch to branch.

At the visitor centre I sat down to talk to Mary-Ann Rowland, Tiritiri Matangi’s guiding manager responsible for organising the Lost World Tour, and asked her why she had put on this special expedition.

“I thought there are not enough people who get a chance to see what this country could be like and what it used to be like.” 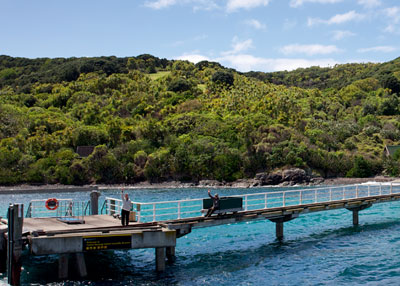 I told her it made me sad that this was the stage the country had found itself at: where we had to go to an offshore island to see what life should be like on the mainland.

“Absolutely, and this is partly why I wanted to do it, so that people can recognise that. One school that came out, the teachers had taken all the children into the bush beside their school and they’d sat there for 10 minutes in silence listening and they hadn’t heard a thing. And then she brought them all out here and she made them do the same thing and asked the children to describe it. They called it happy bush and sad bush. That’s what it’s all about. People don’t know what they’ve lost.”

I asked if she had been nervous that the birds wouldn’t perform that morning.

“Of course I was!” she laughed.

On my early-morning exploration in some semi-open countryside I had found a takahe plodding through the long grass by the edge of the forest. I was face-to-face, almost, with a bird thought to have been extinct until 1948 when a colony was discovered in the Murchison Mountains in Fiordland.

It was a thrilling moment that summed up the magic of what has been achieved on what is now a beautiful island: no more a dry, weed-filled, pest-ridden paddock, but a living, breathing, thriving ark cradling New Zealand’s lost world.

Reported by Mark Meredith for our AA Directions Spring 2020 issue