Muzzle Station: The back of beyond

Here’s how you get to Muzzle Station: take an inland road from Kaikōura and, after 20km, go through a locked gate and drive 45km on an extremely rough farm track with many river crossings. When you get to the Clarence, ford it – if the river level allows – or wait for someone to come with a tractor and trailer to ferry you across.

This is possibly the most isolated farm in New Zealand and, incredibly, I am visiting it. I am here as a tourist with Driftwood Eco-tours, travelling in two 4WD vehicles. Our one has a snorkel, which is pretty cool.

We bounce along the primitive road, sometimes driving up river beds with rocks under the vehicle making a rickety, wooden sound. All around us mountains reach up, out and away, seemingly impassable, except we are passing through them. Around a radical corner, the driver says: “See that line way up there? That’s where we’re going.” And up we go, climbing and curving around, with extreme drop-offs and threatening-looking slips above us alarming the passengers – it all seems so dangerous!

But the driver, Lance, is completely under control. Calm, confident and obviously competent.
Lance pretty much grew up here, walking over the hill from the Kaikōura side as a boy to join his beekeeper father for weekends of wild adventures. Later, he worked on the farm on and off and on again, these days being the one responsible for everything except stock on Muzzle Station. He fixes the tractors, bulldozes the track, oversees fencing and changes patches of land scrappy with briar rose, matagari and hawthorn into viable grazing. He also does some guiding, of hunters and of tourists like us who want to see the station and spend some time here. So, Lance knows this road well. We come to a corner he says he recently put metal on because it was really slippery and just the thought of experiencing slippery conditions on this crazy road makes me shudder. That corner up ahead? He had the tractor balanced over the edge of that one, once, and had to call for help. 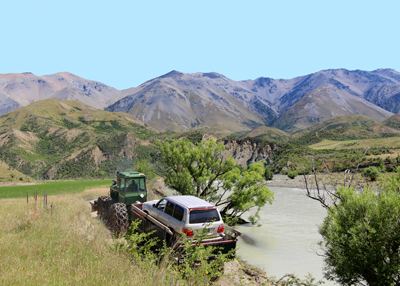 At Dead Horse Pass (where yes, horses died, tumbling off the road into a crevice back when this was a bridle path), we stop for lunch of delicious little pies, cheese scones and cups of tea. Back on the trail, the trucks veer off the ‘road’ to drive up into a vague parting of vegetation, just the hint of a track, to a hidden hut. This place is full of secrets and history. It’s in the names of places passed: Tent pole hut, Smoker’s Hole, Blind Bluff, Quail Flat.

Quail Flat, once a farming centre, is where little cottages, a picturesque old barn and a rickety dairy stand quietly waiting for visitors interested in history. It’s part of Clarence Reserve, the 12,000 hectares of Department of Conservation land leased by Muzzle Station. We stop to look around, take some photos.

Then we’re at the edge of the beautiful Clarence River and the water level is, indeed, too high to ford. Lance loads the 4WDs one at a time onto a massive trailer fixed to a tractor the size of a small house and without a second’s hesitation plunges into and across the river.

Now, we’re on Muzzle Station – a 40km-long, 8000-hectare slice of heaven between the Kaikōura seaward and inland ranges. The owners run 6000 merino sheep and 2000 cattle. They have two planes and a helicopter, which they use for mustering and for getting around. If they didn’t have flight, they’d be stuck here and, in winter, they often are.

Perhaps because they are so isolated, Muzzle’s managers Fiona and Guy welcome visitors such as ourselves. We’re shown to the modern bunk house, home for two days; once we’ve settled in, we walk down to the homestead for dinner.

Fiona, who goes by the name O, is the daughter of the owners; she and her husband Guy have two young, home-schooled children whose lives are busy with horses, puppies, baby goats and chickens.
O makes a meal from food grown on the land and serves it at the big dining table – five tourists, two guides (Lance and Will) and the family. Another person at the table is Fern, a 20-something from Southland who is the Muzzle’s shepherd.

The lasagne is good; so is the salad and bread and homemade plum sauce making a steady trail up and down the table, along with the conversation about the history of the station and O’s childhood here. They’re a relaxed, welcoming family and it’s very special to share their table. I appreciate that it’s not at all precious or pretentious; we’re having pasta and self-saucing chocolate pudding like my mother used to make because that’s what they eat, not because they had guests. It’s real. 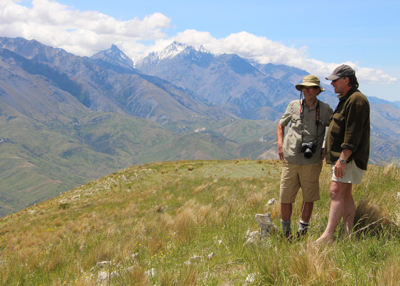 The next morning, outside the bunk house, we gather our sunhats, water bottles and walking shoes for a day on the farm. We’re in the midst of massive mountains, layering away into the early light with deep shadows accentuating their shapes. The sky is utterly blue and the birds are going mad. Some sort of yellow-flowering weed and swathes of pretty Viper’s Bluegoss clothe the soft flanks of land.

All day, Lance tells stories about hunting trips, wild pigs, accidents: an awful one about a bee truck tumbling off the road, stopping just short of a bluff but throwing someone off the back; the terrible wait for help to arrive. Another story involves the farm helicopter crashing and the miracle that no one was hurt, not even a dog. That one was due to miscommunication (it’s a long story) so the upshot was a comms tower being installed high up on a hill above the homestead so that everyone could be in radio contact. We hear that tale as we picnic up that hill, within site of the aerial, marvelling at the surrounding great faces of rock, craggy valleys and, way below, the Clarence curving around the farm, the buildings around the homestead shining in the sun.

Our two-truck convoy zigzags across the station, stopping for views, stopping to open gates, pausing to witness the workings of the farm. We’re by the river when Fern happens by; we watch in awe as she crosses on horseback and controls her pack of working dogs with whistles and calls.

After two nights at the Muzzle’s farm quarters we move camp, driving north east up the valley to remote Ravine Hut.  The trucks cross rock-strewn streams and creeks, inching forward, pulling themselves up. At one point Lance and Will have to move rocks in the middle of a rushing stream in a bit of spontaneous road building.

Ravine Hut – basic and reeking of history – sits in a paddock near the river. The heavy rain stopped a few days ago and the colour is clearing; today it’s a milky green-blue.
The blonde grass stretches away from the hut toward cattle yards. This is where stock is mustered to, for projects involving lots of hands, people pulling their weight, sleeping soundly in lumpy bunks after a laugh around the fire.

It’s such big-sky country. Daytime, nighttime, I can’t get enough of the open space, of being in the midst of some sort of majesty. In the middle of the night, a walk to the long drop loo is rewarded with a river valley view shining in uninterrupted moonlight.

When we leave the Muzzle the next day, it’s through a neighbouring station through to Kēkerengū, north of Kaikōura. Then we’re back on sealed road, back in civilisation. Out the front. The sea shines, the mountains close in behind us, becoming mysterious again. I feel I have been somewhere special, somewhere extreme. Somewhere else.

The writer was a guest of Driftwood Eco-Tours, which conduct small group expeditions into outback New Zealand.