Nature at its best

Jacqui Gibson enjoys the flavours of Māori kai where it all began.

We stand together, silent on the banks of the Whanganui River; ten Kiwis from different parts of the country.

We’re usually a talkative crowd if the last hour is anything to go by. It was all chatter and giggles as we shimmied into our lifejackets; the jetboat taking us upriver from Pipiriki to Puraroto Camp in the central

North Island. But New Zealand’s third-largest river has hushed us, like a teacher standing at the head of the class.

We’re here with a common purpose: to enjoy the food of award-winning Māori-Samoan chef, Monique Fiso. We have joined her Hiakai experience – a pop-up hāngi – where traditional Māori food is cooked underground in the bush on the edge of this languidly flowing river.

Monique, 30, has recently returned home to Wellington after spending nearly a decade in New York, where she honed her culinary skills in some of the world’s best restaurants. Now, she’s campaigning for more attention to the indigenous cuisine of Aotearoa and, more radically, taking punters out of the fine-dining restaurant environment to experience Māori cookery where it started – the great outdoors. 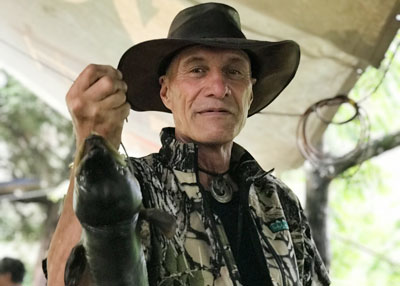 We’ll be together for two days, beginning with a jetboat ride to camp and followed by a day’s eating with Monique. Finally, we’ll kayak down-river to our parked cars.

“Let’s get you settled in and enjoy a bush cocktail under shelter,” he smiles.

Steady rain falls in the humid air as we follow Hayden up the track to camp. Puraroto Camp owner, Jay, zooms beside us on a quad bike and trailer loaded with our backpacks. Dressed in bushman’s camouflage and a leather hat, he revs the bike to overcome a tricky section on the track, before disappearing into the bush. I take off my sneakers for a better toe-hold and use my hands to grip the mānuka fence posts that line the track. Up we go. Squelch.

Clouds of grey mist curl and settle among the pines bordering the river’s steep banks. It’s an easy mental leap to imagine life here in the 1800s when more than 100 Māori families lined the river, plying their trade. The valley’s quietude is disturbed by the bark of the departing jetboat. We arrive at camp.

Monique greets us with hugs and introductions to her two helpers, cookery students, Trish and Atiria. A well-fed fire roars. In a nearby paddock, there’s a half circle of pup tents, where we’ll sleep. Our communal shelter is an open-air tarpaulin, covering an ample seating area.

We’re summoned to Jay’s home for tonight’s six-course dinner. A few metres from camp, Jay’s place is a modest whare with sweeping views over the river. He speaks proudly of raising his son here, focusing on nature and going without television until 2015, and internet until last year. 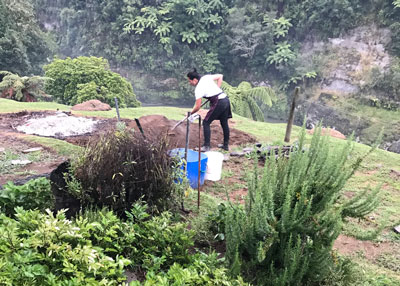 We devour homemade bread served with fat balls of kawakawa butter, washed down with a Tiki sauvignon blanc.

We nibble our way through nori and tapioca crackers topped with horseradish gel, pickled shallots, smoked kahawai and oxalis. Pizzas made from horopito flat bread, steamed mussels, kina and kawakawa are up next.

Then, we devour Monique’s delicious earth-baked hāngi food – kūmara, roast chicken, corn and greens served with a Hihi Chardonnay – only after a mini serving of kamo kamo pasta stuffed with homemade ricotta.

By the time pudding arrives (in my case, a chocolate lamington, paired with a Boundary Road chocolate porter), night has fallen and we’re all calling for our beds. But instead of turning in, we roll back down the hill to a blazing campfire, where we sit and talk to let our food settle.

The next day, Hayden promises to lead us safely back to Pipiriki over a series of low-grade rapids in canoes. The first rapid is ominously named ‘50-50’, referring to a paddler’s chances of making it through without capsizing.

“Not to worry,” Hayden reassures us, “you’ll love it either way.”

“To our people, this river is a source of revitalisation and inspiration. It’s a place that lifts our spirit and our wellbeing.”

After a weekend here, I know exactly what he means.

Reported by Jacqui Gibson for our AA Directions Summer 2018 issue

Monique’s Hiakai (meaning hungry in Māori) events are held in rural locations throughout New Zealand including Marlborough and Kumeu. The Whanganui River experience runs throughout November and December, 2018.

The Whanganui Journey is an official Department of Conservation Great Walk but it’s more of a paddle than a walk. See AA Traveller to read more about it.

While you’re online, book a rental car and accommodation.