Leaving our youngest family member behind when we’ve ventured off on stunning multi-day tramps has always felt a little unfair. Despite having shorter legs than us, we knew the energetic five-year-old would have loved some great walks, but would never have been welcome.

So we were excited to discover a 27-km trail in the Marlborough Sounds on which she could join us for a two-day trek. What’s more, on hearing about our youngster, managers at the midway On The Track Lodge, Adrian and Kayla, were happy to accommodate the whole family. Our border collie Willow was finally in for a pooch-perfect treat.

Transport was sorted to and from our car, parked in quaint Havelock, by Link Bus owner-operator Helen Coleman, who’s well used to ferrying trampers with their four-legged friends to the start and from the finish of the Nydia Track in the stunning Pelorus Sound.

Together with two other trampers, our family of five boarded her immaculate Ford Transit for the 30-minute transfer to Kaiuma Bay. I remembered a similar sense of trepidation when taking toddlers to a restaurant and hoping for best behaviour, but by the time we’d reached the trail, Willow had got off to a great start, sitting contentedly through the winding half-hour drive. 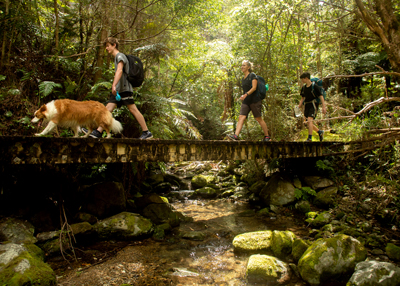 It was only 10am but already 24 degrees as we set off across the meadow. The recently mown path led into a shady expanse of native bush. There were definite advantages to being the leash-holder of an energetic puller when heading uphill with backpacks. Our bags were comparatively light though, since an advantage of staying at On The Track Lodge was not needing to carry food or sleeping bags.

Grateful for the shade of the forest, we were serenaded by cicadas, bird call and the hum of bees. We encountered two other dogs walking their humans in the opposite direction, a welcome sniffing experience for Willow. With our Department of Conservation dog permit she was able to enjoy running alongside us, at times testing the five-metre-long retractable lead we’d bought especially for the occasion. A carpet of pine needles and beech leaves cushioned paws as the path wound through the forest and passed over small bridges crossing bubbling streams.

So dense was the cover I’d almost forgotten how sunny the day was until, in parts, ferns were highlighted by long shafts of sunlight through gaps in the canopy. Giant trunks of beech were wrapped in vertical spindly, vine-like roots sent down by lofty epiphytes.

As the path steepened towards the saddle, Willow remained fleet-footed and far more interested in an edible treat at the top than the magnificent views that captivated us. It was our first tantalizing glimpse of the almost glacial blue waters of Nydia Bay.

Over the saddle, the cacophony of cicadas must have been tough on an animal with such sensitive hearing, but our hound still seemed thrilled to be part of the gang as we passed through kānuka and neck-craning beech. We emerged into a rolling meadow, where a thick veil of bees circled above colourful hives at the fence line.

After crossing the stile at the Sound’s edge in Nydia Bay, it took less than 20 minutes to reach the rustically stylish On The Track Lodge. We were greeted on the deck by manager Adrian, who delivered cups of tea and homemade muffins, while Willow was offered a cooling drink and pats from fellow manager Kayla. The off-grid gem, only accessible via the path or water, offers a variety of accommodation, including cute wooden two-storey cabins and a masterfully converted en-suite 1930s train carriage. We were booked into the yurt ‒ glamping at its best! Inside, this immaculate circular structure was bright, fresh and spacious. Wooden beds were decked out with comfy mattresses and plump pillows sporting crisp white linen, and the colourful curtains picked up the accents of the beautiful russets and reds of the grain in the varnished wooden floor.

We were staying two nights, for a rest day in the middle of our trek, to enjoy the idyllic location and make the most of the accommodation’s facilities, including kayaks and paddleboards, hammocks, and muscle-soothing hot tub. At every turn there were surprising and delightful details – decorative shells inlaid into the flooring of the bathrooms, carved animals in the deck’s timbers, beach-combed bottles used to help create ornate structures in the least likely places. Love, energy and creativity had clearly been poured into this tranquil and welcoming place.

Holidaying canines are regularly welcomed by the lodge’s resident Jack Russell terrier, Bob Dylan, happy to share his territory, and even his bunk room, although on this occasion he’d been taken on his own holiday. To our surprise, our usually indoor hound happily bedded down on the veranda outside our yurt (dogs are not allowed inside the buildings), but not before she’d refuelled with her usual biscuits and the rest of us had dined on Kayla’s delicious chickpea chilli, creamy broccoli salad and mouth-watering brownies.

Though meals were provided, guests were responsible for washing their own dishes in the communal kitchen, helping create a hut-style sense of camaraderie, swapping stories and tips for where to find nearby swimming holes and off-shoot walks. 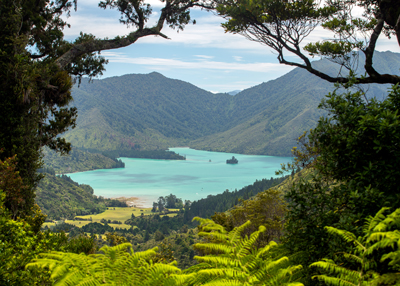 One trail Tim and I followed the next day took us an hour along the old tramway to reach a pretty waterfall. Teenagers Felix and Charlie instead stayed to keep Willow company, plunder the lodge’s extensive library and take a run to the jetty further around the bay. That afternoon we shattered the peace with a water fight while playing on the kayaks and paddleboard. A warming soak in the bush hot tub as raindrops fell, followed by blissfully hot showers was a perfect way to warm up before another of Kayla’s delicious meals and the best night’s sleep in a long time.

We breakfasted on eggs from the resident free-range chickens and collected picnic bags pre-prepared on our behalf.

It was rush hour at the community jetty as we set off, with a small group – including three lively dogs – gathering to board a water taxi for Havelock.
The path led around the bay up to Nydia Saddle, through lush, shady gullies with mature podocarps. One giant rimu’s trunk was so broad it would have taken the outstretched arms of at least three of us to encircle it. Throughout, Willow patrolled between the leader of our pack, back to tail-end, or beside whoever held the most promise of food.

As we descended into Duncan Bay, thick tree roots fractured the path. This is also a mountain biking route, though in places some steps were a stretch even on foot. We passed a couple carrying collapsible chairs and fishing gear, and out in the bay, a jet ski buzzed.

When Helen arrived to collect us we sank into the seats of her Transit, happy with our achievements but also relieved to rest and share our tales. Ironically, after the day’s 16km walk, the only one sleeping through the hour-long journey was our energetic five-year-old.

Reported by Fiona Terry for our AA Directions Autumn 2021 issue

A journey from Queenstown to Christchurch takes in the unique colour and beauty of the South...

We visit one of New Zealand’s most remote fine dining restaurants.

Dogs must have a permit from DOC to walk Nydia Track and must be kept on leads. Pick up an AA Traveller Must-Do’s Walking Guide from an AA Centre or download the digital version where you'll also find more travel ideas in Marlborough Sounds.