London would have felt like the centre of the world to the 18th- century writer Samuel Johnson when he famously declared that anyone who tired of the city was tired of life.

Today, the world flocks in ever-increasing numbers to his beloved city, drawn not only by its layers of history and pageantry but also by its resilience and constant regeneration. Step out on the pavement and you feel the exhilaration of a city that propels itself forward.

Ancient monuments are treasured. Modern ones are celebrated. A ride on the London Eye reveals a skyline pierced by 21st-century structures like The Shard across the river from venerable St Paul’s Cathedral. To the west on either side of the Thames, soaring cranes pinpoint ambitious shop, office and residential transformations underway at Battersea Power Station and Victoria Station.

To the east, radical regeneration has been converting former slums into fashionable neighbourhoods.

And it was in an easterly direction that I set off on a hired tandem bike with Emilie, a London-based niece, who assured that her inner-city borough of Hackney was no longer the murder capital of London. Hackney was now hot.

We hadn’t long been cycling along Regent's Canal when I began to sense why she was an east London devotee. The waterway was alive with birds, trees, walkers, cyclists. Many were on ‘Boris Bikes’ nicknamed for London’s energetic former mayor who championed the city’s bike hire stations. Three years ago there was a smattering of riverboats on the canal. Now they are docked bumper to bumper. Some are floating pubs and restaurants. Yet the canal ambience feels like a haven amidst a dynamic city.

Constructed in 1812 as part of the Grand Union Canal System, Regent's Canal runs 13.5kms across London from Little Venice to Limehouse on the Thames. Our stretch ran from Regent’s Park across the heart of Islington. The canal used to pass through some of the worst areas in London. But by the 1960s, road and rail were taking over its commercial transport role. Modern riverside apartments have replaced dingy 19th-century warehouses and factories.

Innovative cafes like The Proud Archivist on the edge of the canal offer a menu of cultural events as well as food. Home-office workers use the free Wi-Fi and workspace while sipping coffee.

The manager says gentrification is the wrong word to describe the changes in this slice of London.

“We are quite simply the East. And the East is where it’s at,” he says with cool confidence. 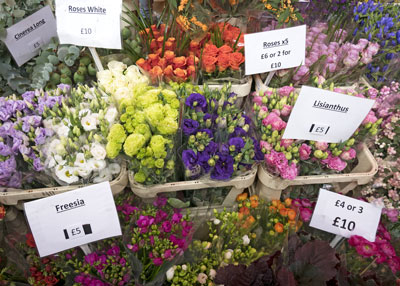 The talented New Zealand chef, Peter Gordon, agrees. The owner of Providores and two other popular London restaurants lives in Hackney and we visited him in his attractive house where a photographic shoot for his latest book had just taken place.

“I used to live in Colombia Road,” Peter says, referring to the nearby street which people throng to every Sunday morning for the riot of colour and fragrance of cut-price flowers and the banter of the flower sellers. “Then I found this place in Beck Street, known as Death Mile in the 1970s and destined for demolition. But it was spared and now, like Ponsonby, prices have doubled.”

Peter’s house is close to Broadway Market, which he regards as the best food market in London and where he and a couple of other enterprising New Zealanders have food stalls. While biting into a crème br^lés doughnut from Peter’s Crosstown Doughnuts stall, we toured Broadway Market. The place was alive with indie bands, buggies, dog walkers and colour at every turn.

Peter introduced us to Hill & Szrok, butchers by day, restaurant by night. They sell quality cuts until 6pm and cook them for diners from 7pm. The free-range meat is sourced from small English farms and the butcher adapts the menu to what is available each night.

“It makes you creative,” he says.

Creativity is pervasive in this rejuvenating part of London. “There is a thriving art scene and always something new happening here,” Peter says.

He recommends people should visit now, before the corporates set up shop.

From Broadway Market Emilie and I cycled over to Colombia Road and succumbed to decadent pastries at Lilly Vanilli Bakery on a quieter side street of stylish little furniture shops.

Then back into the jam-packed vibe of Columbia Road’s flower market before cycling through Victoria Park, the first of London’s magnificent public parks to be established. It borders Queen Elizabeth Olympic Park, created for the 2012 Olympics, and it was to this former industrial wasteland we next headed.

“Don’t be put off by some still rundown pockets. I live here and even I can’t keep up with how fast things are changing,” says Emilie, waving an arm towards a new eatery in Hackney Wick called Counter Café. Its New Zealand and Australian owners have set up in a spacious gallery on the Lee Canal, smack in a formerly derelict area. “You can sit on our tropical pontoon and pretend you are on Waiheke Island,” say the owners who belong to a growing number of New Zealanders who have successfully introduced home-made food and great coffee to London.

Allpress and Ozone in nearby Shoreditch have done the same. And taking advantage of the exciting development over in southwest London around Victoria Station is New Zealander Jodie Whitelaw. Her café, Iris & June, (named after her mother and grandmother), has hit the spot with Londoners.

“I’d never heard of Hackney Wick when I came to London a few years ago”, Emilie says, displaying her talent for keeping our tandem on course while waving towards old buildings infused with new life. “More and more of its old warehouses and disused factories are being converted into art and design studios. And every August, Hackney Wick has an arts festival called Hackney WickED.”

The Olympic Park was in view when we parked the tandem at another popular canal-side café and bar called The Crate. It has opened in The White Building, a centre for art and technology. We sat down for a pint beside a woman who works in Kings Cross St Pancras overlooking Regent's Canal and where massive regeneration is transforming the area.

“I paddleboard to work from Paddington along the canal. I’ve a fold- up board that can go under the desk,” she says, as we all tucked into sage, truffle and Moroccan lamb pizza and pints of home-brewed beers.

The sun was setting when we cycled into Hackney’s Victoria Park Village, one of the few intact old villages left in London. It’s a couple of centuries removed from Netil360, a nearby rooftop bar with rentable workspace, free Wi-Fi and live music at the weekends. But in northeast London, the co-existence of old and new is an art form.

Reported by Susan Buckland for our AA Directions Autumn 2020 issue

Thirteen-year-old Riley Hathaway is fast becoming New Zealand’s own eco-star. Along with her father Steve, an...

To sort out an International Driver Licence before you go see:
aa.co.nz/drivers