On a roll aboard the TranzAlpine

Kathryn Webster takes the luxury option aboard the famous TranzAlpine.

Initially, we couldn’t stop laughing. The contrast between what we’d been doing and where we then landed was extreme; we reacted in a slightly hysterical way.

We’d landed on the TranzAlpine, seated in the luxurious comfort of a Scenic Plus carriage, being presented with cheese platters laden with delicious tid-bits and being asked to choose wine. The utterly professional and super-friendly stewards either didn’t notice or did a very good job of pretending not to notice our daggy clothing, damp hair and soggy shoes. They welcomed us on board at Moana and directed us to the rail equivalent of business class; from that point on we couldn’t wipe the grins off our faces and it turned into a bit of a giggle-fest. 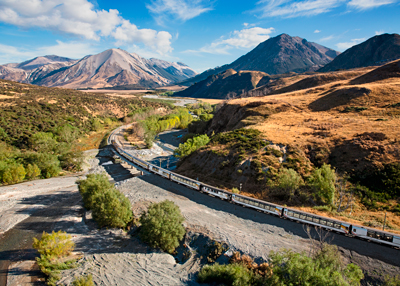 My sister and I had been cycling on the West Coast. After a four-day tour, we’d opted for one last burst of activity riding a few kilometres into Moana, where we were meeting the train to get back to Christchurch. The skies had opened up, letting several days of pent-up rain out in one generous flourish and while we were equipped, we weren’t very well equipped. We got pretty wet.

In classic Kiwi fashion, it didn’t matter. Some of the other passengers in Scenic Plus had flashed-up a bit, making an occasion of this special journey, but others were casual – albeit not quite as casual as us. But we were made to feel at home and quickly got into the right mode: enjoying the rolling beauty out the window, keeping an ear on the running commentary, chatting with the stewards and indulging in the victuals.

Our steward was Gary, formerly a flight attendant for Virgin International. He’d been grounded, due to Covid-19, but was thoroughly enjoying this gig, looking after Scenic Plus passengers and entertaining with his charm and hilarious story-telling.

When we boarded, the TranzAlpine was already an hour into its four-and-a-half hour journey across the South Island. Wide river valleys stretched away to soft-coloured hills that steepened and folded into a rugged, mysterious distance climbing away from the coast. 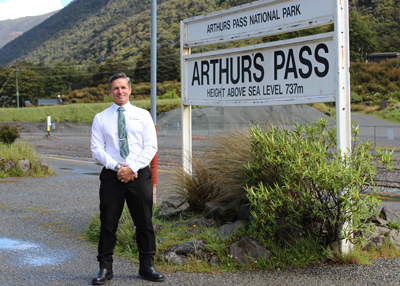 Soon, the train was climbing too and rounding deep-shadowed corners, edging up toward the mountains. Then we slid into the incredible Otira Tunnel – climbing eight-and-a-half kilometres in darkness; everyone hushed, stilled, waiting to emerge.

At Arthur’s Pass the train stopped for a while and we climbed out to feel the cool of the air. We were right in the thick of it here – in the midst of incredible, other-worldly beauty with mountains rising around us and the sky close. Trails lead away into valleys; the landscape seemed altered by the seasons. We could sense the winter snow line and imagine the short days.

Back on board, another drink? A Kiwi beer or another wine? Thank you, yes – and more food! Canapes of New Zealand: Marlborough salmon blini, lamb roast, tiny Kiwi bacon and egg pies. A delicious light meal of chicken on roasted vegetables.

Out the window the land revealed itself in another fashion, another channel, clearly heading east but still mountainous as we dived into several short tunnels and crossed several viaducts with views of aqua-blue rivers winding in ribbons over broad stony river beds. Down into Springfield we went, then across the plains, where rain streaks across the train windows. Rain fell in Christchurch, too – but nothing could spoil our high spirits.