On board KiwiRail's TranzAlpine: The world out your window

Kim Triegaardt takes a scenic journey across the Southern Alps.

The world circles past your seat when you’re on a train. Not outside, but inside.

There’s someone from everywhere. An A-Z of humanity – Australians, Brazilians, Canadians and even a Zambian (I know, because that’s me). On this train, the TranzAlpine, everyone heads in wobbly single file, rocking with the motion of the train to the back carriage. They are wide-eyed and grinning on their return.

The TranzAlpine’s winding journey from Christchurch across the Canterbury Plains and up through the Southern Alps to Greymouth on the West Coast regularly features in the top train journeys of the world.

Part of the thrill is the wind-blown open air back carriage where you can literally feel the world rushing past as the train hurtles between the chill of shadowed mountain valleys and then sun-drenched river beds; across precarious viaducts, past lush green paddocks and through blackened tunnels. Cameras lift in unison and shutters fire as the train rounds a bend and there’s a view of the engine way ahead determinedly pulling its bright yellow carriages behind it.

The carriages are a much more comfortable and less windblown way to take in the view. The TranzAlpine recently had a makeover and the seats are comfy and spacious. There’s a well-stocked café with great coffee. A running commentary lets you know when you’re approaching points of interest. Did you know, the town of Cass is still a town of just one? Made famous by Rita Angus in her legendary 1936 painting, the Cass railway station is staffed by a man named Barrie.

The sole resident of Cass has lived there for nearly 30 years and worked for KiwiRail for nearly as long. 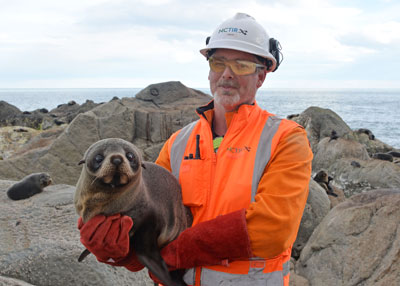 Time on a train passes in a series of snapshots framed by big picture windows. There’s a farmer waving lazily from the window of his truck while he waits at a railway crossing. Two wood pigeons in a tree. And over the hypnotic soundtrack of the train, there is the delighted laughter of a young boy watching fat-bottomed sheep bounding away from the track and then gasping with the thrill of seeing another train rush by within kissing distance the other way.

Blink and the scene in the frame changes. Look up and you’ll see glossy meringue-white mountains towering above you. Look left as we pass over the Staircase Viaduct and it’s a heart-stopping moment as beside you the ground drops away 75 metres to the ice blue ribbon of the Waimakariri River – which means cold water in Māori – wrapping around the folds at the base of the cliffs.

What is more difficult to see from the train is the fascinating engineering behind the service. There are four major viaducts that hold up the line as it hauls its way across the mountains. It’s incredible to think that men with just picks, shovels and the most basic of machinery built these structures in the 1890s. It took miners 10 years to build the Ōtira tunnel alone. Two groups started on each side of the pass and hacked their way through ‘rotten rock’ until they met in the middle. When it opened in 1923, the tunnel completed a railway line that had taken 40 years to build and finally join the east and west coasts of New Zealand’s South Island.

In contrast, it’s taken just two years for KiwiRail to fix over 200km of the Main North railway line that the TranzAlpine’s sister trip, the Coastal Pacific, runs on. It was damaged in the 7.8 magnitude earthquake that hit Kaikōura in November 2016. There were close to 60 major damage sites including tunnels, bridges, embankments and the line was buried under more than 100 slips and landslides.

Approximately 60 bridges were damaged and repairs were carried out at more than 750 sites.

For Walter Rushbrook, General Manager Strategic Projects KiwiRail, the project was a huge logistical challenge. “At one stage we had more than 20 helicopters in the air dropping water from monsoon buckets over the cliffs to sluice off unstable rock. They were followed by teams of abseilers who worked their way down the cliffs clearing off remaining loose rocks.”

Walter tells me that the abseilers also played a key part in rescuing the last of the rock daisies of Ōhau Point. “It’s the only place in the world that you find them. We managed to rescue some that have been now successfully propagated and we’ve reintroduced them to the area.”

And never mind fat-bottomed sheep that run away, the teams working on new sea walls to carry the re-routed road and rail lines, needed a team of seal-wranglers equipped with protective gloves to ward off fat-all-over and highly indignant seals, grumpy at their sleeping spots being disturbed.

Road and rail have been moved away from the base of a major slip, leaving space for a bund to be built to catch any future rockfalls.Netting and mesh designed to stabilise slopes has been bolted into the rock on a scale unprecedented in New Zealand.

“If there is a slip,” Walter says, “there are special monitoring fences at the bottom of the slopes that alert the control room so we can stop the train.”

Unlike on the TranzAlpine, this is engineering you’ll be able to see from the window. I can’t wait for the Coastal Pacific to be running again and hope the train is full so I can share my fellow travellers’ excitement of views that this time will be of wild shores, manicured vineyards; the towering Kaikōura range and happy seals.

Reported by Kim Triegaardt for our AA Directions Summer 2018 issue

The TranzAlpine travels 223kms one way, taking just under five hours. It leaves Christchurch early each morning, spends an hour in Greymouth, then makes the return journey through the Southern Alps to reach Christchurch at 6.30pm.

The five-hour Coastal Pacific journey between Christchurch and Picton re-opens on December 1.

The TranzAlpine and Coastal Pacific are Great Journeys of New Zealand, along with the Northern Explorer train between Auckland and Wellington, and the Interislander ferry across Cook Strait.

AA Members get 20% discounts on Great Journeys of New Zealand (with exceptions). Visit an AA Centre or go online at AA Traveller to book.