On the road delights

Tim Warrington is chased from Wellington to Wairoa by wild weather.

According to the weather forecast, there’s a tiny piece of blue sky somewhere north and I am determined to find it.

From Wellington, I will tiptoe through the rain-sodden Manawatu Gorge and head inland along the Classic New Zealand Wine Trail then on to Wairoa and the legend of the golden fish and chips.

It’s slow going at first, skirting slips and earthworks from the storm. I’m heading for Woodville, but my thirsty, troublesome Fiat begs to stop in Featherston to join a smorgasbord of drivers filling up at the pumps. A taciturn mechanic hammers violently at my broken wiper. He seems surprised when it falls off, then shoos me towards the nearby Everest Café while he sorts repairs.

Despite the roll-neck weather, I perch outside to soak up the picture of the world autumn has daubed with umber and vermillion. A hedgehog, fat as butter, totters along the pavement. Drunk? We are in pinot territory. Or simply disorientated by the storm? I offer it a saucer of milk.

I sip my latte, delighting in the restorative properties of the bracing Arctic southerlies which recharge me for another stint behind the wheel. My prickly friend seems rejuvenated too, and wanders off.

Mr Feather’s Den: Oddities & Delights is an unexpected treasure. A cluster of taxidermied mice catches my attention. Give me a stuffed rodent in a full ballerina skirt and I’m on board; Mermouse and Patrick the sporran-clad Highlander, winsomely framed in a mildewed hutch, are not without their charms either.

I wonder if the adjacent fromagerie, ‘C’est Cheese’, was established to feed these little neighbours.

Not surprisingly, for an establishment that stocks more than 100 varieties of cheese, the heady aroma socks me in the sniffer like a sledgehammer. It also seems to obliterate all retail constraint. I spend up big. I’m in love with the Kingsmeade Sunset Blue from Masterton, and the apple mustard jelly, and the rye wafers and the teeny tiny, toasted brioche…

My credit card groans as I enter my pin, so I take the hint and leave Featherston without returning next door to purchase the grim reaper mouse, the elaborately bevelled Frida Kahlo mirror or Mildred the stuffed chicken.

I trundle off in my cheese-filled car past thickly stoned cottages and civic buildings. Early settlers in the area flexed their muscular Christianity, building many handsome churches hewn from local stone.

By the time I arrive in Woodville I am high on blue vein but sobriety is quickly restored by the beguiling vista of antique stores. Hidden among factory-made goods of the most ordinary kind, I discover a refreshingly arty headpiece: a trans-seasonal hybrid deerstalker/baseball cap. Perfect.

After several hours of ooh-ing and aah-ing over the Aladdin’s cave of treats on offer in Woodville I spot a studio tucked away down an alley. Sidestreet Gallery is a symphony of artistic delights. Some are familiar: acrylics, charcoals, chalks, sculptures; and the less familiar: road kill art, the outline of a starling corpse, a crime scene in miniature.

Artist Nick White assures me it’s a fragrant, rather unpleasant exercise. And I do not doubt it. 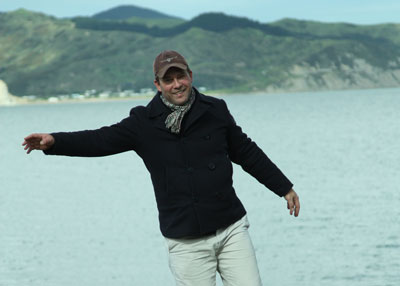 The caprice continues beyond the gallery into the rear workshop, which Nick allows me to explore. Just- begun and half-finished pieces fill the airy space, everything covered in a layer of dust, like the art time forgot. Very little seems complete.

I am undecided whether Nick is a dreamer or a perfectionist or both, but his art is heaven and I leave Woodville with my head in the clouds.
I am Napier-bound.

On arriving, I am once again hostage to the weather, and the spangled music of the Dixie Chicks. It seems all of New Zealand has come to
hear them yodel and duel their banjos, and there is no room at the inn.

In wet weather the Napier to Wairoa stretch of road is a punishing duty of concentration, but 90 minutes later I arrive and it’s worth it. Every hairpin, every slip, every passing lane and logging truck: worth it. Wairoa greets me in her Sunday best.

Cloudless skies and delicate autumnal sunshine dance off the copper dome of the recently refurbished lighthouse. In a rare victory of common sense, Wairoa’s iconic lighthouse dodged the scrap heap after retiring from Portland Island off Mahia Peninsula. It was upcycled to its present location on a reserve at the heart of the town.

The museum has been spruced up too, and the heritage colours complement the colonial architecture gracing Marine Parade – the town’s main drag. Great ranks of handsome Norfolk pines garnish the riverbank and the meandering walkway, which is popular with walkers, runners and cyclists. It extends several kilometres to the mouth of the river, the lookout at Pilot Hill and beyond to Whakamahi Beach. Once a busy port town, the bustle of river trade has long since faded, but parts of the huge wharf remain.

It’s impossible to argue with my braids of DNA; I head to the second-hand shops. At Robinson’s Trading my eye catches a tarnished butter knife, heavy with a hundred years of grime.

Later, after a polish, the hallmarks of early-Victorian, Birmingham solid silver are revealed. Further down the road is D&D Secondhand Furniture, a maze for retail rummaging. There are blonde oak and rimu treasures by the score, and a petite cocktail cabinet (now stuffed with cheese) nestles in my passenger seat and joins my adventure.

It’s well past the tourist season, but still the motorhomes come and jostle for a prime position overlooking the mighty Wairoa River. Only a year
ago Wairoa was declared motorhome friendly, indicating there are plenty of camping sites around town; as I try to discuss this with a backpacker, he shoos me away. “Don’t tell anyone, they’ll all want to come here.”

At the far end of Marine Parade is the Gaiety Theatre complex, another gem saved from the wrecking ball by a group of local entrepreneurs. There’s the cinema, the Saloon and the Eastend Café and Bar. The café sparkles brightest at brunchtime. Light meals and local fare served up with a chic, modern verve are a delight for the palete. You can’t leave without popping next door to the florist and giftware shop packed with treasures and trinkets. It’s the sort of place where you’ll find exactly what you’re looking for, without ever knowing you were looking. 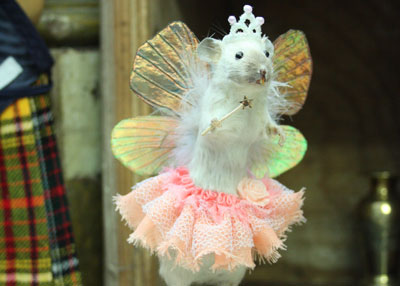 Wairoa is very walkable, and as I saunter back down Marine Parade I begin to get a feel for its rich history and proud cultural heritage. Once upon a time guidebooks described Wairoa as little more than a petrol stop and place for pies. And while Osler’s Bakery still serves up sublime pastry goods, there is so much more to this little town:

Rocket Lab, a film school in the making, a world class recording studio and mountain bike cycle track to name a few.
The Long River Gallery houses a collection of locally made artworks, much of it influenced by the driftwood for which the region is famous. I pop in for a nosy and naturally want to buy everything.

I leave and cross the bridge to North Clyde, to the gold at the end of my rainbow. The fish and chips here are legendary, and there are two to choose from: The Ponderosa Fish and Chip Shop and Tui Takeaways. Never one to pass up a taste test, I sample both and both deliver the Midas crunch.

Discovering Wairoa has been a delightful surprise, the sort of thing that gives travelling a good name. I could have ended my adventure in Napier – many people do – but the beauty of a real adventure is making less obvious choices.

Wellington to Wairoa in Hawke’s Bay is 428km

• Hawke’s Bay has over 100 vineyards, many with cellar doors and restaurants.
• Orchards sell fruit and honey at the gate and farmers’ markets specialise in locally produced, fresh food. Stock up as you go.
• If you’re travelling in spring, swing into Taniwha Daffodils off SH2 in Central Hawke’s Bay. Pick a big bunch to take home and buy a picnic on-site to enjoy surrounded by flowers.

• Enjoy the walkway and cycleway stretching the length of the town’s riverbank. Grab a bite or a coffee to enjoy in a sunny spot at the water’s edge.
• Explore Whakamahi Beach, where the Wairoa River meets the coastline.
• On Marine Parade, you'll find Wairoa Museum which has  recently been refurbished.

Wairoa became a motorhome friendly town in 2016 and there are now plenty of camping sites available.

Reported by Tim Warrington for our AA Directions winter 2017 issue

visitwairoa.co.nz aatraveller.co.nz  for more places to stay in the area.