Monica Tischler explores the aptly named Bay of Plenty on a road trip from Tauranga to Ōhope.

Behind me on a grassy verge is one of New Zealand’s oldest heritage sites and before me stands the country’s largest port, where towering cranes compete for airspace with motorway flyovers and containers are stacked high like colourful blocks of Lego.

Tauranga is a city of juxtaposition: where history meets the ultra-modern, and tranquil landscapes transition into industrial. It’s at The Elms Te Papa Tauranga, a former mission station, where I get a sense of the collision of ages.

Arguably the region’s most iconic landmark, Mauao or Mt Maunganui, is barely visible behind the reclaimed land housing the port however, on a guided tour at The Elms, I’m shown an old photograph of uninterrupted views of the harbour and mountain taken from where I now stand.

I listen to stories about times gone by; how in the 1930s, the cottage and gardens shrouded in lofty chestnut trees were home to Reverend Alfred Brown and his family. His wife taught Māori people to read and write, use new tools, grow new crops and prepare new foods.

The small cottage is complete with original furnishings including an old piano, which is said to have been strapped up on the panelled ceiling to allow for extra room when guests stayed, and a wooden box filled with miniature glass medicine bottles.

While stepping inside The Elms is like entering a time capsule, Tauranga itself is a city on the rise. Bayfair Shopping Centre used to be the go-to destination for all things retail, but Tauranga Crossing Mall, complete with terraced dining, has taken over. There’s a city centre precinct under construction touting ‘downtown luxury living’ with close to 100 apartments and shops.

I follow colourful hanging baskets and striking street art to Tauranga Art Gallery. Inside, I’m met with contemporary displays alongside the exhibition, A Woven History. In partnership with The Elms and Tauranga Heritage Collections, it showcases archaeological findings from around the Bay of Plenty.

The Historic Village is another nod to the past with its delightful vintage shop facades and buildings including an operating cinema. While tempted to stay, I also yearn to venture further. Stopping at Mossop’s Honey, I order a mānuka honey ice cream, a bespoke flavour only available instore, made by renowned ice cream makers Kohu Road in exchange for supplies of the liquid gold.

A half hour’s drive down the coast lies Papamoa Beach. A cute van parked up overlooking the surf break and serving ‘brews with a view’ provides an excuse to stop for coffee and stretch my legs.

Continuing south along the 110km/h stretch of State Highway 2 is an opportunity to test the power of the new Honda I’m driving. I flick the vehicle into cruise control and absorb the views: rows of kiwifruit vines and roadside stalls overflowing with avocados, lemons, tangelos, honey and even bags of sheep poo.

Steering left down Maketū Road takes me to its namesake seaside village where horses graze in paddocks and a group of youths congregate on the forecourt of Maketū Landing. Curious, I wander closer and realise there’s something worth tasting. The famous Maketu Pies made its humble debut right here and continue to be lovingly baked in the bakery next door. The family business prides itself on old-fashioned values; many of the skilled pie-makers are third generation. I read this on the wrapper before tearing it off and devouring the contents.

I pass through Matata, a small community, home to a hotel, campground and a little shack called Drift that serves organic coffee. Leading travellers to Whakatāne is a road edged with towering cliffs cloaked in beautifully craggy pōhutukawa trees. 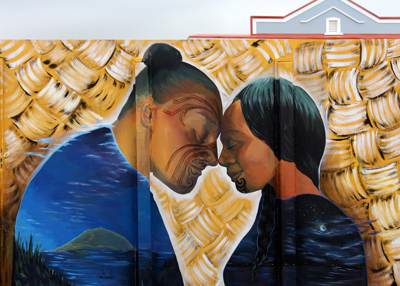 Regularly taking the title of the country’s Sunshine Capital, it’s fitting that the low-slung cloud parts to reveal clear skies. Mataatua Wharenui, a striking marae with an equally remarkable story, draws me in.

Known as ‘The House That Came Home,’ the intricate structure is the country’s only repatriated Māori meeting house, having spent more than a century overseas. The marae was built in the 1800s as a gift and expression of goodwill for Queen Victoria. It garnered interest from the Crown and not long after was uplifted by the Government and sent to an international exhibition in Sydney, where those ignorant of Māori customs erected it inside out. It later travelled to Melbourne and London before it was showcased in Dunedin’s Otago Museum and finally returned home to the Ngāti Awa tribe of the Eastern Bay of Plenty.

Children splash in waves crashing near the mouth of the Whakatāne River with Wairaka – a bronze statue atop Turuturu Rock – watching over them. The whimsical figure commemorates the bravery of Wairaka, the daughter of the captain of the Mataatua waka, which arrived at Whakatāne from the ancestral homeland of Hawaiki more than 600 years ago.

It’s said the men left the women alone in the canoe while they went ashore. The waka began to drift back to sea and Wairaka, defying the tapu that forbade women to handle a canoe, seized a paddle and steered it back to safety, calling: ‘Kia Whakatāne au i ahau.’ Her cry translates to: ‘I will act the part of a man’ and is how the town got its name.

There’s a special spot a stone’s throw from Whakatāne that’s been given an impressive accolade. A sign reads that AA Traveller awarded Ōhope bragging rights as New Zealand’s most-loved beach. Wanting to form my own opinion, I take a walk along the smooth stretch of coast west towards the secluded Ōtarawairere Bay, complete with a tipi constructed of driftwood, and decide that yes, the honour is most definitely valid.

A word of thanks

The writer travelled in a Honda CR-V Limited 7. The seven-seater vehicle with an ANCAP five-star safety rating is perfect for families and lengthier journeys, with leather interior and turbo engine adding extra style and comfort.