It’s astounding how the humble silkworm has shaped history.

After ingesting the leaves of a mulberry tree, the worm spins a delicate cocoon made from a single thread of raw silk.

To extract the fibre, the cocoon is dissolved in boiling water and transformed through a spinning reel. 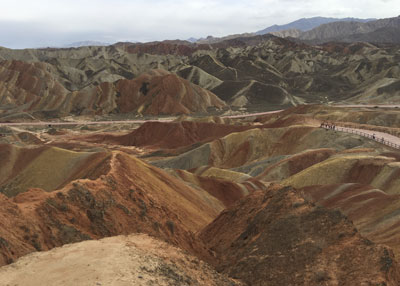 I absorb nature’s phenomenon and the history associated with it as I travel along the stretch of land where trading of the precious cloth began: China’s Silk Road.

The 4000km long route was initially the main artery for business and trade: a pathway connecting east to west.

Four of China’s major contributions to the western society were introduced via the Silk Road: papermaking, printing, gunpowder and the compass.

It’s since become a popular route for tourists to marvel at oriental treasures and unique scenery; along what’s described as a string of pearls on a beautiful necklace. I’m excited to discover some of the gems along more than 1000km, from Lanzhou, the capital of Gansu Province, to Dunhuang.

I travel the first leg of the journey in a fast train west across to Zhangye. Speeds reach up to 300km/h and snippets of ever-changing terrain are captured when the train resurfaces from underground tunnels; it’s like looking through the viewfinder
of a camera.

Holes dug into dusty brown cliff faces are reminders of tougher times; when people couldn’t afford materials to build homes, they survived in the earth. The caves kept cool in summer and warm during winter. Now, there are shanties set up on the flat planes beneath the towering Qilian Mountain ranges.

The Zhangye Buddhist Temple or Sleeping Buddha is the first gem to discover. Inside beautifully detailed temple doors lays a 34-metre-long Buddha built more than 900 years ago. It’s the only temple that wasn’t destroyed during the six-decade Mongol invasion of China in the 13th century. That war is one of the reasons the Silk Road decreased in popularity. Today, with the completion of a four-lane highway, it’s used more than ever before.

The hot air is thick and wraps around me like my own silk throw; swallows zig-zag through the sky like delicate paper kites.

I move on, travelling by coach, to Danxia National Geological Park. ‘Rainbow Mountains’ were formed 140 million years ago from a mix of salt and oxygen. Camels sit on the dusty flats.

A fellow traveller unlocks a small suitcase and pulls out a trumpet. He begins to play What a Wonderful World. ‘It sure is,’ I think, gazing across canyons of striped mountains stretching as far as the eye can see. Hues of reds, earthy yellows and browns create a kaleidoscope.

Journeying further west along the Hexi Corridor, the strip of road divides the scenery in stark contrasts. On one side are the towering snow-capped Qilian Mountains, meaning heaven, or God; sand dunes protect Mongolia on the other. Patchwork squares of bright-yellow grapeseed fields stand out among the greenery. Rickety bicycles are propped up against fence posts, the owners crouched nearby, their conical straw hats catching the sunlight like satellite dishes.

The coach reaches Jiayuguan Pass; the first pass at the west end of the Great Wall of China. Running my fingers along the rough wall gives me goose bumps. It’s astounding to think of the history these foundations have witnessed. 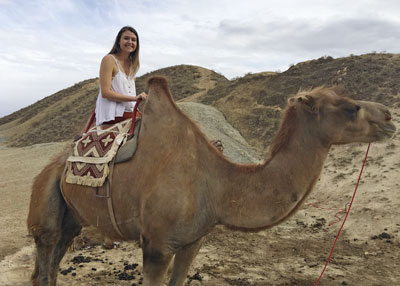 “The Silk Road is a pearl necklace and Dunhuang is the diamond,” a local says when he hears I’m headed there. I struggle to think of anything more beautiful, given the gems I’ve already encountered.

History continues to fascinate as I travel into the Gobi Desert and explore the Mogao Grottoes. More than 700 caves dug into a cliff face are little treasure troves, telling stories otherwise forgotten in time. Over thousands of years, monks, aristocratic families and Buddhist pilgrims constructed and decorated the caves with intricate wall paintings and sculptures. The Silk Road wasn’t just used for transporting goods; fashion trends and religion were introduced to China via the route. Paintings on the cave walls depict Chinese women wearing dresses with traditional patterns from Persia.

A sandstorm is brewing. It creates a thick film of dust over Dunhuang. But it’s not enough to stop exploring. I wrap a scarf over my head, put on my sunglasses and a dust mask. Sitting atop a camel in the Gobi Desert is a nod to what transport was like here years ago. It’s almost therapeutic, moving in time with each lethargic slump of the camel’s step. Light rain starts to fall as I pass Crescent Lake, a pool of water seemingly out of place in a hot desert. I spot dark blobs in the water: carp.

The Silk Road is likened to a string of pearls yet I’ll leave here with invisible diamonds: the most rare and precious of kinds.

A night under canvas

To make sure you're covered before setting off see:
aa.co.nz/travel/insurance