It’s a serenely grey Wellington day and my assault on the Remutaka Cycle Trail is about to begin.

As part of Nga Haerenga, The New Zealand Cycle Trail, it will take me past mountains, coastlines, rivers and railway relics. The Remutaka section runs from the head of Wellington Harbour, across the Remutaka Ranges, through Wairarapa and out into Eastbourne. And because I’m prone to getting lost – not something travel writers usually admit to – Stu from Green Jersey Cycles offers to guide me. I gladly accept.

Pedalling to Petone’s foreshore, we trundle through the once industrial suburb that today is a hotbed of boutiques and cafes. A collection of granite fountains, Te Puna Wai Ora (the spring of life) supplies passers-by with the purest artesian water. Summoned from the vast underground reserves of the Waiwhetu aquifer, it’s estimated that over a quarter of a million litres are drawn here each month.

After filling our bottles, we gaze across to the beach where nature had curated a most excellent exhibition of driftwood. 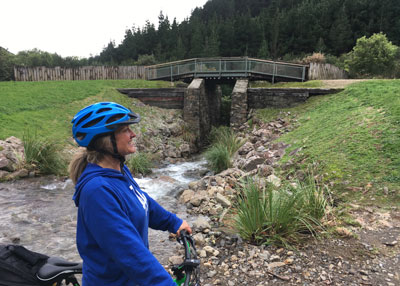 But we’re not here to ogle all the pretty sights; it’s time to do some serious cycling. We head inland towards Lower Hutt. In spite of commerce and an ever-increasing population, the harbour and adjoining waterways are apparently full of fish, as we pass several anglers hauling in decent sized kahawai.

When the trail meets the Hutt River, it hugs the rock-strewn waterway and, if time and temperature are on your side, there are some superb swimming holes to be found here.

At Te Marua we say “ka kite” to the river and 35km later we reach Tunnel Gully.The countryside is a variety of vivid shades of green, uncrowded and pastoral but, with a lot more kilometres to go before we’re done for the day, we need to press on, riding up to Kaitoke Ridge, along forestry trails shared by walkers and horses, fantails and falcons.

It’s a steady climb, but it’s never too taxing and you can always stop to catch your breath while reading the information panels that explain what life was like for the hardy railway families. For all the romance of rail and the stories of stoic pioneers making their own fun since the railway opened in 1879, when the wind blew and the valleys lost sun, from my soft, 21st century perspective, I reckon it would’ve been grim.

Fans of tunnels will love this section; there are five in total, with the longest measuring 480m. We stop to admire New Zealand’s oldest truss bridge, rebuilt following a fire in 1910, before reaching the peak at Summit Station, 1,141ft above sea level.

Pedalling on through the aptly named Siberia, the wind whistles mercilessly, but on we ride, and now it’s mainly downhill. The segment from Cross Creek to Wairarapa Moana was easily one of the highlights thanks to its bridges and classic Kiwi bush vistas and, when the world opened up to reveal that lake, sparkling like a small ocean,
it took my breath away.

Not far to go! The theme is now farmland as we ride along the lakeside, past the prettiest little church, arriving at Waiorongomai Station just as night falls. There, at Karaka Cottage, the fire is blazing, dinner is waiting, and Stu returns to his family leaving me snug by the hearth, deep in the heart of rural Wairarapa.

Following a night of rain, I wake to admire my pastoral surroundings as dawn breaks. Cows and sheep look on as I draw back the curtains on this bucolic masterpiece, but I’m not here to count sheep or dilly-dally by the fire, because I want to ride as much of the remarkable Remutaka Trail as time and weather will allow.

To make haste, Stu returns and we’re transported to the other side of Martinborough – no time for vineyards today – and we set off from Pounui, about 30km southwest of Martinborough.
One thing’s quickly apparent; Wairarapa drivers are very respectful of cyclists – giving us plenty of room and friendly waves.

Proceeding along quirky, curving country roads, lavender and toetoe wave in the wind; the birdlife is astonishing. I stop at Ti Rakau Cabins to exchange pleasantries with a giant pig who’s using his snout as a shovel to make a wallow. Turning off at Ōnoke Spit, here it’s more of an uphill battle and with Lake Ferry behind us, we grind our way to the ridge where the trees all bow to the power of the prevailing winds.

Picturesque sheep gaze implacably on and, as I wonder what they make of us humans on wheels, we roll towards the rugged beauty of Ocean Beach and those sturdy, no-nonsense holiday homes. Due to rocks, sand and slips, here the terrain is more challenging but it’s also consistently charming. The wild southern coast so utterly invigorating, it’s like being plugged into the mains. Head winds jockey with tail winds, birds work while sunshine lurks behind clouds; from serene to gale force you get all the weather here, four seasons in as many minutes and sadly before I know it, it’s over.

Emerging at Orongorongo, we did just 35km today, and while we could have ridden the final 16km to Eastbourne, it was ruled out on account of wind (it was whipping up) and light (it was going down) and I was whisked back to real life.

Flying home from that capital city, I gazed down upon a coast I was now smitten with and I promised to return, to ride the trail from end to end and back again because this intoxicating route simply left me wanting more.

Reported by Elisabeth Easther for our AA Directions Summer 2018 issue

The Remutaka Trail is part of Nga Haerenga Cycle Trail and one of New Zealand’s Great Rides. This 115km trail (grades 2-3) is full of beautiful sights and historic wonders.

Go to AA Traveller to read about other cycle trails and to book accommodation for your cycling adventure.