Road trip: at our own pace

It seemed we had the entire world ahead of us. An open road delighting with new adventures around every corner turned; vast oceans, refreshing waterfalls and impressive redwood forests literally on our doorstep.

Behind us we had our home. Our bed, kitchen, bathroom and dining area were all conveniently tucked away in a cosy space and followed wherever we went.

If we wanted to cool off from the heat that lingered in the autumnal American air, we could pull over at the nearest beach. If we needed a tea break and loo stop, we could do so right away. If we wanted to eat a sandwich whilst gazing out at the ocean without leaving the comforts of home, we opened our front door and welcomed the sea breeze in.

We were travelling at our own pace, in an El Monte RV along California's Pacific Coast Highway from Los Angeles north to San Francisco; all 400 miles of road ahead beckoned us to explore its gems.

It was dark on our arrival in Malibu from Los Angeles. Brightly lit lanterns and glowing carved pumpkins surrounded our neighbours’ mobile homes in the RV park, in celebration of the Halloween festivities.

We followed mouth-watering whiffs to find fellow campers sipping coffee and cooking breakfast on barbecues outside their RVs and caravans – some charmingly retro. We wandered to Malibu Pier, ordered fresh juice and found a rooftop veranda, the perfect vantage point to watch surfers carve the iconic three-point break. Before travelling north to Santa Barbara we joined them in the surf to cool off.

The thick heat of an unusually hot day smothered us as we walked the length of Stearns Wharf, home to trinket stores with coastal treasures, a palm reader’s studio, fishermen dangling lines into the harbour and right at the end, a seafood shack. After scribbling our names on the wait list outside Santa Barbara Shellfish Company, we finally took a seat inside, and devoured freshly caught rock crab.

It wasn’t long before the sweltering heat led us to the nearest beach: Pismo, a seaside town about an hour-and-a-half drive north of Santa Barbara. We parked and enjoyed a cup of tea in our kitchen before leaping into the rolling waves.

A landslide had blocked the coastal route up to Big Sur, so we followed Highway 101 inland. Rolling green vineyards in the popular wine regions tempted us but we kept driving, linking back up to the Pacific Coast Highway before reaching Fernwood Resort.

Beneath towering redwoods and beside a slow-moving stream was the perfect spot to spend the night. Fellow campers thought so, too; tents dotted the waters edge and other RVs parked up.

In the glow of torchlight, we hooked up to the resort’s water and electricity and walked the short distance under a carpet of stars to the on-site store before settling in for a cosy night. I had bought marshmallows to roast on the outside fire pit, but we never did venture outdoors. The warmth of our RV was lovely; we sat sipping tea and playing cards into the night.

Contrary to its name, Big Sur is a little village exuding character and charm. Close to a seven-hour drive north of the concrete jungle of Los Angeles, it couldn’t be more different. There’s an earthy, hippy vibe here.

Views from the narrow, winding Pacific Coast Highway were spectacular. We twisted around hairpin bends revealing raw and moody waves biting rocky cliffs below. Stopping at Julia Pfeiffer Burns State Park, we took the short hike to McWay Falls, a favourite of the pioneering woman whom the park is named after. The waterfall is beautiful; cascading 24m directly into the ocean from the top of a granite cliff. Not one footprint mars its perfection; the sandy cove is closed to the public.

Late in the day we watched a pale sun dip behind a screen of sea fog at Nepenthe, a rooftop bar. 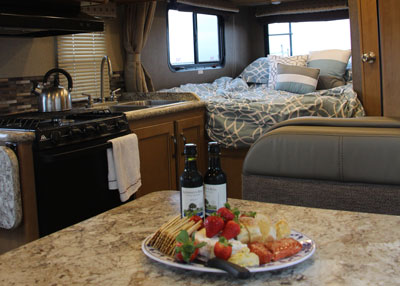 The fog still lingered come morning. It made for a remarkable drive toward Carmel-by-the-Sea and Monterey. Point Sur Lighthouse jutted out into the Pacific Ocean with grandeur; the historic stone landmark still guides ships today, although its light is now automated. As one of the top ten haunted lighthouses in America, moonlight tours and the chance to ghost spot are available here.

We were not tempted though, instead opting to wander the boardwalk of Monterey which overlooks quite possibly the liveliest little harbour; pelicans, sea otters and seals put on an entertaining show.

We enjoyed dinner that evening on Santa Cruz Wharf before joining other motorhome adventurers in an RV park for the night. Our neighbour told us that despite living only an hour away, she enjoyed the freedom, spontaneity and constant change of scenery this form of travel allows.

Strawberry fields and pumpkin patches brought splashes of bright colour to the roadside en route to San Francisco. A sign caught our attention: ‘Fresh pie – one mile.’ We pulled into an authentic farmstead selling fresh, organic produce and a delicious array of sweet pies.

Neil Young’s Heart of Gold played over the speaker and the shop assistant overheard me say it’s one of my favourite songs. I was excited to learn this was his home town and he often stops here for pie.

After some delicious sweet and spicy pumpkin pie, we journeyed on, eyes peeled for a glimpse of the famous musician. Instead, we caught sights of beaches boasting incredible surf breaks. Hikers enjoyed picnics in the sand dunes, resting after tackling a walk through the Big Basin Redwoods, California’s oldest state park in the nearby Santa Cruz Mountains.

Most of the road now lay behind us, yet we didn’t feel the least bit nostalgic. It was never about the destination, more so the journey and what we discovered along the way.

The writer travelled in an El Monte Four Winds RV courtesy of THL and flew Hawaiian Airlines from Honolulu to LA. The airline flies direct from Auckland to Honolulu five times a week.

Before you go
Driving an RV can be tricky due to its size. Navigating five-lane highways in the more populated urban areas is challenging. Familiarise yourself with road rules and use a GPS. Smaller urban roads are not suitable to navigate by RV; it’s necessary to park and catch a train or taxi to explore cities and towns.
While freedom camping is available in some areas, the writer stayed in contained RV parks and campgrounds and recommends booking a night in advance for peace of mind.

See Koa for a list of sites across America.

Get AA Travel Insurance so you’re covered on your travels.