Usually when arriving somewhere new I’m compelled to immediately set out and explore, to get the lay of the land. This time was different; we had good reason to stay indoors.

We wanted to familiarise ourselves with our home for the next few nights: The Grand California – Volkswagen’s new ‘grown up’ Kombi van.

Pulling into the campsite at Whakapapa Holiday Park, we turned off the ignition and felt our shoulders drop in relief at reaching our destination for the night. We boiled the kettle for a cup of tea, opened the back doors to welcome the whisper of nearby Whakapapanui Stream and lay down to read for a while.The outside world could wait.

The 340km journey from Auckland was effortless, buckled into the gemstone blue and white campervan. At first I had been apprehensive about manoeuvring the six-metre-long vehicle on the multi-lane Southern Motorway, but sitting elevated in the van and holding a steering wheel not dissimilar to my own Volkswagen car made the driving easy. Its size wasn’t at all intimidating.

It helped, too, having technology such as Lane Keep Assist and, as the roads widened through Waikato farmland, I flicked to cruise control. Having rested, we stepped out with Adrift Tongariro which offers guided walks in the region.

While the iconic mountains Ruapehu, Tongariro and Ngāuruhoe were shrouded in grey blankets of fog, we could sense they were close from the wind sweeping an icy chill from their snowy peaks. 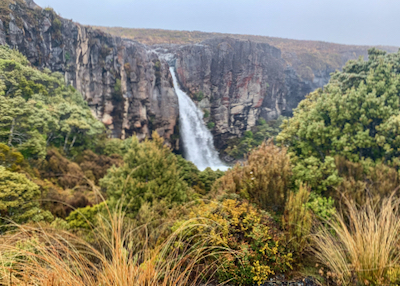 Inching our way along the Taranaki Falls Track, our guide spoke of how the region is sometimes referred to as ‘The Gift.’ In the late 1880s, the chief of Ngāti Tūwharetoa entrusted guardianship the sacred mountain peaks to the people of New Zealand in conjunction with local iwi – creating the country’s first national park.

On a clear day, Mount Taranaki can be seen at 200km due west from a point along the 5km track; today we just have to take our guide’s word for it. The lion’s roar of the swollen Taranaki Falls grew louder and we descended steep stairs to meet the beautiful beast. The wind whipped a refreshing spray onto our flushed faces.

Looping back towards Whakapapa Village, the grand Chateau Tongariro sat elevated on the horizon. We ventured into the warmth to enjoy dinner in the iconic Ruapehu Restaurant alongside hotel guests and other holidaymakers, and later retreated to our campervan where a game of cards kept us entertained until bedtime. Ah, the simple life!

One of the joys of staying in a campervan is the no-fuss nature of leaving for your next destination. There is no last-minute suitcase packing or rushing to check out of a room on time; you simply unplug the power and start driving.

On day two it was the 60km journey south to Ohakune. A hairpin bend revealed a stomach-dropping gorge bridged by the impressive Mākatote Viaduct, the last and highest structure built on the North Island Main Trunk Line. Upon construction in the early 1900s, the viaduct provided a vital link in the railway, contributing significantly to the country’s economy with the improved efficiency. 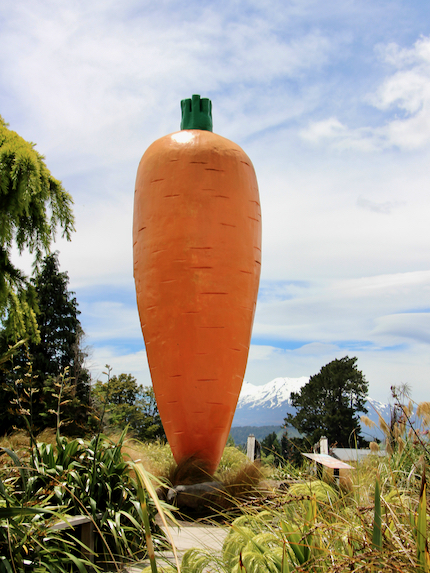 Paddocks rich in carrots and potatoes lead us to Ohakune, the little town largely known for its market gardens. The giant carrot on the main street is a magnet for photographers and the story behind it is significant, too.

Several Chinese families created the first market gardens here in the 1900s, with the Auckland to Wellington rail link providing critical access to city markets. The hardier vegetables – carrots, potatoes, parsnips, swedes, cabbage and cauliflower – proved to be most successful in the cold climate.

There’s a sense of entrepreneurship in Ohakune. It’s evident in the way the owner of Thorn café. busied herself baking muffins as we ate breakfast in her very cute establishment. And it was apparent inside Opus Fresh Apparel Co, a clothing company and coffee shop tucked inside the Ohakune Railway Station. Multi-talented Janelle Hinch sews garments in the workshop at the back of the store and shifts into barista mode when guests arrive.

As she made our coffees she spoke about how the village, which surges with avid skiers and snowboarders in winter, is becoming a permanent base for many. The population growth was heartening, she said, as steady numbers meant restaurants could stay open year-round and schools had enough children to form sports teams.

A pair of colourful rosellas flitted alongside the rhododendron-lined SH49 east toward Waiouru, through Tangiwai, which translates to ‘weeping waters.’ The air felt thick and still with sadness as we paused to remember the 151 passengers who lost their lives in New Zealand’s worst railway disaster on Christmas Eve, 1953. 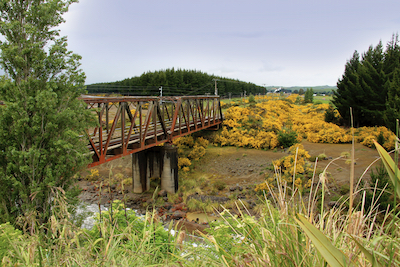 The locomotive and first six carriages of the Wellington-Auckland night express plunged into the flooded Whangaehu River after a volcanic lahar ruptured from the Mount Ruapehu Crater Lake. While the bridge has been rebuilt higher and sturdier, it’s a sobering reminder of how powerful nature’s force is, particularly in an area where the mountain tops still steam.

The campervan took each bend north along Desert Road with ease and stability; its large windows gave the opportunity to marvel at the mountains from a different perspective.

Snow sat in clumps and shards between the steep valleys. One piece on the side of Mount Tongariro looked like the shape of the African continent, cut from white paper and stuck on with glue. Ever-changing scenes tried to steal our attention, from dry, tussock-covered hills to sandy plains and rocky boulders. Roadside signage warned of live firing from the designated army training areas close by.

Fly-fishers cast lines in a rocky stream in Tūrangi, the sport’s capital, while we continued north-west to where fire meets water in Tokaanu. Complete with thermal pools and a short walk through mānuka bush and hissing pools of geothermal water, it was a welcome pause before journeying back home along SH1. Edging the shore of Lake Taupō, I turned back to catch one last glimpse of the mountains that had become so familiar during our time in the national park.

Reported by Monica Tischler for our AA Directions Spring 2021 issue