The rain had settled in. It had dropped its bag in the hallway, put its feet on the coffee table and asked when dinner would be. Mist crept over the brows of hills, brooding and moody.

Not the most auspicious start to our road trip, but we cruise up the Brynderwyns regardless, stately and elevated in our campervan. I am pleased to be fulfilling a childhood dream of travelling like a snail – taking my home with me wherever I go.

That evening in Whangarei, the holiday park at the foot of Mt Parihaka is shrouded in sheets of rain. We squeeze past each other again and again in the dance of the small kitchen, while outside in the dusk children wrapped in blankets splash barefoot through puddles.

What to do on a rainy morning? We discover the Whangarei Native Bird Recovery centre. Robert and Robyn Webb founded the refuge in 1992 after years of caring for injured birds in their home. “Sometimes we’d have 80 birds there,” Robert laughs. They care for all birds, native or not, and where possible rehabilitate and release them back into the wild.

On an enclosed veranda of the centre, a volunteer shows a male pukeko, only a few weeks old. How carefully he plants his oversized, spindly feet as he squawks and pecks his way around the deck; how readily he flattens his tiny body in bliss, as I scratch his downy black neck, only just starting to turn that rich, royal blue. I’m utterly, gigglingly charmed.

Whangarei also boasts the best transformation of a landscape scar since the Blue Lake at St Bathans. The Quarry Arts centre is probably no Council’s favourite development, with its ramshackle spirit and draughty buildings, but it’s a gem of a place. The legacy of the late Yvonne Rust QSM, talented potter and teacher, the centre sprawls in a decommissioned quarry; machinery remnants still peek out from bush clinging to the cliffs. Below, mostly wooden buildings house artists’ studios, the Yvonne Rust Gallery, a craft co-op and art groups’ clubrooms.

The people enrich the place. An ex-commercial fisherman who makes three-string guitars from cigar boxes in the tradition of African-American slaves in the 1800s; the ex-teacher who took up woodturning because he wanted to do something “besides golfing and fishing”.

Helen Hughes is an ebullient sculptor who first came to The Quarry from Tauranga for a summer course in 1992. “It was 10 days camping here, full immersion,” she fondly recalls. She moved to Whangarei in 1997 and has been involved with the centre ever since.

Heading north and then west on SH12, accompanied by the rattle of cutlery and crash of pots whenever we round a corner, it’s time to stretch our legs. The Pou Herenga Tai Twin Coast Cycle Trail, still under construction, is 84km long and links the coastal towns of Horeke in the west and Opua in the east. We trial the 14km stretch between Kaikohe and Okaihau. Our tyres scrunch as we pass several carved pou (poles) marking the beginning of the track and follow it past gorse, thistle and newly planted natives.

We ride through avenues of green, rolling farmland and past a sculptural procession of tree trunks, having mock races, talking endlessly about life and greeting others on the track. I find cycling through a rail tunnel delightfully disorienting with the curve, the loss of light, the echo. A hawk flies overhead as we near Lake Omapere; cycling back, the rain is horizontal. 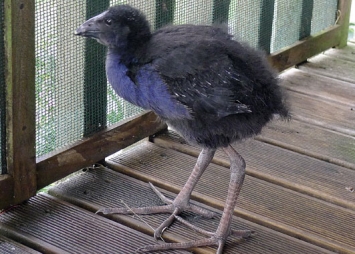 Afterwards, a soak at Ngawha Springs is blissful. We head straight for The Doctor, a black-as-ash pool of bracing heat, and stay until we are prune-like. A local guy advises me to finish off in the Bulldog pool, as its waters will clean off most of the signature mineral smell. He warns it’s the hottest, and I only get up to my calves before uttering several unprintable words and backing out. But I persist and it is worth it.

We barely stay awake through dinner on the deck of the Opononi Hotel that night. Rugby’s on the TV inside; I’m captivated by the vivid sand dunes and brooding clouds.

Parking a camper overnight on beaches or Council reserves isn’t allowed in Northland, and only at basic campsites if the camper is fully self-contained with a waste-storage tank. Although our van is self-contained, we’re already sold on Kauri Coast Top 10 Holiday Park north of Dargaville, as it’s set in the bush with a river and an open-air kitchen.

We also have spying kiwi on our wish list and the holiday park runs a guided night walk through Trounson Kauri Park, a 450-hectare ‘mainland island’, where predators are controlled to protect the native flora and fauna. On the tour we see kauri of all sizes, an eel eating cheese, glow-worms, kauri snails and giant weta (and I mean giant).

Happily, luck is on our side. A kiwi male forages, so intent on eating that he either doesn’t notice or doesn’t care that 20 people are breathlessly following his every move. With a peculiar rolling waddle, he climbs over branches and around bushes, plunging his beak deep into layers of leaves to dig out wriggling pieces of dinner.

I want to say: “Hey kiwi, do you know how many homesick travellers think of you? Do you even know you’re a symbol of our small, precious country?” The symbol snuffles along, not giving two grubs about it. And I grin, delighted to see an icon made flesh and my first kiwi in the wild.