Jo Percival loops around the Southern Scenic Route from The Catlins Coast to Te Anau and back to Invercargill.

It begins, like history does, with wilderness. Forest, alive with fluttering songbirds. Waterfalls carving their way through rock. Coastlines sandblasted and weather beaten. It is wild here in The Catlins. 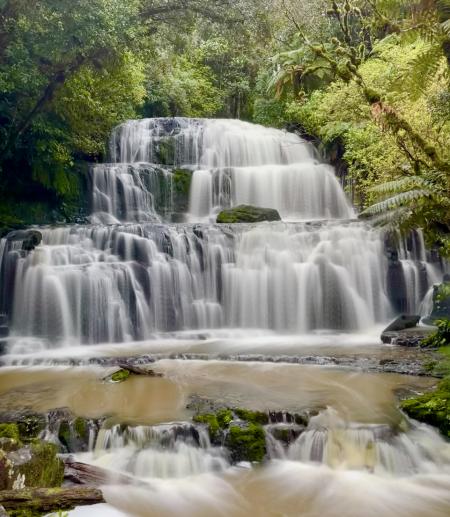 Pūrakaunui Falls in The Catlins. Photo by Jo Percival

Overnight it rained heavily, creating perfect conditions for admiring the region’s most famous waterfalls: Pūrakaunui, triple-tiered and glamorous, and the 22 metre-high Mclean Falls, tumbling down a vertiginous mossy gully. But as well as waterfalls there are beaches – wild, windswept, literally breathtaking beaches. I pause at Florence Hill lookout to take in the sweep of coastline at Tautuku Bay, buffeted by the breeze. Further south at Curio Bay I keep an eye on the waves to spot any resident Hector’s dolphins, but it’s only swirling clumps of kelp in the froth today. At Waipapā Point I shelter behind one of the last wooden lighthouses built in New Zealand. It’s too windy to stand upright otherwise.

The next day, at Nugget Point, I visit another famous lighthouse. While the clifftop pathway is sheltered from the southerly wind, the vegetation bears the legacy of many storms. Trees, groomed by gales, form tunnels over the path, clinging tenaciously to the rocky cliff. From the viewing platform I look down on seal pups playing in a mermaid pool on one of the rocky islets. Kelp surges, slick and oily-looking in a narrow chasm. Waves crash into white foam over the craggy, inhospitable rocks with thunderous booms. Gulls wheel and lament, while the stoic white lighthouse stands guard above it all.

Split across the Mataura River, Gore Maruawai is a pretty town that does not live up to its parochial reputation. Gore is home to fresh street art, the classic, Instagrammable Creamoata building and one of the best provincial art galleries in New Zealand.

The Eastern Southland Gallery is housed in a curvaceous brick building that was once the public library, now expanded to fit the gallery’s seriously impressive collections. Inside, ornate ceilings are painted deep charcoal to offset the clean white walls showcasing the works from some of New Zealand’s most renowned artists: Ralph Hotere, Rita Angus and Theo Schoon are all featured here. 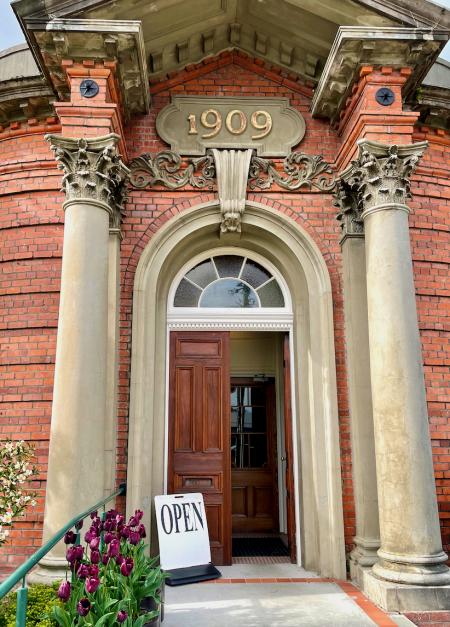 On a sunny evening, the Gore Public Gardens are a treat. I stroll amongst manicured beds of roses, camellia bushes and rhododendrons and find a well-populated aviary with exotic birds clearly accustomed to human interaction. A bright green parakeet flutters down to a perch at eye level and wolf whistles just centimetres from my nose.

Heading out of town the next day, I stop in at Mandeville, where a grassy airstrip in the middle of the countryside has evolved into an extensive collection of aircraft with an on-site restoration workshop. At the Croydon Aviation Heritage Centre the majority of planes on display are De Havillands, with cheerful yellow Tiger Moths and an impressive blue Dragonfly sitting alongside a bright orange Fox Moth that was once a passenger plane on the West Coast. Meticulously maintained by the local community trust, the best part about the collection is that the majority of the aircraft are still in service, often participating in classic air shows or taking scenic flights from the neighbouring paddock.

Despite Fiordland’s reputation for being one of the wettest places in New Zealand, I arrive in Te Anau on a cloudless, windless afternoon. The lake gleams in the sunshine, lapping gently at the stony beach. I slip off my shoes and sit with my feet in the cool water. It is the definition of tranquility, still but for the occasional slosh of a boat’s wake and tūī song.

The best way to appreciate a waterside location is to get onto the water. I board the Faith in Fiordland for an indulgent evening cruise, exploring Lake Te Anau with wine and canapés. A 1935 motor yacht, Faith was originally built in Scotland and hosted esteemed passengers including Winston Churchill, before eventually making her way to New Zealand in the 1980s. Her heritage has been restored and preserved, with glossy oak paneling, red velvet squabs and weathered wooden decking. We set off from the jetty into the low evening sunshine, golden and glinting on the ripples worked  up by an afternoon breeze.

Lake Te Anau is the second largest lake in New Zealand; the largest in the South Island, stretching for more than 60km, with 30km-long fiords branching off the main lake. Marie, the boat’s captain, tells me that South Fiord is quite similar to the famous Sounds on the other side of Fiordland, though with fresh water rather than ocean. And, of course, no dolphins.

I finish my day aboard a train bound for nowhere. One of the quirkier accommodation options at Te Anau Lodge is the Fiordland Carriage – a repurposed train carriage from Dunedin’s Taieri Railway nestled at the bottom of the garden. Refitted to include a comfortable bed, a bathroom midway down the carriage and a traditional train seating area, it’s unconventional and utterly charming.

Driving south in the morning, the snow-topped mountains twinkle, backlit against blue in my rearview mirror. Ridgelines taper to the coast where more shades of blue merge on a hazy horizon. The wild stretch of Foveaux Strait is masquerading as a lake on a windless afternoon, calm, flat and deceptively tranquil. 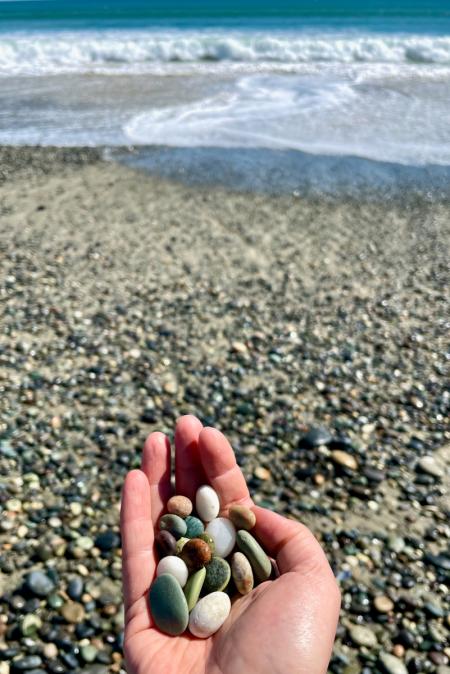 On the southern coast, Gemstone Beach is a fossicker’s dream and a parent-of-toddlers’ nightmare: a beach that looks like it’s made of colourful jelly beans. Ocean-smoothed stones are washed and glossy from the waves. Semi precious stones are often found here, too, from quartz to garnet and even sometimes gold. I leave with a pocket of colourful surf-tumbled pebbles.

Riverton Aparima is having a lie-in on Saturday morning, snuggled under a blanket of soft grey fog. A small coastal village, tucked between Taramea Bay and the Pourakino River, Riverton has a strong creative pulse. With its back to the river, the main street is lined with pre-war heritage buildings, many painted in vibrant murals and housing independent galleries, antique shops, crafts, and quirky knick-knacks.

From Riverton, I head into Southland’s Big Smoke. Invercargill Waihōpai is famous for its Scottish heritage and wide streets, named for rivers in the British Isles, including Dee and Tay, as well as the Forth, Tyne, Thames and Spey.

By far the largest tourist attraction here is Bill Richardson Transport World, founded by a classic car aficionado. It is vast to the point of overwhelming – sprawling over 15,000 square metres; an entire city block – winding through a series of linked, cavernous warehouses. Inside, under the museum lights, the vehicle collection is immaculate. Bright, beautiful bonnets sparkle, regularly and lovingly dusted by a team of volunteer retirees. Alongside cars and trucks, there are also classic tractors, a fascinating wearable arts display, more than 250 beautifully restored historic petrol pumps, a vintage tea towel collection, classic children’s pedal cars, die-cast toy cars and a chronological collection of jukeboxes dating from 1935 until the 1980s.

It’s a short drive from Invercargill to Bluff Matapōhue, where the iconic signpost at Stirling Point seems a fitting spot to finish my journey, closing the Southern Scenic Loop. Wisps of sea fog hang around on a windless afternoon as I wander along Foveaux Track, an easy stroll through hardy coastal trees thick with tūī and korimako, surf fizzing placidly below, benign in the sunshine.