Kathryn Webster indulges in the flavours, scents and sights of Vietnam.

At the edge of a tributary, a brick-works is busy with the production of small clay oblongs made from the mud of rice fields. A muscular young man shovels mud into a machine that churns and forms and delivers a sinewy snake of clay; a strong woman cuts evenly, expertly, and stacks. Other family members carry the new bricks into sunshine to dry for a week before they’re set in hive-like kilns to cook for three weeks. Rice husks are used for the firing and, having become ash with cooking, sold back to rice farmers as fertiliser. 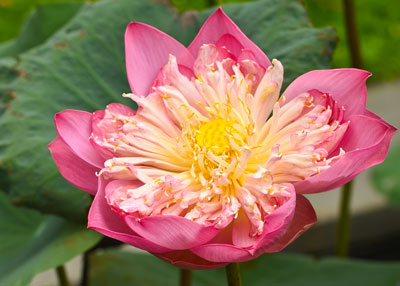 The Delta is famously fertile. Three crops of rice can be grown each year; elsewhere it’s typically one. Fish farming is big business and exportable agricultural produce thrives in the stable climate, in soil rich from silt from the long Mekong which starts its journey to the ocean in Tibet. Through China, Laos, Myanmar, Thailand and Cambodia the river runs, carrying good fortune to the nine branches at its Vietnamese end. Local people are said to be the most relaxed in the country, as they don’t have to worry about tomorrow.

But it’s not taken for granted. Nothing goes to waste. Like the brick operation, a coconut factory we visit is a model of super efficiency. Women, many with their children playing nearby, sort a huge pile of coconuts into shell for charcoal, husks for mats, white meat for toasting and milk for caramelising on-site, where sweets, soaps, oils, jewellery and trinkets are also made. Scraps go to the chickens.

With something like 1,000 kms of canals around the delta, business is done by water and it’s also the best way to see the area. We board long, flat boats and float past intriguing domestic scenes – houses with lush, colourful gardens and rickety wharves poking into the waterways – then step off to walk leafy rural roads fringed with palms and water gardens. Nosy, we stop at a mat workshop and watch women weaving wedge, one on the loom opening the warp, another sliding the weft through.

Tourists on bikes stop to ask directions to the brickworks but actually, it’s impossible to describe. A guided tour is pretty much essential here. It reveals a lot more than could be found by someone new to the place and without the language, not to mention the logistics of hiring boats and tuk-tuks, and knowing which paths to walk down.

Our guide takes us to an orchard to taste spotty-fleshed dragonfruit, rambutan and jackfruit. We sit in the courtyard of the hosts’ home and peek through an open door at their life. A child sleeps on a wooden platform in the cool; an antique table displays family photos and certificates under glass. Sips of jasmine tea revive us.

And then to lunch in the middle of a garden in a tiny, hidden village: fish wrapped with salad in rice paper, prawns with salty dips, fried sticky rice cake delivered as a giant, glorious puffball that is deflated on arrival with a sharp stab. Tamarind, fish sauce, coconut juice, lemon grass: such evocative scents are also loaded into my memory bank.

Having gained so much from a guided tour of the Mekong Delta, we decided on a guided tour of Ho Chi Minh City (or Saigon), too. A Street Eats tour of the city at night revealed a menu we would never have experienced without help: famously good baguettes, clams in broth, grilled oysters with peanuts on fried rice, rice paper grills with egg, cheese and squid for the equivalent of about NZ$1. This was served at a pop-up restaurant on a footpath outside Saigon Ford. Staff took orders, stuffed notes into pockets, cut the food at plastic tables with scissors. Quick, quick, next please. Next stop, grilled octopus with salty sauces, banana fried with coconut. Buzzy, busy street scenes in the deep heart of the city, which we could never have discovered without a local. 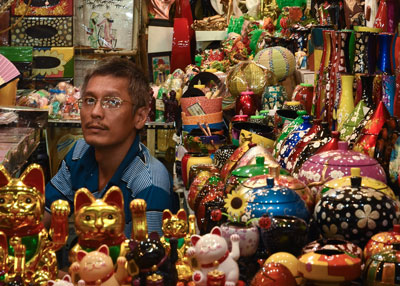 The next day, the same guide showed us around his town, past City Hall, past Notre-Dame Cathedral to the post office to meet an 86-year-old public writer who looks after correspondence for those who struggle with words. We saw the CIA apartment made famous with the photo of people clambering from its roof into a helicopter when

Saigon fell in 1975. The photo was taken from Caravelle Hotel, a beautiful grand dame of a place, right in the centre of modern action, too.

We called into the public Fine Art Gallery, then walked down Antique Street (where some less-than-antiques are also sold) then to the massive, overwhelming Ben Thanh markets.

North of Ho Chi Minh by a short flight is Hoi An, a low-key coastal holiday spot recommended as an antidote to the busy-city experience. Hoi An is romantic, with its old stone harbour full of traditional lines and poetic shapes, its lanterns and lights, and its bright flame trees, frangipani and bougainvillaea shimmering in the heat.

It’s an early-start-to-the-day sort of place. We quickly found a rhythm of rising early, walking around the old town or venturing to the outskirts, before scuttling back to Almanity Resort for a swim in the pool. Later, once the heat had subsided, we’d go back into Hoi An’s centre and join the general throng.

Tourists know about Hoi An’s tailors and shoe makers; the old quarter is lined with their stores, but the samples of woollen coats and winter suits made me prickle, even from a distance.

I was drawn, moth-like, to the bright, silk lanterns, but there were too many colours, patterns, sizes, shapes to choose from. We wandered, back and forth and in-between, finally stopping to recharge with a strong, sweet coffee at a café that was once a family’s home. Up steep, narrow stairs we climbed, to the roof garden, to look down on the neighbourhood’s yin-yan slate-tiled roofs and down into narrow cobbled alleyways, busy with laden bicycles.

One morning, we boarded a boat to visit Thanh Ha pottery village, where family businesses spilled into courtyards, artists worked clay in the shade and elders manned stalls selling pots, bowls, vases, spoons, animal-shaped trinkets. At one workshop an ancient, bent-over woman showed tourists how to throw a pot, while her granddaughter kept the wheel turning with the kick of her foot.

One evening we were treated to dinner on a raft anchored at a corner of the river, with luminous green rice fields all around us. The sky was a riot of storm cloud, lit to look like a giant bruise by the sinking sun. Fish jumped, lamps sparkled prettily and we sat, in peace, a quiet breeze providing relief while we ate multiple courses of Vietnamese deliciousness.

We toasted our last night in this beautiful, exotic part of the world, collecting final memories to carry home.

Reported by Kathryn Webster for our AA Directions winter 2017 issue

The writer travelled courtesy of World Journeys  and Cathay Pacific.