The snowcats disappeared over the white horizon leaving me alone at the little Soho Basin day lodge. I’d just had 12 of the longest, most challenging powder runs of my life and my leg muscles were screaming out for a break.

I also wanted to experience the solitude of Soho once the bright red snowcats had trundled my fellow skiers and snowboarders out of sight and sound. They were experts craving steep and deep runs. I was happy with a more leisurely experience – a mix of skiing and luxuriating at the lodge tucked into a fold in the mountain.

Gazing up the mountain, I was mesmerised by the dazzling white wilderness sparkling like a million diamantés in the sunshine. The jagged rocks on a ridge above the lodge, too steep for snow to cling to, were stark black against the pure white. S-shaped tracks between the rocks were evidence of where a skier or snowboarder had cut a line down the chutes.

Soho Basin had always fascinated me. I had skied at Cardrona Alpine Resort on the other side of the mountain range since it opened in 1980. We had often peered down Soho’s pristine slopes, fantasising about what it would be like to plunge off the edge of the boundary track and disappear into the untracked powder. Being there, doing it was quite surreal.

The skiing that day was the stuff of dreams; 20 skiers and snowboarders with a guide and patroller spread out across vast, untouched terrain, each carving first tracks on their own piece of mountain paradise. No lift queues, no need to check peripheral vision for snowboarders on an unpredictable line, no hazards of trails merging, no freezing chairlift rides up the mountain.

There’s nothing to equal the euphoria of swishing down a virgin slope, silent except for the rhythmic whoosh of your skis floating through weightless snow. The heady sense of freedom is intoxicating. 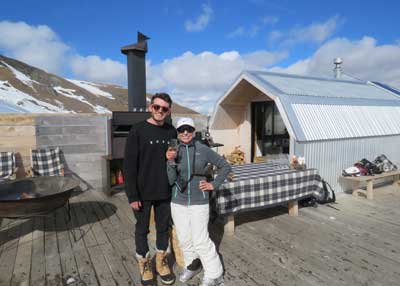 After each breath-taking, heart-pounding run, snowcat drivers Tony and Ross were waiting to transport us to another part of the mountain. With 264 hectares of skiable terrain, every run was different. The ride in the cosy, air-conditioned cabins attached to the back of powerful Pisten Bullies gave everyone time to rest, warm up and chat.

On one occasion, I rode upfront with Tony who loves his job so much he came back from retirement to drive cats at Soho... and to ski. I found myself transfixed by the motion of the plough on the front of the machine, rolling the snow into elongated cylindrical shapes that spilled over the sides of the track.

At midday, we skied down to the lodge where we were greeted by host Daniel, waiter Thomas, chef DJ and the unmistakable sound of champagne corks popping. An enticing array of Central Otago Amisfield wines sat chilling in a bucket of snow or breathing near the fire. Craft beer from Wellington’s Garage Project, Benjer juices from Cromwell and warming mulled wine ensured all tastes were catered for.

Lunch was an elegant five-course affair, served at a long table outside with starched white napkins, fine china and crystal, a far cry from the standard skiers’ lunch of pizza and chips on paper plates.

After lunch, the big cats ploughed their way up a steep track to the highest point on the mountain, 1936m Mt Cardrona. The panorama from the summit was mind-blowing – Wānaka, Hāwea, Queenstown, Arrowtown, Lake Hayes, the Remarkables, the Wakatipu Basin, and row-upon-row of spine-tingling Southern Alps. I puffed out my proud Kiwi chest among the mainly-overseas contingent and said expansively: “My land – my tūrangawaewae,” sweeping an outstretched arm in a wide arc. They seemed suitably impressed. I’m a Southerner so I felt I had the right to assert ownership of this land.

My legs were jelly after the long, deep powder run from the summit to the lodge. The next time, I took the groomed piste to give my muscles and lungs a breather. Yes, a perfectly- manicured groomed run in just the right place, at just the right time – they think of everything at Soho.

Later in the day, I indulged in ‘Soho s’mores’ by the lodge fire – toasted marshmallows dipped in hot chocolate sauce squished between layers of biscuit. Messy, but very good.

As the sun began to fall from the sky, the cats trundled 20 tired but elated guests back to Soho HQ for beers at sunset. Guide Mark and patroller Brenda, who had been looking after us all day, relaxed too.

Another epic season at Soho was drawing to a close and there are big changes on the horizon.

In July last year a partnership between Soho Basin and neighbouring Cardrona was announced which will create New Zealand’s largest alpine resort on the range between Wānaka and Queenstown. The signatories, Real Journeys Group, who own Cardrona Alpine Resort, and Queenstown businessman John Darby, who owns Soho Basin, have been working on a deal for years.

Access to Soho will be from the top of Cardrona’s McDougall Chondola, a mixture of chairlift seats and gondola cabins. A chairlift will be constructed on the Soho side linking with the Captain’s Basin chairlift at Cardrona.

Soho’s snowcats will continue to operate while the infrastructure is built to cope with the expected increase in the numbers of skiers and snowboarders to this world-class resort. Thereafter, the cats will move to another part of the mountain so the wilderness experience will still be available in the years ahead, providing a place to escape, make tracks in untouched powder and experience the solitude and silence of the mountains.

Reported by Justine Tyerman for our AA Directions Winter 2019 issue

A day pass at Soho Basin for 2019 season costs $785 including transport up the mountain in enclosed cabins attached to two 12-seater snowcats, and a gourmet lunch.

The terrain is suitable for advanced intermediate to expert skiers and snowboarders. The majority is ungroomed, off-piste powder of varying depth but groomed runs are also available.