The Marina at Havelock appears to be landlocked. Aside from the water the boats are floating on there are no sea views at all, with ridge lines folding around on each other to obscure the entrance to Pelorus Sound.

This curvy, crinkled bit of coastline is the start of the largest of the four semi-separate Marlborough Sounds. Pelorus, or Te Hoiere, is 42km long, with 380km of shoreline which, stretched out, is roughly the distance from Auckland to Mount Ruapehu. Aboard the Pelorus Mail Boat we’re going to explore most of it.

With no road access to the homes in the Sound, locals depend on the mail boat’s daily visits for supplies and socialising. Since 1922, the boat has carried freight, stock and fare-paying tourists who make it viable for the contractors who run the route.

As the boat chugs slowly out of the channel, warm sunshine is tempered by a breeze as crisp as a Marlborough Sauvignon Blanc. James, our captain is a loquacious local, peppering the trip with commentary laced with dry humour. 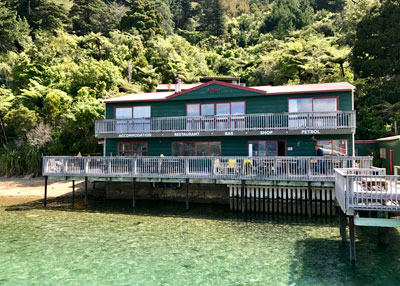 We pass steep bushy hills that drop to sandy beaches and sea-stained jetties at the water’s edge. Polished green water radiates from the boat in corrugated ripples. Shearwaters fly alongside, so low that their white wingspans are doubled in the glassy surface.

Ashore, houses and baches are studded intermittently through the bush, some close to the shore, others sitting at the peak of headlands like bowsprits.

The land here is preserved by isolation, being too remote and difficult to access to be really developed.

After Government farming subsidies were canned in the 1970s, only two or three farms remain in the Marlborough Sounds. Run-off is, understandably, a big issue. Many landowners turned to forestry instead, though that’s an eye-wateringly expensive exercise, as everything from machinery and trucks, to the logs has to be brought in and out via barge. Plus, since there’s no road access, bulldozers need to be brought in to clear the old logging tracks. We pass bare hillsides in the distance with forestry detritus like spilled toothpicks.

On the water, aside from a handful of industrious mussel barges puttering around the shoreline to tend their floating farms, there’s very little boat traffic in Pelorus Sound.

James stops the mail boat so we can watch a pod of Dusky dolphins, who seem equally intrigued by our presence. They roll over, flashing their pale bellies just below the surface to watch us watching.

One female has a tiny calf with her, not much bigger than a cat. James tells us that this is a nursery pod; the other three adults are staying close to protect the mother and baby. 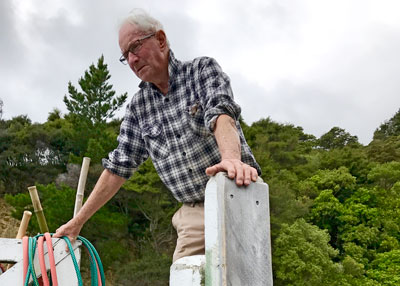 Today, there are a handful of deliveries to be made, with named mailbags piled at the front of the cabin. The boat noses up to faded jetties where locals chat to the crew as tourists flagrantly snap photos. The novelty and amusement works both ways at this junction of disparate lifestyles.

Bill Brownlee lives by himself at Te Puru, a small cove on the outskirts of the Sound. He is 93 years old. His cottage, set back from the sandy beach is immaculate; a wisp of smoke trails from the chimney on this cool day. Around the house, the well-groomed garden blooms with exotic plants – bamboo stands and banana palms. Bill strides down the jetty to meet the boat and collect his box of groceries. He hopes it will rain, he says, because his electricity is generated by a home-made waterwheel and the creek is starting to run low.

Here, jagged tentacles of land reach out into the Cook Strait. Craggy, honey-coloured cliffs meet small pockets of golden sand next to the water line, occasionally dotted with fur seals or
pairs of oyster catchers.

On Forsyth Island, dogs Ruby and Sid race down to meet the boat. They know the drill. Trish, the mail boat’s first mate, passes them each a dog biscuit along with the mail bag.

At Buckland’s Bay, Brian Brown lives with his border collie, Buddy. He’s owned the tiny cottage for 25 years but only lived in it full-time for one. He zips down to the beach on his six-wheeler ATV, Buddy sitting inside a coil of garden hose on the back. Along with his mail, Trish passes over a small, but hopefully lucrative avocado tree that Brian’s bought as part of his journey towards self-sufficiency.

Approaching another wharf, Trish reaches for the tub of dog biscuits. But there are no humans to meet us here. With a cry of “here pig pig pig!” a large black dog and two even larger, whiskery sows sprint down the hill to greet us.

With today’s tide their drooling, grunting faces are right at eye-level.
At Wilson Bay, Te Rawa is a waterfront accommodation with a licensed bar and café. “We’ll stop here for a bit,” says James. “I’ll think of a number to let you know when to be back at the boat.”

But no one wanders far – it’s much too pleasant sipping a glass of wine or licking an ice cream on the sunny jetty. Underneath, the water is infused with jellyfish undulating lazily above round, smooth stones.

This is the sea of dreams and childhoods, so clear and green you can see metres down to the bottom.

As the afternoon wears on, everyone seems postprandially snoozy.

Sandwiches eaten, cookies crumbled. We disembark back in Havelock at the end of the day, relaxed and happy, soothed by the rhythm of the sea and the gentle pace of Sounds life.

Reported by Jo Percival for our AA Directions Autumn 2019 issue

Marlborough Sounds is a collection of sunken river valleys creating a coastline of sheltered inlets and sandy bays, with forested hills rising steeply from the sea. There are four distinct Sounds, Queen Charlotte, Kenepuru, Pelorus and Mahau. All are brilliant for boating, fishing, diving and wildlife viewing.

Take a hike for a day or longer on the beautiful Queen Charlotte Track, either guided or independently. Water taxis from Picton can deliver and pick up, and there is a range of accommodation options on the track.

Explore the Sounds from the road along Queen Charlotte
Drive. Travel further and visit D’Urville Island, accessible via Ōkiwi Bay and French Pass.

Take a closer look at the environment from a kayak, either
with a local guide or on your own in a rented sea kayak.

Various cruises are on offer in the area, includes one with seafood dining as a focus and others that specialise in wildlife watching, including the opportunity to swim with dolphins.