Monica Tischler is captured by the stories of the stunning south.

Māori legend tells of how a giant formed the deep hollow of Lake Wakatipu. The South Island’s s-shaped lake, which resembles the outline of a sleeping giant, is flanked by The Remarkables mountain range on one side and picturesque Queenstown on the other.

Myth has it that a local Māori chief forbade his daughter to marry the man she loved. One night, she was kidnapped by a giant named Matau. The chief was distraught; he promised his daughter’s hand in marriage to whoever could rescue her. And who snuck away into the giant’s lair? None other than the daughter’s forbidden lover. Once he had completed the rescue, he wanted to ensure the giant never threatened his wahine again. Traversing the mountain ranges, he found the giant curled up asleep on his side and set fire to him. The flames burned him where he lay, scorching the earth.

Snow on the nearby mountains began to melt, filling the vast gouge and forming Lake Wakatipu, which translates to “Hollow of the Giant.”

Our guide, Steffan, shares the story as we edge along the Glenorchy-Queenstown Road, en route to the foothills of Mount Aspiring National Park where we’ll walk the famous Routeburn Track Day Walk, a portion of one of New Zealand’s Great Walks. The area is experiencing unusual cold spells for mid-October; snow had fallen days earlier. Pulling on my beanie and gloves, I inhale cool mountain air that bites my nostrils and the back of my throat. What a welcome reprieve it is to be here.

A swing bridge near the beginning of the track is a gateway into striking native bush; the bubbling current of the trail’s namesake, the river Route Burn, providing a soothing soundtrack to the 16km journey with Guided Walks New Zealand.

Outstanding natural beauty and unique flora and fauna have granted Mount Aspiring National Park UNESCO status. We’re surrounded by beech forest; Steffan points out how to differentiate between the species of trees. Red beech trees grow see-through leaves where dappled sunlight filters through, whereas the leaves are denser on silver beech, often found higher in the mountains. 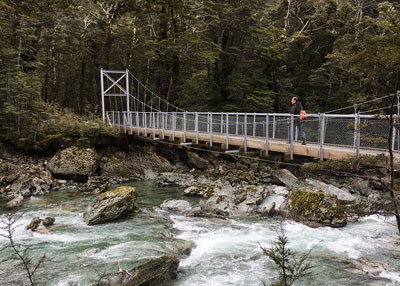 We learn about the phenomenon of the prickly fern. These plants only germinate when a male and female spur land in the same droplet of water on the forest floor. The spiky leaves of young lancewood trees are ancient survival mechanisms to protect against hungry moa. I’m grateful for knowledge that wouldn’t have been imparted if I were walking unguided.

“Look up!” Steffan says, pointing out a rifleman – New Zealand’s smallest bird – darting across a misty, overcast sky. “And see him over there; he’s a kākāriki, a native parakeet. His name literally means ‘green’ which makes him hard to spot among an all-green canopy.” It’s special to see these fleeting creatures, although it wouldn’t have been such a rare sight in pre-European times when birdsong was deafening. Efforts to eliminate rats, stoats, possums and other predators are being made by the Routeburn Dart Wildlife Trust and Air New Zealand, which injected funding into trapping in the area.

Woodlands part to reveal the grasslands of Routeburn Flats, an area surrounded by cloud-scraping mountains – quintessential South Island scenery. The Routeburn Flats Hut provides welcome shelter and a spot to refuel. Devouring a picnic lunch, I watch Department of Conservation workers helicopter in maintenance supplies, while others in the group skip flat pebbles in a nearby braided river.

After lunch, we turn and enjoy the valley in reverse. Ancient ferns, mosses and lichens guide us along the pathways of our ancestors; Māori once travelled these old greenstone trails. At Forge Flat, where horses were once brought to be re-shod before long expeditions, I take in the sights of strikingly jagged mountains cloaked in late-afternoon fog.

We pass Lake Wakatipu once more; this time it’s masked in a soft pink glow from the setting sun. “Look closely,” Steffan says. “Can you see the ripples on the water’s surface?” We all squint at the lake. “That’s Matau the giant’s eternal heartbeat.”

Stop off at Mrs Woolly’s General Store in Glenorchy for healthy takeaways, scrumptious organic groceries perfect for picnics, artisan gifts and more. Store profits go to a community trust to improve the lives of neighbourhoods in this quaint town nestled in the heart of the mountains.

Relax and indulge in Queenstown after the day’s walk. The charming Reading Cinema offers a reprieve from the township’s hustle and bustle. Soothe sore muscles with a massage or soak at Onsen Hotpools overlooking alpine scenery and the Shotover River canyon.