Spectacular treasures at World of WearableArt

We were admiring the garments at the National World of WearableArt Museum and Nelson Classic Car Collection, featuring over 60 items from the latest round of this world-renowned competition.

This particular entrant, entitled ‘Mind the Synaptic Gap,’ had been created by Grace DuVal from the USA using a combination of bicycle inner tubes, foam and vinyl. I wouldn’t have put it past Jasmine to turn up in such an adventurous outfit – such is her joie de vivre – but, she joked, perhaps something simpler might be more appropriate.

The drama and glamour of the show that was Dame Suzie Moncrieff’s vision may have moved to Wellington, but the sparkle and glitz lives on in its city of origin, Nelson, thanks to the museum – an icon that draws thousands of visitors each year. It’s just over 30 years since the concept of the competition came about – the first World of WearableArt Awards Show held as a promotional tool for a small co-operative art gallery in Wakefield.

Little did Dame Suzie Moncrieff know the design competition she founded would grow into an event that attracts entries from innovative designers across the globe. The highly theatrical and expertly choreographed show has a three-week season in Wellington that entertains over 60,000 people, and an international touring exhibition. But year-round at the museum it’s possible to marvel up close at the craftsmanship and creativity that goes into the intricate and imaginative garments that make it through to the finals.

A trip through its galleries cannot fail to give visitors a whole new regard for the contents of their recycling bins, kitchen drawers and garage cupboards. Who would have thought anyone could be so creative with recycled electrical wire, garden ties and coffee packaging?

Twice-annually the World of WearableArt exhibits are refreshed, with new garments swapped in, and new plaques mounted explaining the materials used and the inspiration behind them. And each year a new sparkle is created, with gallery walls repainted, fresh carpets laid and dazzling new lighting installed. Photos of the finalists themselves now also feature.

The resulting exhibition, with garments displayed to reflect each of the competition’s sections, is irresistibly appealing to all ages. Entering the world of WOW is like losing yourself to another experimental dimension – where strange ‘creatures’ abound and abundant creativity is given wings to fly. 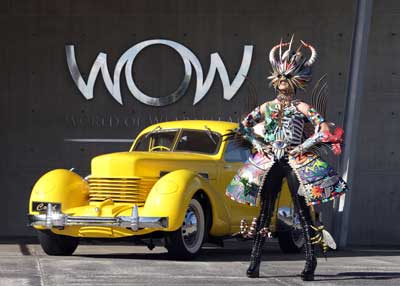 The rousing music from the show permeates the galleries, and in places videos give an insight not just into the movement of the garments sported by models, but also the atmosphere of the theatrical performance itself. Fun and frivolous mingle with thought-provoking – in particular the most recent Supreme WOW Award Winner and Aotearoa Section Winner WAR sTOrY by sisters Natasha English and Tatyanna Meharry of Christchurch, which was inspired by the 100th anniversary of WWI.

Commemorating the 128,215 New Zealand men and women who served, of whom 18,058 never returned, the garment combines toy soldiers with recycled materials. The plaque reads: ‘The statistics and experiences of this war irrevocably changed the body and soul of New Zealand as an emerging country. A heavy weight imbued with memories and stories, passed down to pave new futures for our mokopuna to carry.’

Hide and Seek, winner of the First-Time Entrant award and created by Mingzhang Sun, caught my son Charlie’s eye due to its stunning colour and intricacy – and also because it looked like confectionery! Incorporating around 50,000 buttons, all of which the creator had hand pressed, I wondered how on earth it had been transported from the UK in such fine fettle. And just when we thought we’d exhausted the collection of garments, including the aptly named Bizarre Bras, there were more to be found among the glinting chrome and polished panels of the Classic Car Collection housed inside the vast hall alongside.

We’d been transported from fanciful wearable artworks to those of a more practical kind – gleaming vehicles dating back to 1908, and a surprising number impressively displaying current vehicle licences.

The private collection of 140 treasures includes some of the most sought-after models of classic motoring. One of the oldest, a cream 1908 Renault with brass lamps and hand crankshaft, may be a veteran but its mint condition and gleaming engine defy its age.

The faultless 1914 Model T Ford looks like it might just have rolled off the production line, and the shapely 1958 Messerschmitt and 1950 Studebaker Commander clearly hail from the age of rockets and the space race. The building in which these are housed was once part of the car assembly plant where thousands of Hondas, Triumphs and even some Jaguars were produced before the plant’s closure in 1998.

On display beneath the boards detailing the building’s history is a shiny 1980 Austin Princess, fabricated at this very site and still in original condition. In the neighbouring building, where more of the collection is housed, there’s also easy viewing of the workshop where the vehicles are maintained. Surprisingly spic and span, it gives an insight into the efforts that go into keeping the exhibits in tip-top condition. In this section a canary yellow 1966 Reliant Regal, with Trotters Independent Trading Co. signage, holds a prominent spot and, nearby, a Locomobile with white-wall tyres looks uncannily like the star of the children’s movie Chitty Chitty Bang Bang.

For Charlie and Jasmine choosing which car they’d like to drive most was a hard call – voting swung between the slinky red Mazda MX-5 and low-slung carbon fibre beast from the Toyota Racing Series, driven in New Zealand’s premier motor racing championships. I had my own personal favourite – a sleek cream 1937 BMW 328, a fine vehicle to arrive at a ball in, no matter what the attire.

Reported by Fiona Terry for our AA Directions Winter 20191 issue

On Instagram? Follow AA Traveller for a daily dose of New Zealand travel inspiration. Tag @aatraveller for a chance to be featured.