Out on the lagoon at night the stars were incredible.

We were on paddleboards, cleverly lit so that we could spy underwater, but we’d turned the lights out to float in the black. Above, the firmament blazed uninterrupted.

Suddenly, an almighty splash! But we were in a lagoon, safe from sea monsters, so the moment was funny, not scary. A fellow paddleboarder had fallen off; her shrieks quickly quietening as she registered how warm the water was. “Ah, lovely!” she called. “I meant to do that!”

Home for a few days was the elegant Nautilus Resort, an eco-conscious place with a lagoon-side restaurant, infinity pool and relaxed vibe. Our beachfront suite had its own plunge pool. The deck, two steps up from the sand, caught the breeze and provided photogenic views of a small island just off shore. I’ve never slept so well.

When I woke to the sound of rain my heart sank, but it wasn’t rain, it was a mild wind playing with palm fronds. Good joke.

To check whether this was indeed the best place to stay on the island, we took a tuk-tuk tour of other resorts, sampling cocktails as we went. Pina coladas at Little Polynesia, mojitos at the Crown Beach, where we stopped a while to bathe in the sunset colours and watch a wedding. In the beach bar at Manuia Beach Resort, a mango daquiri seemed the perfect tipple and at Wilson’s Bar at Castaway, if I remember correctly, a banana and coconut concoction served with skewers of barbecued tuna, scallops and prawns. Brilliant idea, the personalised taxi service!

Another evening we drove ourselves to the Waterline for a sunset meal at a table above the sand. The scene was almost cliché: the swaying palms, the seafood and coconut-laden meal, the rustic décor and warm welcome. As if it wasn’t special enough, our host identified a stool at the bar that David Bowie had sat upon, many times, when he stayed in The Cooks during a film shoot a few years ago. That impressed us.

Days were spent swimming, meandering, taking drives. We’d call in to LBV for good coffee and watch the endless procession of scooters circling the island. Having heard about accident statistics and noting the exclusion on our travel insurance, we opted not to join them.

Near the airport, we parked up at Black Rocks. Just beyond the reef, where the sea is deep, we saw black shapes shifting the waves and stared hard hoping whales would materialise. It was too early in the season, though; they’re there from around August to November.

We sat on the grass watching our bags being loaded onto the small plane that would take us to Aitutaki. The wind was up, the mountain was collecting cloudy wisps around its peaks. The sun was warm, like a New Zealand January.

The check-in at the Tamanu Beach Resort was sweet and warm, with one of the resort staff explaining the short hike required to get to our studio along the beach. She told us that at dinner that night there would be live music: “Actually, it’s just Uncle on keyboard and a mic’…”

We took bikes out, toward the main wharf and the centre of town but it was hard to tell where that centre was, exactly. Aitutaki is a low-key, low-rise, slow kind of place. There are no dogs on the island, a detail cyclists appreciate. That absence seemed also to contribute to the quiet – that, and the steady rain.

It rained, hard, and we got soaked to the skin, but it was warm, so it didn’t matter. 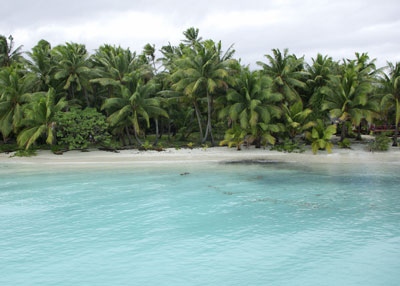 Back at the resort, we walked along the long, calm beach and stopped to watch a local throwing a small net out, pulling back bounties of tiny fish. Cats, plentiful I suppose because of the lack of dogs, helped themselves from the bucket.

As if to make up for the general peace, roosters woke us at dawn. We stood on the sheltered deck of our cute, thatch-roofed cottage contemplating a morning swim, but the sky was overcast, more rain threatening. We’d arranged to join a tour to the edge of the lagoon and cursed the rising wind; it would make the sea choppy and visibility poor.

Everyone we had met in the lead-up to this island time had talked about the brilliant snorkelling in Aitutaki. We’d met someone at the dinner the night before who’d seen a turtle!

It was a joy to be out in the middle of the ocean though, inside a coral ring, with its turquoise and silver colour scheme. The distant surf smashing against the reef made a thin, bright-white line, acting as a satisfying visual anchor in the abstract landscape.

On the little island that Bishop’s Cruises tour boat stopped at, the crew whipped up a lunch of multiple salads and barbecued tuna, everything made extra delicious with lashings of coconut.

The water was warm, but that was its only asset that day. We swam, sans mask and snorkel, then walked around the island – wading sometimes, stopping to watch heroic little crabs folding themselves into their shelters, quietly marvelling at being there.

The palms, busy in the wind, clapped and danced.

Reported by Kathryn Webster for our Summer 2016 issue

AA Members can save 10% on travel insurance.