Turning down an unmarked, gravel road off the Twin Coast Discovery Highway just shy of the Auckland-Northland border, there is no signage guiding guests to their destination until reaching the lodge itself.

Ascending the driveway and rounding a bend, we’re greeted by a family standing at the front door. Welcoming us is the Moores family, lodge owners Vince and Kathy and their children Nicola and Doug. 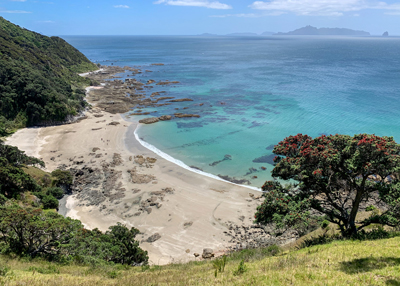 Bags are taken care of and we’re shown the lay of the land. From the balcony off the kitchen and lounge area is a sweeping view to the Brynderwyn Hills. A ribbon of cobalt blue wraps around the horizon, framing the jagged peaks of Whangārei Heads, golden sand dunes of Te Arai beach, Poor Knight Islands and 20 acres of ancient podocarp forest and native bush: our playground for the weekend.

The iridescent white sand coastline of Te Arai is a treasure. Accessible from another unassuming gravel road, it’s on the edge of a regional park where endangered New Zealand fairy tern and Northern New Zealand dotterel live.

Children splash in gentle waves fizzing on the shoreline; a lone yogi salutes the sun further along the coast. Experienced surfers carve along lengthy swells; learners sharpen their skills under the guidance of the local surf school, and a solitary silhouette reads a book overlooking a little keyhole cove.

The sleepy east coast settlement is set to be injected with new life and energy from the construction of multiple substantial houses across more than 550 acres in Te Arai Estate & Truffiere.

At the heart of the estate is New Zealand’s largest truffle plantation with more than 17 hectares growing périgord black truffles. Alongside the new development is the construction of two more golf courses by an American billionaire, in addition to the world-renowned 18-hole course – Tara Iti. In the meantime, I am grateful for the slower pace.

We drive to nearby ‘Magical Mangawhai’ where the weekend market is on. Laden with punnets of fresh berries and other produce, we make our way to the irresistible chocolatier, Bennetts of Mangawhai, tucked inside a European-style courtyard, to sample more of the local wares. 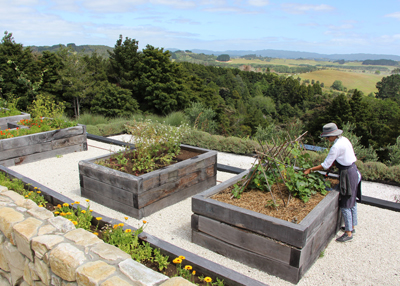 The tide is low, allowing access to the Mangawhai Coastal Walk track. Rated as one of DOC’s Top Ten Short Walks, the nine-kilometre trail delights with mesmerising vistas around every corner.

Turquoise cove after emerald bay leads to a pebbled beach complete with a hole-in-the-rock archway. We journey a short distance further north to The Cove – a charming eatery overlooking Waipū beach – to replenish energy levels.

Back at Te Arai Lodge, Nicola and Kathy are busy in the garden, picking produce for tonight’s menu. Sustainability and organic garden-to-table dining are principles the family holds dear; rather than using toxic chemicals, Vince spends hours each week weeding the grounds and gardens.

He tells us that upon settling on the piece of land and building the vision for the lodge, the family embarked on a pest eradication initiative, trapping possums, stoats and rats. The efforts paid off, with the regeneration of native birdlife; kōtare, kererū, tūī, ruru and kiwi now thrive in the region.

In fact, we’re woken in the depths of inky morning darkness to the shrill calls of a kiwi.
We get to know our hosts like friends and learn each family member plays an integral role at the lodge. At the helm is Vince – a chef by trade but an entrepreneur by nature, with a passion for projects, having built and designed a number of properties with the lodge being the crowning glory. Nicola has inherited her father’s culinary skills; the trained chef can often be found preparing meals for guests in the open plan kitchen. She’s working on a cookbook to showcase her creations.

Kathy’s vocation is instructing yoga, pilates and tai chi. Doug has followed in his mother’s footsteps, teaching yoga to guests in the studio overlooking the lodge’s swimming pool.
We devour nibbles and chat to other guests before breaking off into our own parties to dine at one of the many picturesque spots around the lodge. We choose to be nestled inside a glasshouse, with the sweet perfume of tomato vines.

When it’s time to go, the family bids us farewell in the same way they greeted us – wearing warm smiles and casting big, exuberant waves.