This year marks four decades since part of the Poor Knights Islands, 24km off Northland’s Tutukākā Coast, became New Zealand’s second marine reserve. The 1981 edict was expanded in 1998 to protect all the islands and surrounding ocean, 800m out to sea. The area has long been a mecca for divers; the late Jacques Cousteau, who knew a thing or two about the sea, rated it as one of his top-10 dive spots worldwide.

As part of exploring what’s sustainable, local and natural on the Tutukākā Coast, we sign up for Dive! Tutukaka’s Perfect Day trip. During the hour-long voyage out, we learn about the hapū, the way of life, for those who lived on the islands until a massacre in the 1820s. Today, the Poor Knights are managed by Ngātiwai and the Department of Conservation, and are the only nesting place of Buller’s shearwaters.

We nestle into one of Aorangi Island’s curves, parched cliffs of tan and grey looming overhead, pōhutukawa clinging to the sides. It’s time to play. As well as snorkelling gear, there are stand-up paddleboards, sit-on kayaks, and a large floating mat on which kids can lark about.

The water is remarkably clear. Over by a large arch, hundreds of fish swirl in underwater dances and feed off rock surfaces. Shimmers of silver and blue, yellow and black, a mass of energy. I lift my head above the water for a few seconds, and when I submerge my head again, roughly 100 fish have swum startlingly close to me. They’re in their element and unafraid. I’m amazed.

Sun filters through the water, illuminating floating specks suspended like dust motes in a ray of afternoon sun. We drift around, swimming in and out of small caves until we get cold. 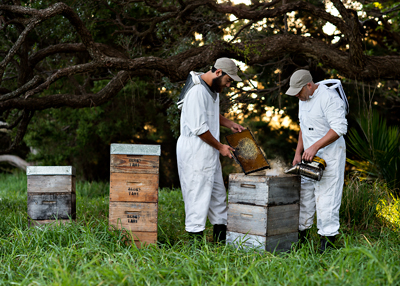 As we depart, the boat noses into Rikoriko (‘shimmering light’) Cave, the largest sea cave by volume in the world; during WWII, a Japanese submarine hid here for two weeks while undergoing repairs. The cave is also famous for its acoustics; Neil Finn, Herbs and Kiri te Kanawa have all sung here. Our treat is a rackety rendition of ‘The Wheels on the Bus’ from the kids on board as the sun hits the water and reflects a sparkling gold onto the walls.

Dive! Tutukaka also runs Lodge 9, boutique accommodation that mixes a relaxed vibe and beachy, tactile comfort. Huge piles and boardwalk planks from the old Tutukākā Marina feature in the outdoor BBQ and social area, as do the harbour’s original channel markers. We ate off gorgeous crockery by local potter Akke Tiemersma during the generous continental breakfast.

An eating-out option is Schnappa Rock Restaurant and Bar which takes pride in using local, sustainable kaimoana, ethical meat and, where possible, vegetables from their garden. The New Zealand negroni, featuring a Terra Sancta botanical aperitivo mixed with kawakawa, horopito, Campari and gin is a winner, too.

Over the hill in Ngunguru, Sup Bro offers a people-powered way to explore, with stand-up paddleboard tours from Ngunguru and Matapōuri to spots only accessible by water. After a quick lesson, we push off into the Ngunguru River. The advice about getting back on the board after falling off comes in handy within a few minutes, but the water is warm and my pride only slightly dented.

It’s calm, the only sound is the wind rippling across the water. A white-faced heron perches on a branch, impossibly elegant. We attempt to look half as poised while paddling, but fail.

Our guide directs us to Pī Manu, Ngunguru Sandspit Scenic Reserve, a finger of land sheltering Ngunguru town from the Pacific Ocean. Once the scene of a battle where Ngāpuhi and their coastal allies fought with Waikato tribes, the sandspit was threatened with development in more recent times but, after decades of work by advocates, in 2011 the Department of Conservation bought most of the sandspit.

Further south along Ngunguru Bay, at Pataua North, lies an enterprise proving it’s possible to successfully balance conservation, culture, community and commerce. Tahi is a 316ha restoration project, an award-winning honey producer, an accommodation provider, and a carbon-neutral example of how business can be.

Founder Suzan Craig bought the farm in 2004. So far, she and her team have planted 349,000 native trees and all the wetlands once drained for farming have been re-established. The number of bird species has quadrupled; native fish and repiles have returned.

All profits from honey sales and accommodation go back into conservation, culture and community. The most recent awards Tahi has won were at the 2020 Sustainable Business Awards, where it topped the Restoring Nature category and walked away with the supreme Transforming New Zealand prize. 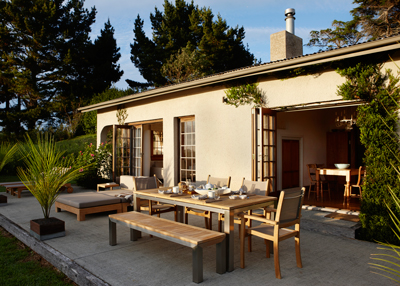 There are three walking tracks and on the annual open day (usually the Saturday before Easter), Easter Saturday and Easter Sunday, they’re open to the public. But if you’re staying at one of the cottages, the tracks are available year-round.

Hiwi is a 1930s roughcast two-bedroom cottage, done up in natural tones and textures to emerge as a contemporary bungalow that honours its heritage. Bifold doors and windows open to sea views and abundant birdsong. The compendium explains the myriad ways, large and small, that Tahi considers the environment, plus the many outdoor activities on offer.

And there’s Pataua North beach to visit, that golden stretch of gorgeousness where you can swim, lounge, or wander at the tide’s edge – leaving nothing but footprints that will soon be washed away.