Fiona Terry is treated to historic delights along the Otago Central Rail Trail.

Tiger Hill sounded like a beast; whether we’d be ready for its challenge was questionable.

Despite best intentions, we had managed only a couple of short training rides prior to the Otago Central Rail Trail – the country’s original Great Ride.

It sounded appealing but at 152km long, I hoped the scenery would be spectacular enough to keep our minds
off the work involved.

“Just click down a gear or two and you’ll be fine,” Steve Goodlass from Shebikeshebikes assures me after voicing my concerns about the hill. I was pleasantly surprised; the beauty of riding a trail originally designed for steam trains is that the gradient is never more than two per cent.

Fortunately, Steve’s bicycles, waiting for us at the quaint station building in Clyde, were far superior to ours back home; disc brakes, suspension, 24 gears, computers that monitor distance and speed, and generous panniers.

Steve had planned our itinerary to accommodate our ten-and 13-year old children, covering an average of 40km a day and allowing a rest day.

With our baggage left in the company’s safe hands (to be transferred between accommodations) along with the car keys (our vehicle would be waiting for us in Middlemarch) we set off;

This region was first discovered in the 1860s and is renowned for gold, but cycling from Clyde to Alexandra it became evident these days viticulture is vital to the economy. This is the most southerly commercial wine-producing region in the world, benefitting from a dry, sunny climate – ideal for grapes and fair-weather cyclists.

As we left Alexandra, heading along the Manuherikia Valley, a strong head wind whipped tall golden tussock into frenzied waves and bees clung for dear life to wild flowers. It made for thirsty work, but brought with it the sweet smell of thyme. The horseshoe shape of the trail meant the prevailing wind would work to our advantage later in our five-day adventure.

We passed paddocks with grazing horses and paused at huge viaducts built from local schist and basalt rocks, hand-hewn by stonemasons with mallets and chisels. The ‘dogs’ – giant nails pinning down the wooden beams – still bear the original strikes from the hardy folk who carved this railroad into the landscape through scorching summers and harsh winters.

The rail line, from Dunedin to Clyde, was completed in 1907 and joined to Cromwell 14 years later. It lost favour following the popularity of road transport and in 1990 the trains were shunted aside and rails dismantled. Its potential was recognised for leisure opportunities and in 1994 the Department of Conservation, in partnership with the Otago Central Rail Trail Trust, developed it, opening to the public in 2000.

Tunnels, viaducts and dramatic schist outcrops effectively took our minds off the legwork. The children took turns stamping our Rail Trail Passport at the stations and regular stops were warranted at the corrugated iron huts, once used by rail gangers for respite.

We were delighted to discover plenty of historic watering holes en route, though these days they’re just as adept at serving up gourmet dishes and lattes as the liquor sought by the gold prospectors. And for accommodation: there is plenty of choice for all budgets.

At Chatto Creek Tavern an oasis of red and white roses sheltered picnic benches, and alongside lay the remains of one of the earliest steam-powered dredges, employed recovering gold from the Manuherikia River between 1898 and 1909.

By the time we’d reached our destination – the characterful Old Post Office Bedpost in Omakau – with 37km under our belts and Tiger Hill having proved to be a kitten, we were happy to slip into the garden’s spa pool.

The next morning we climbed gently towards Lauder and the Ida Valley. 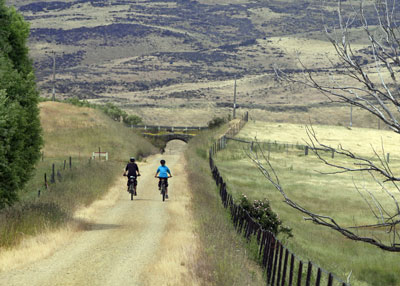 We stopped at Hayes Engineering with its homestead, museum and workshops filled with inventions, including the infamous fence strainer, and wished we had more time to explore.

Stone markers at every kilometre indicated how far we were from Wingatui near Dunedin, where work on the railway began in 1879, but no signs were as celebrated as that showing we’d reached the Rail Trail’s highest point, 618m, near Wedderburn.

With its extreme climate this can be the country’s driest, hottest or coldest place. Early Scottish settlers embraced freezing temperatures playing curling. Like bowls on ice, this is now enjoyed all year thanks to the impressive, international, competition-standard Indoor Curling Rink in the tiny heritage village of Naseby.

We left our bikes in Wedderburn to stay at Naseby Lodge and try our hand at the sport. Curling was trickier than it looked, but so much fun we’d have returned the next day. We had other plans though, involving transport of a different kind: a ride with a sled dog team.

At Real Dog Adventures, Rose and Nigel Voice were proud to introduce us to the largest kennel of Alaskan Malamutes in the Southern Hemisphere and the only three Canadian Eskimo dogs in New Zealand. They breed their cuddly four-legged friends and work them in harness, their noise and vigour in action defying their gentle natures.

The team of eight had no problem powering us through Naseby Forest, the children later revelling in the opportunity to help unharness the dogs and reward them with a drink.

The next day we pedalled out of Wedderburn, passing Ranfurly with its ornate station, heading for Kokonga. The area lived up to its reputation as ‘big sky country’ – the surrounding ranges giving rise to dramatic cloud formations that provided welcome reprieve from the sun’s heat. 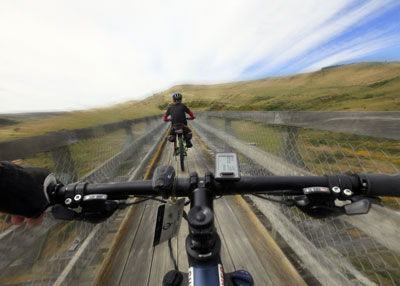 After the day’s 33-kilometre ride we were collected at Kokonga Station by Mark from the Waipiata Country Hotel, a tastefully refurbished mudbrick establishment dating back to 1899, where we enjoyed a hearty meal and chatted to locals.

An early night beckoned before we set off on our last morning through Daisybank, following the trail as it hugged the Taieri River through a dramatic gorge. Tall stands of willows veiled the water and shady riverside picnic spots looked tempting. Above, magnificent rocky outcrops and tussock-covered banks were speckled pink and blue with flowering sweet briar rose and vipers bugloss.

As the trail neared its end, the stunning schist of the Rock and Pillar Range towered above and the children’s legs only seemed to get stronger and faster.

We powered in to Middlemarch, celebrating our achievement and reluctantly swapping two wheels for four, vowing to return someday to re-ride the trail, allowing more time to explore.

In five days, we’d only skimmed the surface of what this part of the world has to offer, and despite our early reservations around how we’d fare, our experience had only left us keen to get back in the saddle.

Reported by Fiona Terry for our AA Directions Autumn 2017 issue

For details see:
otagocentralrailtrail.co.nz
For itinerary ideas and accommodation options go to:
aatraveller.co.nz.