Wisps of conversation slip between slow plops of rain.

There are five of us lounging in the Maruia Hot Springs rock pools: a German backpacker, a coaster from Greymouth, a North Island visitor, her South Island sister and me.

Like an open-air cathedral, talk is hushed as everyone is in awe of the raw beauty of the steep, heavily forested mountains surrounding us. We’re lying in pools hewn from rocks and filled with water piped from a fault that cracks the earth in the nearby riverbed.

Bellbirds are the soundtrack to our slow, toe-wrinkling soak as the sun dips towards the horizon chased by bands of gold, yellow and red clouds before disappearing in a purple wash.

It is only the threat of missing the last sitting in the restaurant that pulls us from the pools. It’s already dark and the air is freezing. The pools are open 24 hours though, so we head back there later after dinner and soak some more, as the light of a million stars tracks over us.

These hot pools were closed for a while but reopened about a year ago, and the new owners have given the once-faded facilities a makeover. The gardens still reflect the aesthetics of the former Japanese owners, but there is now a sauna and steam room, log fires have replaced gas heaters, and there’s a wide deck where you can sit and soak up the morning sunshine. The separate men’s and women’s indoor bathhouses have been combined, but privacy is still an option in several new spa buildings.

We eventually tire of soaking and head out to explore. There are at least 15 different walks around the Lewis Pass and Rahu Saddle area; our French-Canadian receptionist suggests the Lewis Tops track. It’s a three-hour round trip through beech forest that opens up at the top of the pass, with incredible views of the surrounding mountains.

Just ten minutes’ drive past Maruia Springs on the road to Springs Junction is the turnoff for Lake Daniells Track. We once brought a brood of children for a weekend walk in the forest and still giggle at their initiation into the joys of shared tramping accommodation in the Manson Nicholls Memorial Hut. The lake is shallow and the water warm enough for summer swimming. There are also some hapless trout for the committed fishermen, which the boys tried hard to be.

Leaving Maruia Springs, we head 45 minutes down SH7 to Hanmer Springs. While Maruia Springs, with zero cellphone coverage, is definitely a retreat from life’s insanity, Hanmer Springs is all about diving right in. The winding road over the historic, rickety Waiau Ferry Bridge and through quiet tree-lined roads with spectacular views of the Waiau River belies the intensity of the fast-growing town.

There is something to do, and someone doing something, everywhere we look. There is a queue to bungee jump off the Ferry Bridge, and on the Champagne Flat below the bridge people are clambering out of a jetboat, wobbly from the adrenaline-pumping ride. A couple of mountain bikers pass us, mud-splattered and grinning.

Once a staple of the landscape, the only horses left now are those of the Hanmer Horse Trekking crew. The trek through a river, past a waterfall and to the top of the hills was recommended to us, but when we phone to arrange it, we learn the first space, even though school holidays are over, is next week. 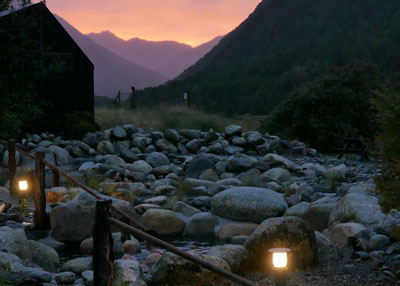 So we join the day-trippers who, with no place to be, amble through the forests that surround Hanmer. It’s beautiful now, but at the turn of last century the area was barren and windswept. The Department of Forestry decided to plant exotic forests and by 1903 more than 97,000 trees had been put in. As they weren't sure what would grow, they tried various species from around the world. Corsican and Austrian pines rub branches with oaks and silver birch, while Norway spruce and ponderosa pine provide the green in amongst the autumn golds and reds.

It is still light and too early for dinner, so we grab some putters and venture onto the Alpine Crazy Putt. Crazy may be too kind a word. The course has been rebuilt recently and the putting greens are imaginative, to say the least!

We catch the last of the fading sun with a glass of wine and a plate of tender crumbed calamari at Rustic Café and Tapas bar.

Just reading the brochures I’ve collected is exhausting. I’m exhorted to go bungee jumping, jet boating, clay bird shooting, quad biking, golfing, or even taking up archery. But the hot pools are still the highlight of any trip to Hanmer. And they’ve come a long way since they opened in 1894 as sedate bath houses for people to ‘take the waters’; today, the village has 11 spas. There’s an array of wonderfully indulgent treatments on offer, including warm oil massages, hot stone therapy and quantum healing touch. I opt for the Coffee Bean Exfoliation and emerge softened and languid.

Over a cup of tea, Rosemary Ensor, retired teacher and author of Hanmer’s 1983 centenary book, says even as more and more houses are built here, the town manages to stay magical. “It’s just special,” she says. A favourite story of Rosemary’s is of pioneer Bill Fowler who was born in the area in 1872. He lived all his life here and died aged 72 – literally in the saddle. His horse took him home. “Bill just never wanted to leave.”

I get it. After breathing in the fresh alpine air, languishing with a wine distilled from nearby vineyards, surrounded by views of snowy mountains and forests, and softened by the thermal pools, nobody wants to go home.

On the road
Hanmer Springs is 135km from Christchurch and Maruia Hot Springs is 78km from there.

The 450km Alpine Pacific Touring Route runs between Christchurch, Kaikoura and Hanmer Springs, through to Waipara Valley in North Canterbury. It’s promoted as a multi-day road trip to encourage visitors to put Kaikoura back on the itinerary.

Travellers should consider stopping for supplies in Waipara Valley for locally produced wine, cheese, olives and honey. All this and more can be bought at the famously good

Get swinging
Hanmer Springs Golf Club has some of North Canterbury's most spectacular views. It's open to visitors, green fee players and groups and is suitable for all ages and abilities.

Reported by Kim Triegaardt for our AA Directions Summer 2019 issue

Jackie Norman and her husband, Gareth, bought Ken in 2017. In a huge leap of faith...

There are many options of places to stay in Hanmer Springs. See aatraveller.co.nz for choices.