The great Southern Ocean is in one of its malevolent moods, lashing the coast with malice as if it resents this obstacle in its relentless march northwards.

In the distance a white lighthouse can just be seen through the mist of flying salt spray and shimmering sunlight on the sea. I walk the track to the lighthouse through a gentle drift of snowflakes and brace myself against the platform to absorb a breathtaking view.

Stretching out below me is a jutting spine of black reefs draped with giant bull kelp that writhes and swirls against the wave surge. Beyond the reef are a series of rock stacks, which look like rough-hewn gold nuggets.

100 years ago some unknown observer called this place Nugget Point. It has the distinction of having the oldest continuously used lighthouse in New Zealand and is the only place where fur seals, Hooker sea lions and southern elephant seals co-exist.

These beautiful animals are hidden by the flying spume on wave-lashed rocks far below but I glimpse the white flash of gannets and sooty shearwaters in the dark sky above.
Nugget Point is only a two-hour drive from Dunedin but I have a real sense that I’m far from civilisation in a desolate, windswept seascape that feels more Jurassic than just off the beaten track. It’s a truly magical place.

At the next bay I beachcomb along golden sand strewn with seaweed and the detritus of a violent storm. I set out on a coastal walk, past the sand dunes where human bones were discovered last century, but the sky darkens in a particularly ominous way and I’m forced to retreat from Cannibal Bay.

The jagged shoreline, boiling sea and mist of Purakaunui Bay epitomises the raw scenic appeal of the Catlins Coast. I can easily imagine that this was what New Zealand was like before humans arrived.

A short walk on a graded track under a high canopy of silver beech and podocarp trees brings me to the Purakaunui Falls. Normally a delicate, bridal-veil fall over three tiers of rock, today there are raging torrents with curious amber streaks of tannin tumbling down from the upper rim.

Further on, I come to the Florence Hill lookout, high above the spectacular sweeping Tautuku Bay. Then I reach one of the geological wonders of the world at Curio Bay – black petrified tree stumps litter the wave platform, interspersed with long fossilised trunks felled by an ancient volcanic eruption.

Had I been standing on this spot 180 million years ago I would be viewing a broad forested floodplain near the coast of the super-continent known as Gondwanaland, and the rest of the country would have been under the sea. There were no mammals or birds on the planet then, but I might have glimpsed a dinosaur and seen a tuatara or giant weta creeping through the undergrowth.

Porpoise Bay lies just around the point and I spot one of the 20 resident Hectors dolphins surfing the waves. Remarkably, these endangered creatures always remain in this bay. A roadside sign states: ‘Love us from a distance or lose us forever.’

Standing on the exposed beach at Slope Point I’m surprised at the absence of a dramatic headland such as the one at Cape Reinga, for this is the southernmost point of the South Island, halfway between the Equator and the South Pole.

At Waipapa Point, I sit in the golden tussock beneath the last timber lighthouse in the country and gaze at the tumultuous sea, conscious that there’s nothing between me and Antarctica. This stretch of coast is the ideal retreat for physical and mental refreshment – even in a storm.

My day on the windswept Catlins Coast is all the sweeter and much more enjoyable knowing that I will be staying the night in a cosy cottage called Karearea, after the New Zealand falcon. The place is like a falcon’s nest, high on a ridge in the mid-Catlins Valley called Mohua Park. There are farm and forest views without a sign of human habitation, and I sleep soundly in a self-catering eco-cottage and wake to the sweet trill of bellbirds and tui.

The cottage visitor book extols its virtues as a low impact tourism retreat and one entry reads: ‘this is a place where young men propose to their girlfriends – it’s that good.’ There are four cottages with grand views at Mohua Park, and the owners, Fergus and Mary Sutherland, who also run Catlins Wildlife Trackers, occupy the nearby ‘House on the Hill’. This fine residence was built as a sawmill manager’s house in the 1920s when 150 people lived in the local milling community.

Fergus likes to compare the Catlin’s climate and wildlife with the sub-Antarctic islands. “It’s rather like being on Campbell Island, 30 hours away by ship. We love the great variations in the weather. When we lived in Australia we always knew what the next day would bring. We used to say how nice it would be to wake up and have to decide what to wear.”

In the morning my hosts show me an eco-project on the picturesque estuary at Papatowai. The virgin podocarp forest contains magnificent totara, matai, rata and kahikatea trees and a host of delicate tree ferns.

Fergus’ mission is to save the endangered mohua or yellowhead bird. It became extinct in the Nelson region just five years ago, by natural attrition, but hangs on to life in the Catlin’s forest and isolated areas of Southland.

The couple wants the Catlins to become an eco-tourism destination. They live out their conservation principles in their everyday lives and Fergus has been honoured with the New Zealand Order of Merit for his work in the region.

It’s a beautiful corner of New Zealand – a living natural history museum where life is relatively unhurried and uncomplicated. Nature rules here, trees grow sideways and there’s a surprise for the visitor around every bend

Reported by Paul Rush for our AA Directions Autumn 2020 issue 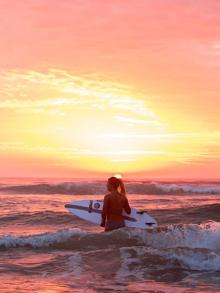 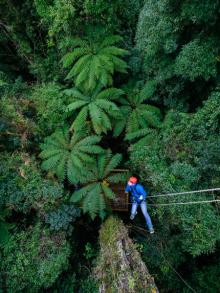