Time out at The Mount

Louise Jennings and family take a winter break in the Bay of Plenty.

Rising early and braving blustery rain to trudge along the base of Mauao, Mount Maunganui, I was surprised at the number of hardy individuals out and about. One of the hardiest appeared to have set up shop on a sandy patch of grass by the wooden boardwalk.

A drenched, enterprising lass of about eleven, blonde fringe beaded with water, presented her wares of worn white seashell rings and necklaces, atop a torn piece of soggy cardboard. It turns out she sells seashells by the seashore…even in winter storms. Okay, selling was perhaps overstating things as, aside from me, no-one else was stopping to snap up 50 cent rings.

I grinned at her as I slipped my new purchase over my finger and gave an encouraging thumbs up before walking on, raincoat hood pulled low. Within minutes of leaving her I came across a small bay glistening white under the shark grey sky. It appeared to be carpeted almost entirely with shells. Curious, I drew closer and saw that each shell was hollowed out, twisted and smoothed by ocean currents.

They all looked exactly like the one I’d just bought. Thankfully, this would remain a secret; the rest of the family were still warm in their beds. 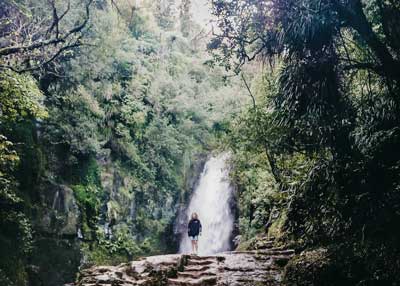 We were in Mount Maunganui for a week over the winter school holidays and while I was determined to make the most of every minute – and of all seaside bargains – the others were equally determined to sleep in. Staying in an apartment complex a block from the beach we had our own spa pool, along with shared tennis courts, bikes and an outdoor pool. There was also what I consider one of the very best things for a family getaway: no WiFi.

As the wild winter storm joined forces with a king tide to belt the coastline on the first day of our holiday, my children, aged 11 and 13, began a wonderful kind of technology thaw. With no computers, iPads or phones to occupy them, they became inventive out of necessity, somewhat friendly and ever-so-slightly wild. Which, frankly, is just how my husband and I like them. That afternoon a mad game of climbing out of the spa, running through the rain and jumping into the freezing cold pool ensued; thunder claps competing with high-pitched shrieking and laughter.

Slowing down, we began to appreciate aspects of winter that may previously have been bumped off the radar by Fortnite, YouTube or Instagram. We watched the world from a café as rain streamed down the windows and discussed the wisdom of the brave folk we’d seen wading through surging surf to reach Leisure (Moturiki) Island. We admired the skill of kite-surfers racing up and down the beach as we ambled along the dunes, bundled up in hats and scarves. There was a new appreciation of the spirit-lifting power of sunshine when, after the storm had moved on, we were able to climb a freshly washed Mauao to reach the summit at sunset.

While Mount Maunganui may be firmly fixed in visitors’ minds as a summer destination, it is just as wonderful in winter. After the rainclouds cleared we drove twenty minutes inland to the Kaiate Falls (also known as Te Rerekawau Falls) while the waterfalls there were at their glorious best. Even though it was the school holidays, the muddy path down was barely marked by foot or paw prints. We celebrated our waterfall appreciation and forest bathing excursion with curly fries, coffee and ginger beer from a café that looked
across a sea stirred with silt.

Beyond the pull to complete a 1000-piece Wasgij puzzle at the apartment and the simple pleasure of watching waves crash onto the beach, plenty of local fun activities were on offer for the children. We finished a day of indoor rock-climbing, beachcombing and visiting a skate park with steamed dumplings at The Rising Tide, a cute brewhouse that won favour with my boutique beer-loving husband. 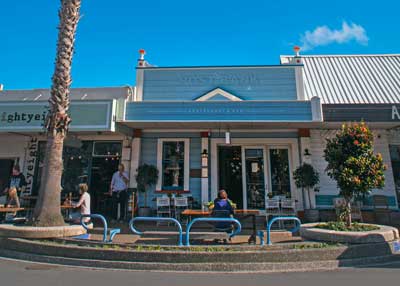 Mount Maunganui’s township and beachside shops contain all that anyone would need, from fabulous gelato to surfboard leg-ropes.
But don’t think I’ve forgotten one of the best-known attractions of the Mount; the iconic Mount Hot Pools. After looking forward to it for days, we visited the open-air heated seawater pools at dusk on our last night. Uncovering our bare limbs in the cold air we slipped gratefully into warmth. The mountain loomed above us, closing out the last light of the day, darkening the water and throwing long shadows. Through thin mists of steam, bathers sat with their eyes closed or moved slowly through the water as if mesmerised by the low murmurs of conversation. Some leaned their heads back to watch stars sprinkle across the black sky. Backed against the pool’s edge, I slowly circled my hands out in front of me as a sliver of light snagged my finger to illuminate a sun-bleached, worn ring of shell.

Reported by Louise Jennings for our AA Directions Winter 2019 issue

Climbing Mauao must be done, if at all possible. It’s well worth the effort for the stunning views and satisfying to look up at this iconic landmark as you walk along the beach knowing you have conquered it. There are several tracks to the top, some more difficult than others; allow 20-30 minutes each way.

There is also a very pleasant and gentle walk around the mountain with little beaches and rocky bays to enjoy on the way. Well-maintained and suitable for strollers, the base track is 3.4km long and takes around 45 minutes to walk.

Mount Maunganui has an impressive retail strip, plenty of accommodation options and many exceptional places to wine and dine.