Kathryn Webster takes the back roads, up North.

Two small sharks hung from a pohutukawa at the far end of the beach.

They turned very slowly in a faint breeze, a last dance echo of their swimming lives. I had no idea why they were there attracting flies, but appreciated the chance for a nose-holding inspection of their pale bellies and beady eyes.

The quiet surf arrived and waved and left in constant motion. We’d stopped on Old Russell Road for a stretch and a paddle and decided that this was possibly the loveliest little bay in the world. There was no one else there and with just a handful of houses hidden from the beach, it probably always has a blissful serenity.

We’d left Auckland early in the morning, skirting the busy bits of the city via western back roads. By a stroke of good fortune, we were travelling – a Mercedes-Benz GLC – a luxurious yet unpretentious compact SUV, loaded with impressive high-tech wonders.

By the time we pulled into Riverhead for coffees, I was completely comfortable behind its wheel despite it being twice the size of my usual drive. 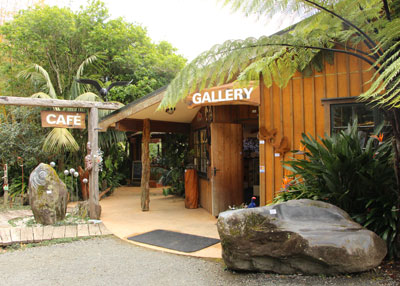 Hikurangi, a small town north of Whangarei, is easy to by-pass but we didn’t. We spent a good half hour rummaging through one of its second-hand shops. For me, the ideal road trip involves treasure hunting.

Art and craft fall into my ‘treasure’ category, so another half hour was spent at a gallery on Helena Bay Hill. Set in a shady tropical garden, the place bristled with interesting work from jewellery and ceramics to paintings, sculpture and hand-crafted furniture.

Down the steep hill, we checked out sparkling Helena Bay. Oakura, the next bay along, snoozed convivially in the afternoon sun. The coast road swept, dipped, rose to views of wide sky, endless sea, islands and headlands. This back road is all classic Northland scenery and we stopped, often, for photographs.

Then to Taupiri Bay, where the tide was in, and where the simple curve of beach demanded a walk to the old trees at one end, where the sharks swung.

Back in the Merc, we swung around corners revealing inlets thick with mangroves, scooped-out little bays, more and more baches and then up, over and we were in the Bay of Islands, perfectly timed for a car ferry crossing to Opua.

Home for the night was the Heritage Collection Waterfront Suites in buzzy, busy Paihia. Our apartment had views of the bay and caught the sea breeze.

On Paihia beach a small girl drew patterns in the sand. I said hello; she responded shyly, in Spanish. Two dogs ran circles around each other and a couple played Frisbee, he one-handed and with a laughing baby on his hip.

There was time to check out Waitangi Treaty Grounds, just down the road from Paihia, so we headed there and paid the $20 asked of New Zealanders – half what overseas visitors pay.

Wandering the grounds, stepping into the ‘storehouse of knowledge’ with its elaborately carved guardians and into the calm, modest Treaty House next door; standing in such an important place – this was an experience every Kiwi should have.

The highlight for me was the recently opened Te Kongahu Museum of Waitangi, where dynamic, multimedia cleverness brought our story to life with colour, sound, enlarged images, artefacts, creatively and compellingly.

Late in the day we took the passenger ferry to Russell for a meal at the Duke of Marlborough: seafood with a view.

Upbeat, sunny Kerikeri was our first stop in the morning, where we only bought takeaway coffee but were tempted with locally produced fruit, vegetables, plants, honey, flowers, chocolates, crafts… Nearby Haruru Falls was a revelation, too; many tourists, up early, photographed themselves and each other with the falls in the distance, smiles wide.

We took a back road past Kerikeri’s small airport, checked out Lake Omapere with its ducks and striped back landscape and detoured into Puketi Forest, up high, driving past clusters of kahikatea for views across plains and farms.

At Mangamuka Bridge, where travellers must decide whether to go north to Cape Reinga or turn west to Hokianga Harbour, we pulled in. The local iwi radio station attracted our attention, so we wandered in to say kia ora. Radio Tautoko promotes speaking Maori, which I found ironic as my parents taught school in the area in the 1950s when Maori language was actively discouraged. It’s probably the kids of those pupils who are now reading the news in Te Reo, keeping the language safe from extinction.

We drove west, past marae, past schools and salty-smelling mangroves where the tidal harbour reaches inland, and found Kohukohu, a romantic darling of a town with quaint old cottages and a surprising number of art galleries. Like many before us, we indulged in a short-lived fantasy of living there, buying a villa with multiple verandahs, an old garden and views of the harbour for not much at all. Down the road a few kilometres a small queue had formed for the ferry. Cars and campervans crammed on; we climbed up to a sheltered lounge to watch the northern coast shrink and the southern sharpen in a 12-minute ride over Hokianga Harbour.

Waterside Rawene is loaded with history. On a sunny midweek afternoon it was subdued, content. Hammering from someone’s renovation project echoed around town. Locals stood chatting next to fences heavy with wild sweet peas. We called into a gallery on the main street corner, showing work by local artists, then lunched on the verandah of Boat Shed Café which hangs right over the water. During a wander around town we found historic cottages, pretty churches and beautifully kept Clendon House.

At Opononi we took ice creams to the end of the little wharf and later, at the harbour mouth before the road turns south, walked to the lookout for a view of the ocean. Across the way the sandhills glowed.

Then down, through farmland, to Waipoua Forest. It’s obligatory to stop and pay respect to Tane Mahuta – the largest Kauri in New Zealand – standing gloriously impressive in the bush, alight with the dark foliage behind him. Further south we detoured to the Waipoua Forest Visitors Centre and paddled in the river there. If the sun had been higher in the sky, we’d have swum in the deep clear water, near the picnic spot. But the day was lengthening, so we stuck to the plan and headed for Baylys Beach, although Kai Iwi Lakes demanded a fast visit and a stretch in the playground. The swing creaked a little under my weight but I’m sure I’m not the first adult to fly through the air there, catching glimpses of the shining lake, startling the birds.

At Baylys, with really good burgers and kumara fries, we watched the sun slip down through a scattering of frothy clouds. The sky was softly golden, pearly, like the inside of a shell.

There were several cars on the beach and surfcasters, though we didn’t see them catch anything. It didn’t seem to matter. It was a lovely place to be at the end of the day.