Monica Tischler is served a platter of warm hospitality in Macao.

Loud cracks ricochet through the chilly evening air. Two youngsters clobber the stone pavement with toy gunpowder balls that explode in fire-cracker-like bangs when flung to the ground.

The raucous laughter and playful noises remind me of the likely atmosphere of times gone by, when Macao’s Coloane Island was a safe haven for Chinese pirates who had committed crimes in South China. The atmosphere feels safe here now; the trouble-makers were only there until 1910.

The sea breeze carries the chatter of locals and tourists, who spill out onto the cobbled streets. Joining the masses of diners, I sip on a freshly husked coconut while ordering lashings of authentic flavours at Nga Tim Café. A local man paces the length of tables, serenading with the sweet melody from his guitar. 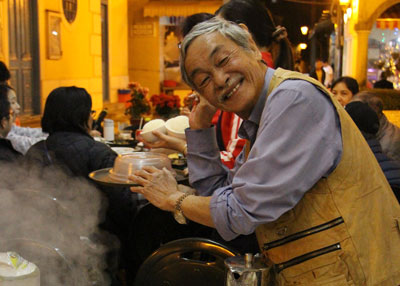 Grazing on traditional Chinese food next to the pale yellow façade of St Francis Xavier Church is one of many scenes of cultural diversity in Macao. The Portuguese were the first Europeans to travel to China by sea and were invited to stay in Macao due to their trading and navigation skills. For many years, they traded on behalf of the Chinese.

Mainland Macao or ‘Old City’ has a beautiful juxtaposition of these different cultures reflected in buildings, relics and cuisine. The now autonomous region was Portuguese territory up until 1999.

Walking crowded pavements – some very narrow and originally built for horseback – I discover a Taoist temple and Catholic church; Chinese shop fronts are decorated with Mediterranean stucco, classical Chinese gardens complete with neighbourhood shrines and temples sit next to solid stone European-style fortresses. Colourful paper decorations, food and wine lay alongside scattered bunches of lit incense sticks: offerings to loved ones no longer here. It’s not unusual to see chicken or duck feet as part of the contributions; it’s tradition for families to leave these on the footpath outside their home as a mode of transport to carry spirits away.

I wander the lush patch of green that’s Camoes Garden, tucked between packed concrete apartments, rickety shops and restaurants. I could publish a coffee-table book displaying what locals have on their balconies; bok choy is threaded onto a string and drying in a patch of sunlight, fish and other meats dangle, and an array of colourful washing flutters in a gentle breeze. The gardens are alive with artistic expressions; groups dance, others retreat to the patches of shade cast by exotic banyan trees, playing traditional instruments, cards and board games. A group of friendly women, their smiles wide, beckon me to join a tai chi routine. Despite the language barrier, we all laugh together while I mirror their movements.

Exercise and enjoying the outdoors is important to the Macanese. Space is limited inside – Macao is very densely populated – so communities utilise outdoor spaces at any given opportunity. Locals walk their dogs and caged pet birds hang from street lamps to combat the loneliness and claustrophobia they suffer cooped up in shoebox apartments. Their owners keep a watchful eye from nearby park benches.

I follow the mosaic pavement from Senado Square, Macao’s historic heart, to the grand Ruins of St Paul’s. The intriguing stone façade of the early 17th century Jesuit church is all that remains after a destructive fire in 1835. 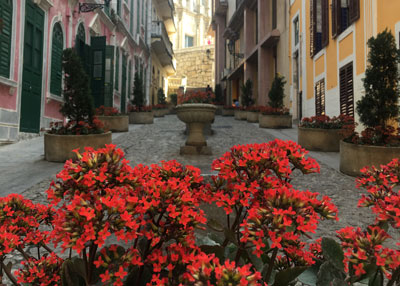 While the streets are alive with a vibrant energy in some parts of Macao, it couldn’t be more different in others. There’s an eerie silence in Cotai, the strip of newly reclaimed land that, in 2005, saw two independent islands – Taipa and Coloane – become one. It’s a tourism mecca here so why are the streets so quiet? At first, the concept seems strange to fathom. But when I venture into some of the resorts – The Wynn Palace, Macao Galaxy Resort, The Venetian to name a few – I understand the appeal of spending time indoors. Resorts here are treasure chests teeming with high-end shops, world-class restaurants and bars, casinos and theatres presenting Broadway performances and awe-inspiring acrobatics shows.

A gondola takes me over a vast, man-made expanse of water, above an impressive display of ricocheting water – like The Fountains of Bellagio in Las Vegas – to the Wynn Palace. I’m disorientated inside The Venetian. The interior is a replica of Italy’s Venice, complete with canals and gondolas, steered by captains donning striped shirts and red hats. I would’ve been fooled for the real deal if it weren’t for the impressive array of shops and the world’s largest casino interrupting the quaint European vibe. Macao has gained a reputation as the ‘Vegas of the East.’ In fact, it far surpasses America with its glitzy casinos that light up the skyline in glowing neon. But it’s certainly not the only drawcard.

I could happily get lost down the alleyways in Taipa Village; colourful concrete walls adorned with beautiful murals make for picturesque strolls. I find refuge from rain inside Portuguese restaurant, Antonio, tucked down one of the many pretty cobbled lanes. A waiter strums his guitar and sings as I eat. Intimate musical performances are a specialty I’ve grown to love here. So, too, are the incredible flavours guaranteed at every meal. Macao is, after all, listed as a Unesco Creative City of Gastronomy. I raise my glass and toast to good health and happiness.

Hong Kong Airlines flies direct from Auckland to Hong Kong International Airport. From there a high-speed TurboJet departs to Macao via the Pearl River Estuary. A 55km bridge and tunnel linking Hong Kong, Macao and China is scheduled to open this year.

Sofitel Macao is within walking distance of Old Town while the ultra-modern MGM Cotai is in the heart of the casino district.

The writer travelled courtesy of the Macao Government Tourism Office. Grab AA Travel Insurance or call into an AA Centre to make sure you’re covered on your travels.

AA Directions is giving away a Torpedo7-branded children’s bike valued at up to $429.99 to celebrate...