The ocean can be as exciting as space, and it’s much easier to explore. With lots to love beneath the waves, from tiny little anemones to giant charismatic megafauna, you’d be missing out on a whole heap of wonderful if you never took a peek beneath the surface. Luckily for us, New Zealand has miles of sensational snorkelling spots that you don’t need a boat to access.

With picturesque pohutukawa fringes (and less photogenic oil refinery over the water), it's best enjoyed at high tide with visibility usually sitting around the four-metre mark. Look out for parore, mullets, eagle rays, nudibranchs, sea slugs, kina and baby sweep, and remember to give way when the kingfish buzz through. If your eyesight’s sharp, you’ll see plenty of shrimps and, if you fancy a manicure, lay your palms on a rock and let the little triplefins sit on your hands and nibble at your fingers.

Beyond Matakana on Leigh Rd, pull up beside the Whangateau Holiday Park at the reserve next to the campground and head for the lone mangrove. Mangroves alone are stunning to view underwater, as are the schools of parore, spotties and baby mullet who’ll be playing in Neptune’s necklace. Ideally you’ll want to snorkel here 45 minutes either side of high tide, because the current can rip through at mid-tide, and at low tide there’s no water. But on a good day at the right time, you can see more fish here than at nearby Goat Island. Be warned: because it’s not very deep, you need to check for basking eagle rays before putting your feet down. You’ll also find plentiful pipi and cockles here, but following a mass mortality event in 2008 there’s a ban on collecting shellfish. 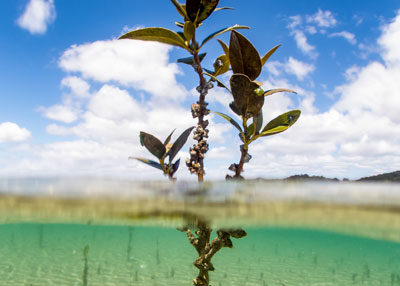 Park at Cathedral Cove and walk 15 minutes down the track, whereupon you’ll come to a sign pointing to Gemstone Bay. There you’ll find a snorkel trail that consists of four buoys with interpretation panels attached to them. Because the buoys have handles on them, this is an excellent site for less confident sea swimmers. You should see supersized snapper, elegant eagle rays, crayfish and lots of waving kelp and weed. As a rule you’ll enjoy about seven metres of visibility with an option for deep-water snorkelling, too. There needs to be no more than half a metre of swell though, otherwise this spot can be dangerous.

Taking its name from the footstep left behind by the great ancestor Rongokako of the Takitimu waka, this reserve is 16km north of Gisborne and can be reached via SH35, with public access at Pouawa where you’ll find car parks, toilets and picnic tables. Home to over eight different marine habitats, including sediment flats and an inshore reef, snorkellers can enjoy the sights here without having to go deep. The shallow reef is best enjoyed at low tide, because once there are white-caps, the surf can knock you around. But when the tide is right, gaze at crowds of crayfish in chest deep water, triplefins, spotties, banded wrasse, marine snails and a range of sponges. There are also loads of kina here, so watch where you put your feet.

Starting at the Island Bay Marine Education Centre, head straight out from the old surf club building and you’ll find yourself swimming with schools of jack mackerel, greenbones, blue moki and spotties, not to mention nudibranchs, starfish, crayfish, octopuses, blue moki and yellow-eye mullet. The paua here are huge, their dark frilled lips kissing on to the rocks, while the green algae, known as sea lettuce, appears so bright it’s almost fluorescent; when the spotties eat it, they turn bright green, too. Watch out for the remarkable wandering anemones, slippery and silky and soft to the touch, and say
‘kia ora’ to Colin the resident conger eel.

Enter the water at Glenduan, 12km north of Nelson, or kayak from Cable Bay’s rocky beach to access the northern tip of the reserve. The most common fish here is tarakihi; you’ll also be able to see ambush starfish, seahorses, goatfish, blue cod, blue moki and wrasses. If there’s cloud covering the peak of Mt Horoirangi, which overlooks the reserve, that’s usually a sign bad weather is on its way.

Famous for its golden sand beach and sculptured granite rocks at the southern end of the reserve, you can’t drive here but it’s pretty easy to find by kayak, water taxi or by hiking in. With the reserve spreading out over 1,835 hectares, you’re likely to see crayfish, blue cod, tarakihi, moki, snapper, seals, octopus, little penguins, even dolphins. Visitors are advised to always keep at least 20 metres from the seals.

Reported by Elisabeth Easther for our AA Directions Autumn 2021 issue

Stay safe
• Check the marine forecast before you head out.
• Dive with a buddy.
• Tell someone where you’re going and when you expect to be back.
• Pack the appropriate gear for the conditions.

Experiencing Marine Reserves (EMR) helps people enjoy our unique oceanic environments with a focus on education and conservation. Visit EMR  to find out about free snorkel events this summer.