There’s a time on every southern African safari when it’s essential to put down your camera. Turn off the autofocus, pop the lens cap back on and simply be in the moment as a huge herd of elephants slowly crosses the river right in front of your boat.

For an hour, our Pangolin Photo Safaris boat has been the perfect platform to capture the riverine diversity of Botswana’s Chobe National Park. Individual seats swivel and pivot and the super-effective zoom lenses allow photographers to easily capture wildlife, big and small. Quizzical bushbuck antelopes maintain eye contact as we slowly drift past, a pair of indigo monitor lizards bask statue-like in morning sunshine; birdlife ranges from hyper-energetic bee-eaters to a cormorant trying to swallow a fish that’s a few sizes too big. When a few hundred of Botswana’s estimated 130,000 elephants start crossing the Chobe River just metres away, we’re suddenly immersed in a scene straight from Animal Planet.

There’s seemingly no rush for the pachyderm party to cross, en route to Namibia’s Caprivi Strip, part of the massive five-country Kavango–Zambezi Transfrontier Conservation Area the elephants have unrestricted access to. Juvenile elephants barely one metre tall escape the protective halo of their mothers’ and aunts’ legs to tussle and tangle in a pool of silky mud, while adolescent bull males continue their exuberant play-fighting mid-stream. Approaching the riverbank on the Namibian side, arched trunks are used as snorkels in the deeper water, and the smallest and most vulnerable of the herd are given a final push up onto dry land. 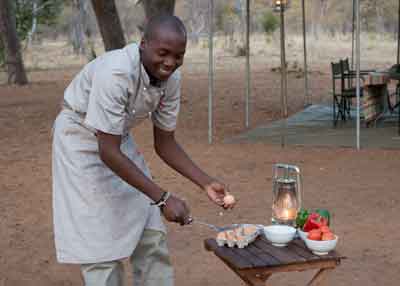 Elephants are not the only stars in Chobe, and for three days andBeyond’s Chobe Under Canvas tented camp is our base to explore one of southern Africa’s most wildlife-rich areas. With just five spacious guest tents – complete with ensuite bathrooms, hot bucket showers and probably the most comfortable beds in the African bush – we quickly submit to the enjoyable routine of safari with our guide and driver, KD Jeremiah. Served during the still of an African pre-dawn, breakfast includes scrambled eggs and hotcakes cooked on the camp oven, while conversations over the first coffee of the day serve to check if anyone else heard the guttural roar of lions during the night. We’re only slightly reassured by KD’s authoritative claim that sound travels a long way in the African bush.

Rotated regularly around a variety of campsites and bush clearings, Chobe Under Canvas is one of the only accommodation options actually within the national park’s boundaries. Guests at other lodges can only enter when the park opens at sunrise and must depart at sunset, providing us with an hour’s additional game viewing, both morning and night. More often than not it’s during these cooler, quieter times, sound tracked by copious local birdlife that the magic really happens.

Some species are ridiculously easy to spot. With their heads sticking almost comically above spiky tangles of acacia branches, giraffes cement their reputation as the world’s worst animals ever to play hide and seek, while Chobe’s plentiful herds of impala reinforce the maxim ‘safety in numbers.’ Often covering the national park’s red dirt roads like flocks of sheep in rural New Zealand, KD informs us impala are Botswana’s most abundant antelopes.

He’s also a big fan of southern Africa’s ‘ugly five,’ a quintet of species that is the aesthetically challenged alternative to the traditional ‘big five:’ lions, leopards, elephants, rhinos and Cape buffalos. Equipped with KD’s world-famous-in-Africa experience and his oft-whispered mantra – ‟patience…”, our regular morning and afternoon game drives soon tick off sightings of wildebeest, hyaenas, vultures and a few furtive-looking Marabou storks. When a surprised warthog is chased along the riverbank by a playful teenage buffalo, ‘big’ and ‘ugly’ come together in an entertaining vignette. 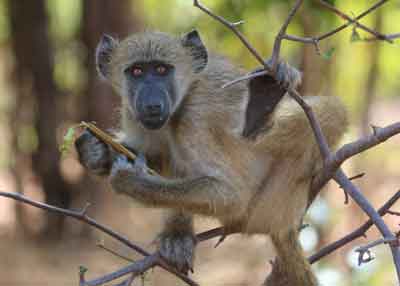 Our additional hours of game viewing at sunrise and sunset also provide the opportunity to sight the big cats we’d heard calling in the early hours of the morning. After a cloud-bursting late afternoon thunderstorm eased around camp by iced tea and freshly-baked banana cake, KD rounds us up with the promise of ‘when it rains on safari it’s a blessing.’ Following the rain, there’s unbelievably even more impala sheltering together for protection.

As we approach the Chobe River, KD notices a big group of very animated baboons making lots of noise and decamping to the upper reaches of a nearby tree. ‟A baboon hotel!” he jokes, but he also knows it means lions are close by.

Illuminated by the soft glow of late afternoon sunshine, a pair of lioness siblings are, indeed, padding and patrolling the nearby flood plain, occasionally drinking at a compact bend in the river and preparing for a night of hunting. Three raggle taggle cubs are struggling to keep up just a few metres behind, with their relative slowness made worse by a desire to roll around and play-fight in the glades of long grass framing the river.

Vehicles from other lodges begin their journey to leave the national park by sunset and, along with guests in just one other Chobe Under Canvas Land Cruiser, we soon have the evening’s big cat cameo all to ourselves.

Just after dawn the following morning we’re equally lucky to have front row seats as the same lions feast on a freshly-killed carcass. Unfortunately for one impala, the night in Botswana’s Chobe National Park did not end so well.

Reported by Brett Atkinson for our AA Directions Summer 2019 issue

The writer was hosted in Botswana by andBeyond and World Journeys which organises tailor-made safaris and small group escorted tours in Africa.