The jet boat ride up the Waiatoto River in Haast is not a thrill-seeking-360º-spins kind of experience, rather a cruise to discover some of the region’s remote and pristine landscapes.

Taking you to places that are otherwise only accessible by foot – and then only after several strenuous days of walking – the safari tour allows you to explore the remarkable wilderness of the West Coast. 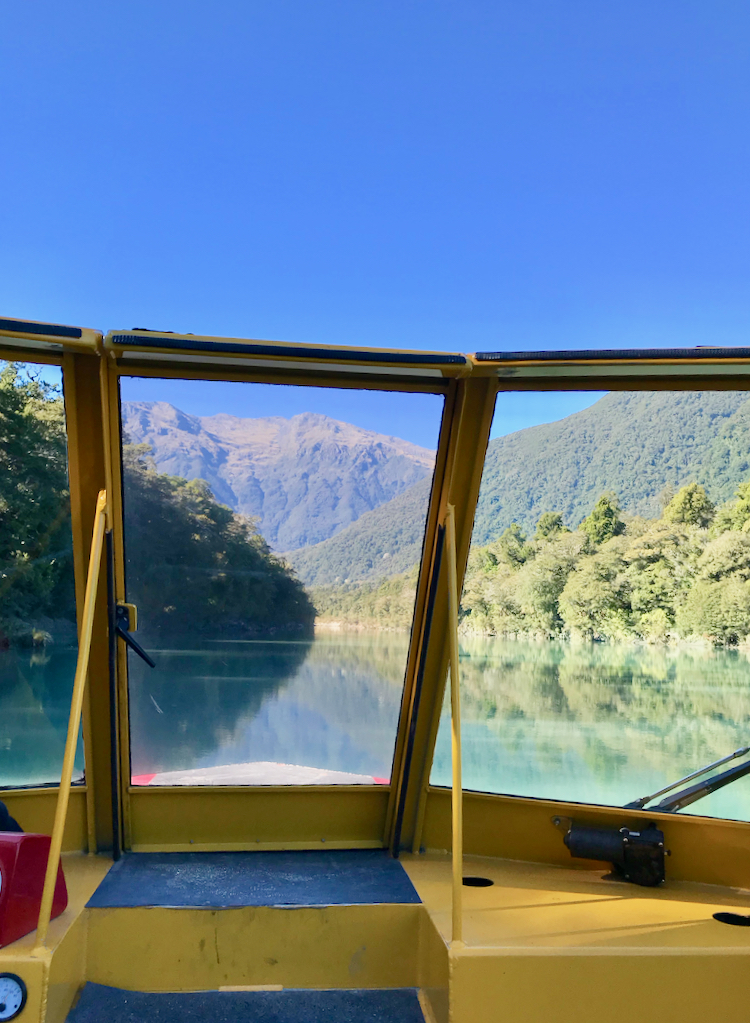 On board the Waiatoto River Safari. © Jo Percival

Our guide and jet boat pilot, Wayne, steers us against the current, stopping intermittently to point out significant features alongside the river. We pull over next to a kiwi sanctuary set into the bush. Hemmed in between the natural boundaries of a creek and the river itself, the sanctuary is home to 400 brown kiwi.

As the birds nest on the ground, eggs are incredibly vulnerable to stoats and other predators when the parents are foraging for food. In the sanctuary, kiwi are monitored and their eggs are collected and taken back to the West Coast Wildlife Centre for hatching. Juvenile kiwi are then transported to a predator-free island before they’re returned as adults to the sanctuary.

This is the land of gold and pounamu. Though Māori thought the early prospectors were nuts for obsessively hunting the soft, useless metal, as opposed to the strength and practicality of greenstone.

It's a rare, clear day on the West Coast. © Jo Percival

Each year this part of the country receives around 2.5 metres of rain. And when it rains, it does it with total enthusiasm. We’ve arrived on one of the rare cloudless days when the lush bush and pastel river both seem to gleam in the sunshine.

On the not-so-clear days, the river can rise up to two metres in an hour, and subside just as quickly. As we pass, the banks are still scarred from recent flooding, with huge trees torn from their roots, banks undercut and undergrowth flattened metres above the river into the bush. Wayne tells us that with all the post-flood debris in the water it’s like travelling the river for the first time.

Volta Glacier is at the head of the Waiototo River, which is what creates the milky blue colour, caused by tiny particles of sediment suspended in the water. The aquamarine colour is so vibrant it doesn’t quite seem real. 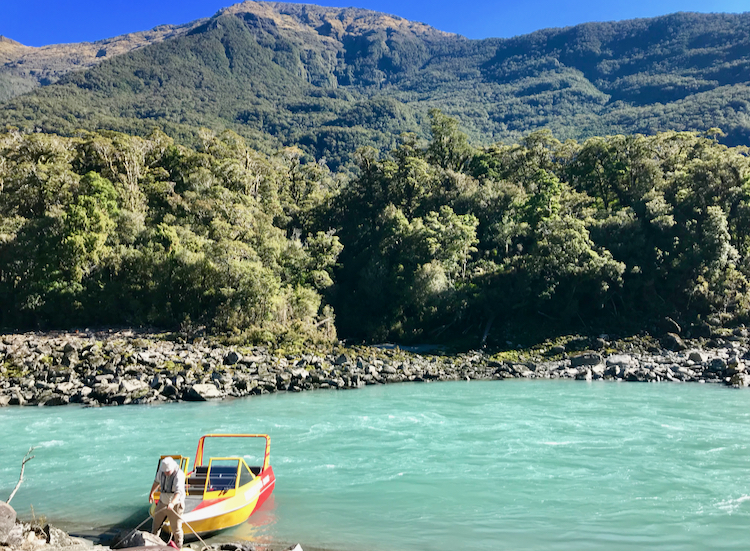 We make our way as far upstream as possible, stopping at the impassable Shark’s Tooth rapids where we disembark at a sandy beach, studded with boulders that glint in the sunshine – their layered strata like stacked pancakes.

Haast is a UNESCO World Heritage Area. There was no road access to the area until 1965, so it was never viable to mill for timber here. As a result, this pocket of the West Coast is considered to be one of the most authentic representations of Gondwanaland left in the world.

From the riverside, we take a short stroll through matai and rimu forest, dripping with moss and epiphytes – ferns and orchids emerging from trunks and branches; growth on growth.

After a cup of tea and a freshly baked scone, we clamber back on board the jet boat and head towards the coast.

The unreal, glacial hues of the Waiatoto River. © Jo Percival

Near the sea, the river transforms from the pastel teal of the glacial flow to brackish brown. We pass whitebait stands – metal wharfs retracted from the water for the offseason. Whitebaiting is a popular and lucrative pastime on the coast.

Hindley stream is an adjunct to the Waiatoto river. We veer off to the tanin-stained, tea-like water where Wayne kills the boat’s engine and we sit in the sunshine, absorbing the silence and the sound of native birdlife.

Stands of kahikatea rise from the banks – New Zealand’s tallest trees which can live for up to 3,000 years. Near the water’s edge, fantails flutter amongst kōwhai fronds.

While brown, the water is not murky – we can see down to the bottom from the boat. The shallows here are a breeding ground for whitebait, eel, flounder and brown trout.

The safari takes us on a succinct journey through the different landscapes and ecosystems of the West Coast, from luxuriant rainforest to coastal dunes and the changing hues of the incredible river, all in one remarkable experience.

What's the weather doing in Haast?

The southern corner of the South Island’s West Coast is home to landscapes so wild and spectacular, it has been recognised by UNESCO as an area of international significance.  Read the story . . .

South Westland: a wonder of the world

The bottom left-hand corner of our little country, South Westland, is a world-renowned UNESCO World Heritage area. Read the story . . .

What's the weather doing in Haast?