Arthur's Pass: to the other side

Centuries ago this alpine pass was traversed by Māori in search of pounamu and moa. Today the landscape is punctuated with small towns that cling to the geography despite harsh wind, snow and mercurial populations.

I am on the road to Arthur’s Pass – named after the chief surveyor Arthur Dobson. It’s a winding road with a 16-degree pitch and on both sides the mountains are raw and rugged without their winter white.

Beside the road, I spot a cluster of irregular rocks protruding like turrets. A reads ‘Castle Hill’.  Māori called this place Kura Tawhiti – ‘treasure from a distant land’.  Limestone pushed upwards, has been sculpted by water into distinctive curvaceous forms – a mecca for practising climbers.

I stop at the midpoint of the pass for coffee. Sitting outside, a steady stream of trampers passes by and delights in the antics of a kea on a nearby table as it rips apart a stolen chocolate bar.

The route takes me into the Ōtira Gorge. Here, the roads are a marvel of engineering and human endeavour with sections literally ‘clipped’ to the stone cliff face. In the terrible winter of 1865 men laboured with pick and shovel to carve a road linking Christchurch with the West Coast goldfields. The sign ‘Death’s Corner’ marks a lookout over a spectacular curving viaduct that spans the gorge.

The drive through Arthur’s Pass @leximphoto

The Brunner Mine on the edge of the Brunner River is signalled by a 14-metre brick chimney built in 1904, an imposing sentry to the old mine entrance. This site marks the birth of New Zealand’s coal-powered age and growing prosperity.

It is also the scene of tragedies, the worst being the disaster of March 1896 which saw the loss of 65 lives. More recently the Pike River Mine disaster in November 2010, which killed 29 has wreaked havoc on the prosperity of Greymouth.

I arrive in the early afternoon. All is quiet, with the exception of Mawhera Quay where the Speights Ale House is located. Mawhera – the menu tells me – is the Māori name for ‘bright running waters’, referring to the periodic flooding of the nearby Grey River. I order a venison pie and peer at photos from 1905 of a swamped Quay.

The following morning I continue along the coastal road towards Westport, the smell of the sea carried on the wind. The beaches are strewn with pale driftwood, dried seaweed and rocks of all colours shaped smooth by the waves.

Halfway between Greymouth and Westport are the Pancake Rocks at Punakāiki. These giant limestone formations have been sculpted by the relentless movement of tide, wind and rain, which has worn away portions of rock, leaving the most exquisite layered forms.

My kind of playground 🌊

Westport has a liveliness not present elsewhere on the coast. Much of its population growth is due to the influx of miners from South Africa, Australia and Fiji and, of course, those who left Greymouth for the safer open cast mining that Westport supports.

Take @talman 's advice and hit the road on one of the most epic stretches of road from Westport to Haast following The Great Coast Road and the Glacier Highway. #westcoastnz

Continuing on the highway takes me through Reefton, the first town in the southern hemisphere to have electricity and street lights. To walk down its main street is to traverse 150 years of New Zealand architecture.

The buildings are either restored or reconstructed in architecture of the period. There are attractive wooden awnings with hanging baskets, weatherboard facades that reach high above the roofline and wooden floors worn smooth by 100 years of shuffling feet.

The river keeps me company down State Highway 69 when, without warning, the road narrows to a single lane. Incredibly, it is simply hacked out of the stone cliff face, dropping sharply to the river on my left. I inch forward, anticipating an oncoming vehicle at any moment.

A long breath escapes me when the road widens and winds its way into the Victoria Forest. Soon I am driving through dappled light under a magnificent canopy of Mountain Beech. The trunks on either side rise tall, a sooty charcoal colour with smudges of silver and orange. Green leaves glow where light has squeezed a passage through the thicket.

I spend the night at Maruia Springs, an onsen: hot springs with Japanese style bathing. The resort is loaded with therapeutic promise; a restful soak in natural healing sulphur springs, a shiatsu massage, accommodation overlooking the river and mountain and fine dining. It is tucked on the edge of a river with its back to the Lake Sumner Forest Park.

Moody mornings at Lake Sumner Forest Park 🌲 A great option for “off the beaten track” fans as it is so remote! 📸: @jayfrench #canterburynz #hurunuidistrict #nzmustdo #secretspots #hiddengems

For more than a century Maruia has attracted visitors to its springs. Before that, Māori hunting parties likely bathed their feet in the soothing waters. I’m told that soaking in a hot spa for 40 minutes will lose me 300 calories. The river is gurgling over rocks and tūī are yodelling as I slip into 45-degree waters and watch the glow of a golden sun slip behind the hills.

The one who follows the crowd will usually get no further than the crowd. The one who walks alone is likely to find herself in places no one has ever been. Albert Einstein 📷@danbrannanphoto

Nine kilometres off the state highway is Hanmer Springs, a township at the foot of Mt Isobel. The streets are immaculately maintained, gardens and lawns finely manicured and a central boulevard is edged with 100-year-old Canadian Redwoods. With a permanent population of around 700, visitors flock to the town all year round to take advantage of the hot pools. 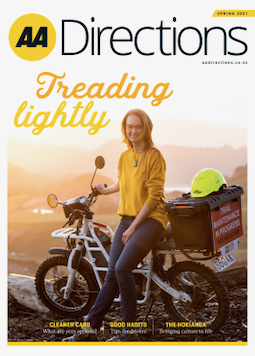 The high mountains of Arthur’s Pass National Park are the ‘backbone’ of the South Island and the pass itself is the key link between east and west. Read the story . . .

TranzAlpine: one of the best rail journeys in the world

Feast on one breathtaking view after another as you travel from Christchurch to Greymouth. Read the story . . .

In this part of the world, civilisation has only chiselled a few narrow paths into the landscape. The elements – the wind, the rain and the ocean – are always trying to claim that land back. Read the story . . .

Funny that Māori should have had a word that sounded so much like the English word for ‘pancakes’. Read the story . . .