Known as Roto-Vegas for good reason, the Rotorua tourist trail is bright, exciting and loaded with thrills.

Sure, the area is a mecca for tourists, but it is very good at what it does. Activity operators are seasoned pros – they have crowd management and delivery of adrenaline down to a fine art.

By Rotorua standards, our first stop is pretty tame.

The redwoods forest in Whakarewarewa is spectacular, with over 5,000 hectares of enormous Californian coastal redwood trees to run, ride or wander through. But drinking in the views from 12 metres above the forest floor, amid twinkling lights is something else.

The Redwoods Nightlights are turned on each day at dusk, when the forest glows with the iconic shapes of Hawke’s Bay artist, David Trubridge’s huge sculptural light shades.

Suspended high in the trees, the 500-metre-long network of bridges and platforms takes us on a leisurely stroll through the majestic redwoods – the tallest living trees on earth. In Rotorua, the forest is relatively young, having been planted in 1901, with the largest tree reaching 72 metres. But in the US, there are 2,000-year-old redwoods that stretch up to a staggering 115 metres high.

As the last of the daylight ebbs away, the forest comes to life. A kaleidoscope of colours lights up the canopy of native ferns below us; above, the yellow glow of UFO-like sculptures hang from the mighty trees. We’re mesmerised.

It has been scientifically proven that spending time in nature makes you smarter. The Redwoods Nightlights certainly makes us feel more relaxed and filled with awe.

Operating since 1985, the Skyline Luge is one of Rotorua’s iconic attractions and a rite of passage for Kiwi kids. The adults of our group have fond memories of our own childhood holidays hooning down the concrete tracks. Our kids are just as excited.

Because of intermittent showers, the Advanced track is closed on the day of our visit, but the Intermediate still provides significant thrills, especially in the wet.

It’s hard not to get a bit competitive, hurtling down the hill, jockeying for position on the ingenious, gravity-propelled plastic carts. 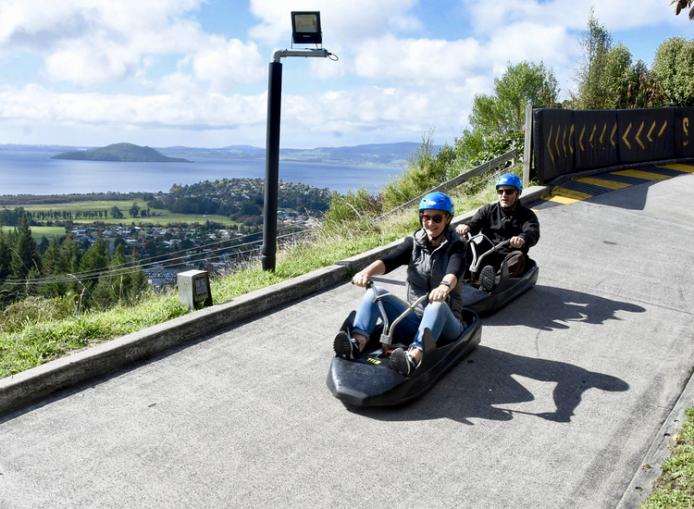 After several increasingly speedy runs, we’ve figured out which corners to cut and the dips where it’s best to lay off the brakes altogether for maximum thrills. By the end of the morning, even the six-year-old feels brave enough to tackle the track on his own.

Kiwis are renowned for coming up with some crazy inventions. The Zorb is one of them. Brothers David and Andrew Akers, the inventor of downhill ball rolling, originally founded Zorb company in 1994. As innovators, these guys certainly know what they’re doing.

The idea of squeezing into a large inflatable ball and rolling down a hill made me feel mildly anxious and prickly with pre-emptive claustrophobia.

But there’s actually nothing scary about a Zorb ride. In fact, we didn’t expect it to be quite so hilarious.

We slosh and splash; slip and slide inside a warm plastic bubble, cackling with involuntary laughter for the full two-minute ride down the hill and lie in a heap of giggles at the bottom.

The kids squeeze out of their Zorb next to us, wild-eyed with excitement – ‘Again!’

A visit to Rotorua wouldn’t be complete without experiencing some geothermal action. Hell’s Gate, in Tikitere, is marketed as ‘the BEAST of all geothermal parks,’ so it’s the obvious choice for the young boys of our group.

The sprawling geothermal park is home to bubbling mud, hissing hot water and clouds of sulphurous steam. Some simmering pools are up to 25 metres deep; others are in excess of 100ºC. We marvel at the geology of the area, where the earth’s crust is so thin you can actually see it.

Hell’s Gate is also one of the few places in Rotorua where you can immerse yourself in sulphurous mud, rather than just looking at it. 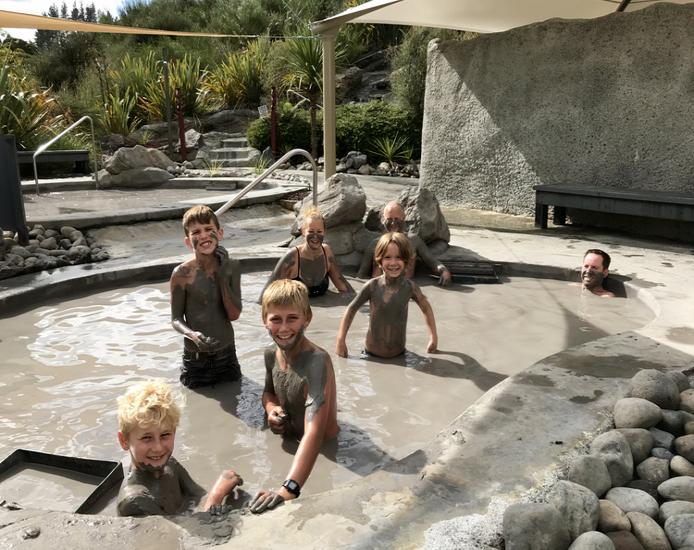 We sink into a warm, murky pool and scoop handfuls of silky and surprisingly soothing mud onto our skin. The kids delight in slathering themselves in grey ooze.

We rinse off and retire to the steaming sulphur spas next door, emerging sometime later, par-boiled pink and wobbly with relaxation.

Like after any good trip to Rotorua, we drive home smelling faintly of sulphur.

With hot pools, natural springs and 18 picturesque volcanic lakes to choose from, there are many bodies of water worth visiting in Rotorua. Read the story . . .

Five picks for a weekend in Rotorua

There's plenty to keep you busy for a weekend escape in Rotorua. Read the story . . .

Adventure time: embracing the laws of physics in Rotorua

Millions of people have ridden the luge since it opened, and the vast majority of them have survived. They’ll swear by it...  Read the story . . .

From fumaroles and mini geysers to steaming stormwater drains, Rotorua has hot water and boiling bogs to burn.  Read the story . . .