Southern Lakes: a place for all seasons

In the constellation of New Zealand’s most scenic places and star attractions, the Southern Lakes region burns so brightly that, if it were up in the sky, it would surely be visible in full daylight.

I like to think of it as a binary star system of two polar opposites. On one side Queenstown, the self-proclaimed adrenalin capital of the country, if not the world. This is the birthplace of modern bungy jumping and other daredevil pursuits; a jet-set backdrop for movies and car ads, fast, hip and glam, pulsating, neon-like, to the rhythm of an excited heartbeat. On the other side, less than an hour away over the Crown Range, mellow Wānaka radiates a more serene, relaxed kind of beauty and vibe, but blazes just as fiercely.

Last day with @south_of_home taking over our Instagram account. The Milky way rises above the Queenstown as seen from the famous Skyline viewing deck. This unique vantage point provides phenomenal views of beautiful Queenstown! Thanks for having us! #queenstownlive

Together and apart, both towns and their surrounds exert an irresistible pull of gravity on the visitors’ hearts and imagination. You experience them once and, like a comet, you’ll be back again and again. Many of us have been permanently trapped in this force field of attraction.

We will never tire of that view 📷 @carloscostan

For me, from that fateful first encounter decades ago, the gravitational pull of the Southern Lakes has been so strong. It has never allowed me to leave... not for long anyway.

It’s the scenery, for sure... all those Sound of Music alpine vistas where you can be your own Julie Andrews. All the huge lakes fitting into the mountains like pieces of an epic jigsaw puzzle, brimming with pure water and trout. The rivers, forests and the dry Otago highlands, with national parks on one side, vineyards on the other.

But the scenery, no matter how pretty, is only the surface of things. Our attraction comes from a deeper place. The name Wānaka is said to derive from the South Island form of the word wānanga, meaning sacred knowledge or a place of learning. I have certainly learned here, not only skills in the multitude during outdoor pursuits, but also those more profound things, too. What are life’s priorities? How to discern between what is worth knowing and what to ignore? And how do we meaningfully balance work and play?

In 2010, in a stroke of marketing genius, Wānaka branded itself 'the world's first lifestyle reserve'. Even though it's been changed since to us locals the concept is both descriptive and wildly true: it gives you a fair idea of what living in the Southern Lakes is about.

It’s the kind of place where many cars are fitted with roof racks and have a permanent fixture of either a kayak or a SUP, sometimes both; where you can nip out from work for an hour during lunch and lose yourself in a maze of world-class mountain-biking trails.

The 'powder clause' is an unwritten but respected rule in most work contracts here.

When fresh, deep snow settles on the mountains and the weather clears, the tradesmen down their tools and shops hang out 'Powder day! Back in the afternoon' signs. On such days, you won’t get anything done. The towns are deserted as most of the population head up the mountains, indulging one of the greatest joys known to humankind, skiing or boarding pure and pristine snow, sparkling as if it were made of microscopic diamonds.

The Southern Lakes is a hard place not to be fit and healthy. The outdoors here feeds body and soul, and inspiration is around every corner. Here your local GP is a top multi-sport endurance athlete. And the girl who serves you your morning coffee is a paraglider pilot. And up on the mountain, you can discuss the finer points of cross-country ski-skating technique with happy smiling septuagenarians, but only if you’re fit enough to keep up with them.

Another unmistakable feature of the region, of course, is its seasons, all as distinct as movements in a concerto.

After the sensory austerity of winter, spring is an explosion of smells and colours, the greening of the land, the blossoming of the fruit orchards.

The fishing season re-opens, the bike trails dry off and life is full of promise and new beginnings.

Summer is sunny and hot like a long siesta and it’s all about barefoot living, lake swims and picnics.

Autumn comes pensive and dignified, with rows of poplars – originally planted as windbreaks – turning gold and endlessly backlit by the sun, burning like tall candle flames, while other deciduous trees lose their leaves in a rain of russet yellows and browns. Arrowtown is particularly spectacular at this time, a little town straight out of a western movie, consumed by the blaze of trees in colour.

And then winter comes again and every snowfall feels as refreshing as a coat of new paint on the landscape, filling everyone with the anticipation of powder days and playing in the snow.

The Southern Lakes is the kind of place Vivaldi would have found inspiring. A place for all seasons. This is why, after all these years, I’m still living here. It’s always exciting to leave, to travel and to immerse myself in other cultures and different landscapes, to live another life, however briefly. But it is always even more thrilling to come home, back to the Southern Lakes.

If you sample the delights of the world’s first lifestyle reserve, you may find it hard to leave, as many of us have. The Lakes do that to people. Just the other day on the sunny slopes of one of the ski fields, I greeted a local with the customary, 'How are you?'

He smiled and said, 'Always good.' In a place like this, how could it be otherwise? 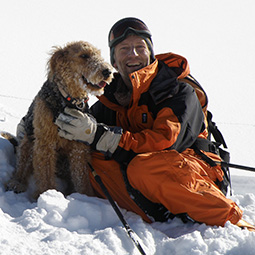 Long-time Southern Lakes local Derek Grzelewski is a writer, adventurer and fly-fishing guide based in Wānaka.

He is the author of internationally-acclaimed books Trout Diaries, Trout Bohemia, Going to Extremes and The Smallest Continent and is a regular contributor to a number of magazines, including New Zealand Geographic and National Geographic Traveler. You’ll find him at www.DerekGrzelewski.com

Show me more by Derek Grzelewski

Check out more of Queenstown...

The beauty of Arrowtown is that it was built to last and if you look carefully, you’ll get some sense of what life was like for the gold miners who originally founded the town.  Read the story . . .

Few people find themselves out in the mountains at night, so quite apart from the skiing, just being on the slopes under the stars is an unusual and affecting experience. Read the story . . .

Lake Wānaka is a scenic spot all year round, but it's particularly picturesque in autumn...  Read the story . . .

Long-time Southern Lakes local Derek Grzelewski is a writer, adventurer and fly-fishing guide based in Wānaka.

He is the author of internationally-acclaimed books Trout Diaries, Trout Bohemia, Going to Extremes and The Smallest Continent and is a regular contributor to a number of magazines, including New Zealand Geographic and National Geographic Traveler. You’ll find him at www.DerekGrzelewski.com

Show me more by Derek Grzelewski

Check out more of Queenstown...