Seen from above, the Egmont National Park on the western coast of the North Island forms almost a perfect circle, surrounding the beautiful Mount Taranaki.

This majestic mountain dominates the area, and its near-perfect cone has even starred alongside Tom Cruise in a Hollywood movie, so close is its resemblance to Japan’s Mount Fuji.

Mount Taranaki photographed late in the evening from near the sea cliffs at Tapuae. © Dave Young Creative Commons

The 2518 metre tall Taranaki is venerated by Māori and its summit is sacred to the Tangata Whenua of the area. In Māori, ‘tara’ means mountain peak, and ‘naki’ is thought to come from ngaki, meaning shining, in reference to the snowy upper slopes. It was also named Pukehaupapa and Pukeonaki by iwi who lived in the region in ancient times. 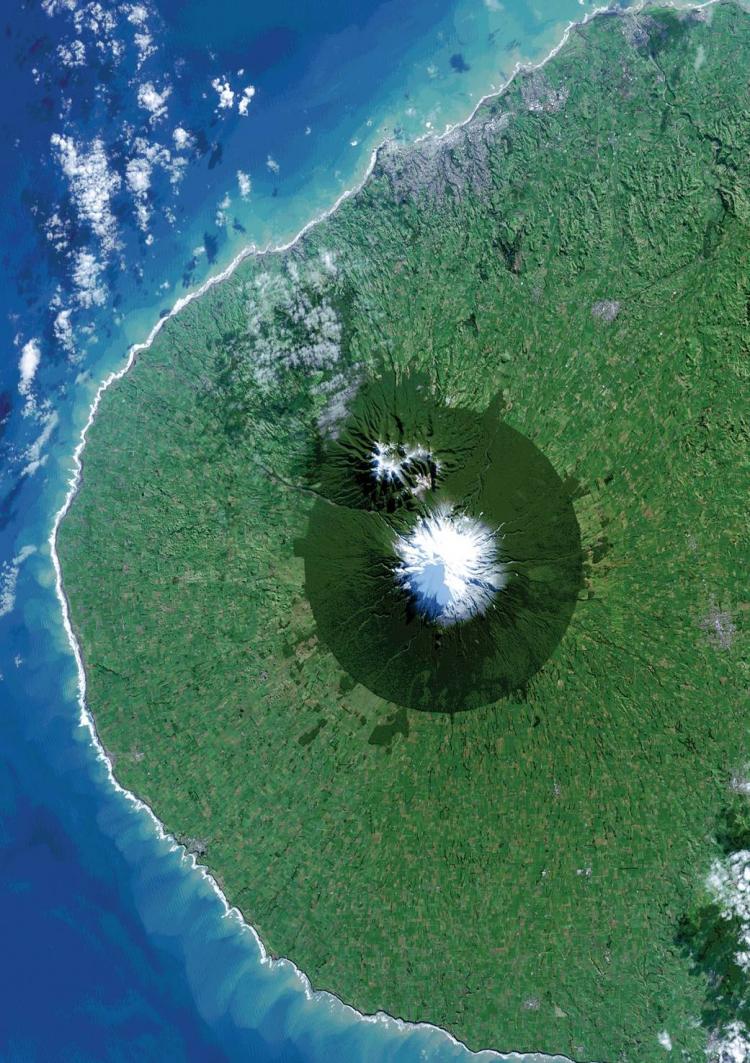 This Landsat 8 image acquired on 3 July 2014, clearly shows the park, with Mount Taranaki at its centre. NASA/USGS

Captain Cook named it Mount Egmont in 1770 after John Perceval, Second Earl of Egmont. Cook described it as ‘of a prodigious height and its top cover’d with everlasting snow’, surrounded by a ‘flat country... which afforded a very good aspect, being clothed with wood and verdure.’ 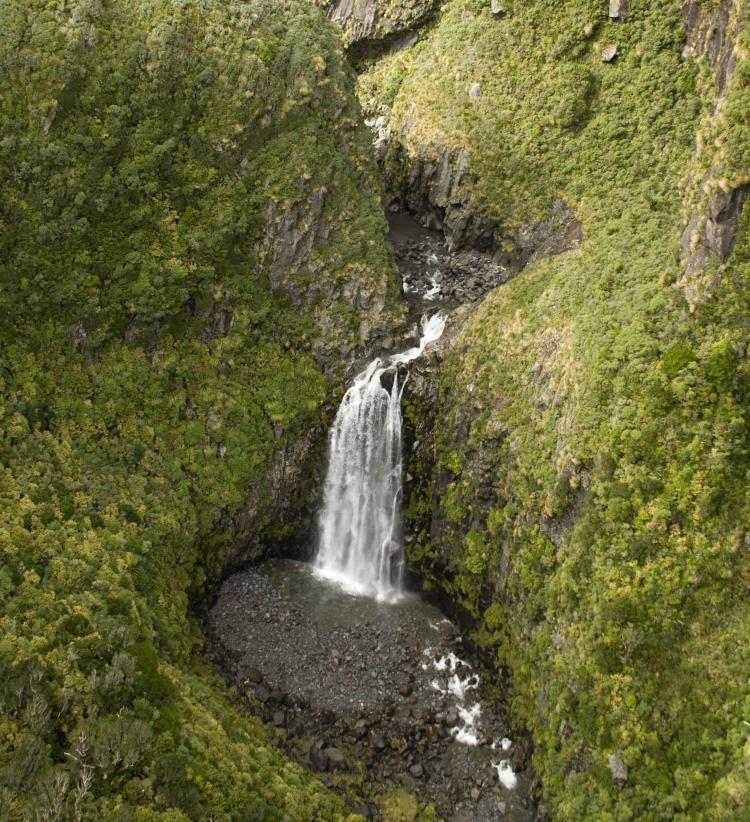 It appeared as Mount Egmont on maps until 29 May 1986, when the Minister of Lands ruled that Mount Taranaki would be an alternative and equal official name. The Māori name is now in common usage.

Local Māori believe that Taranaki once stood with the other mountains of the central North Island. But after a fight with another mountain over the beautiful Mount Pihanga, Taranaki fled west, carving out the bed of the Whanganui River on his journey to the coast.

If you are in the area and miss the stunning view of Taranaki looming over you, understand that it’s because, according to legend, when cloud covers the mountain, Taranaki is hiding his tears for his lost love.

Egmont National Park is a mountainous area that encompasses three volcanic cones. The main peak of Mount Taranaki (2518 metres) forms the nucleus of the park. One of the most symmetrical mountains in the world, it is a distinctive landmark visible from around the region.

The lush rainforest on the mountain’s lower slopes is due to the area’s high rainfall, and the moss and lichens dripping from the tōtara and kāmahi trees mean the bush is sometimes referred to as ‘goblin forest’. Higher up the mountain, the forest gives way to shrub and alpine herb fields. 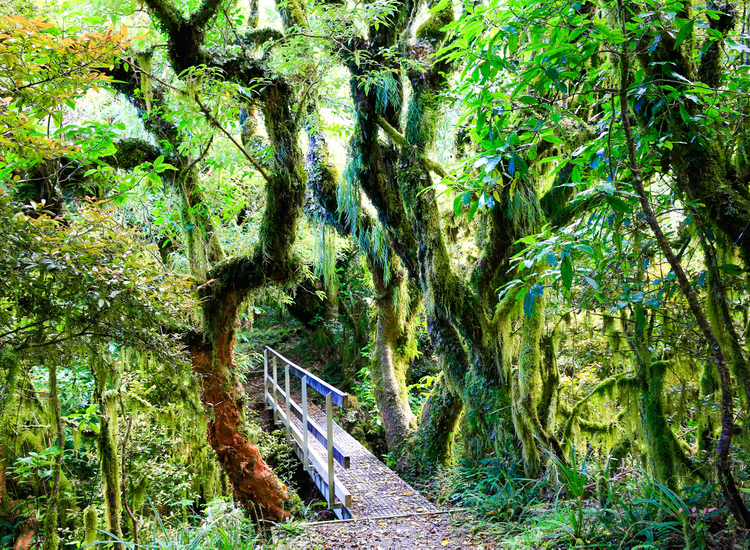 Native birds abound – you might catch a glimpse of miromiro, tūī, korimako and kererū.

The park is home to several unique invertebrate species, and almost half of New Zealand’s indigenous fish species are found in or near the park. Nationally threatened fish species include the giant kōkopu, short-jawed kōkopu, banded kōkopu and kōaro.

The land was first formally protected in 1881 when its slopes (within a 9.6-kilometre radius of the summit) were made a forest reserve. Development of huts, tracks and roads followed. Gradually more land was added to the reserve and in 1900 it was made a national park, the second in New Zealand after its not too distant neighbour, Tongariro. It has been a popular tourist destination ever since.

The Dawson Falls area has an 18-metre high waterfall, named for Thomas Dawson, the first European to discover it, in 1885. The Māori name has a little more intrigue involved – the falls are known as Te Rere o Noke (the Falls of Noke), named after a Māori warrior who hid behind the falls from his pursuers.

You go to Egmont National Park to walk and the walks available are sensational. You’ve got over 200 kilometres of walking and hiking to choose from! The area is divided into the East Egmont area, the North Egmont area and the Dawson Falls area, and in each of these you can choose between an easy stroll, a more active walk for up to four hours, hike the day away or go all-in for an overnight tramp.

Traversing the Pouākai Circuit walk (two-three days) is a fantastic way to see all the beauty the park has to offer.

Exploring the national park’s enchanting and aptly named Goblin Forest is a must-do, as is visiting the magical Wilkies Pools on the Dawson Falls side, a series of rock pools connected by gentle waterfalls and creating natural waterslides.

The Mount Taranaki Summit Track (five-six hours up, three-four hours down) is another great walk for experienced trampers with good equipment. The first ascent of Mt Taranaki is attributed to Tahurangi, who lit a fire on the summit to prove he had taken possession of the mountain for the Taranaki tribes.

New Zealand’s oldest building in a national park is found at North Egmont – the historic Camphouse was originally used as military barracks in New Plymouth during the Taranaki Wars of the 1860s. It was sledged to North Egmont in 1891 for use as accommodation and has been upgraded, but lots of its unique features like handwrought corrugated iron with rifle firing slits (loopholes) and tongue-and-groove timber panelling are still visible. On the North Egmont side, there’s also a café with fabulous views and an interesting information centre.

The Whanganui is New Zealand’s longest navigable river, winding its way from the mountains to the Tasman Sea. You can imagine it would have looked much the same a hundred years ago. Read the story . . .

Taranaki is about as close as you can get to the ideal of volcanic beauty – almost perfectly round, its nearly symmetrical cone rising to a pointed summit, with a single crater. Read the story . . .

Taranaki's gardens: a sight to make the heart sing

Taranaki's gardens are a sight to make the heart sing – especially since you don’t have to do the weeding. Read the story . . .