At least that’s what the old scowmen of the nineteenth century used to say when talking about the rural settlement of Waiuku.

The term 'White City' was said to be a reference to the atmospheric mists that rolled down from the hills. When they met the pavements of crushed shells, they turned everything white. 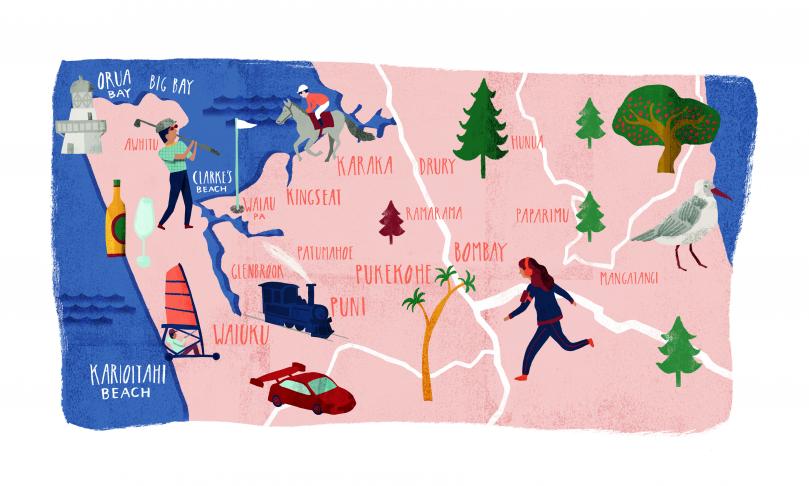 I imagine the old scowmen’s preferences for ‘things to do’ were rowdy in nature, which means they’d be sorely disappointed in the White City today because Waiuku, one of Franklin's numerous towns, is now a genteel wee hamlet.

Set among a wider region that boasts cafés, vineyards, farmers’ markets and beaches, a vintage steam railway, even a racing car track, there’s an awful lot to do in this bucolic corner of the country.

Historic by New Zealand standards, it is estimated the first Māori made their homes in Franklin around the thirteenth century. Many hundreds of years later, the area found popularity with colonial settlers drawn to the rich, arable land and relatively accessible trade routes. Although Māori and Pākehā were both pipped at the post by the dinosaurs who roamed these parts many millennia prior. In Port Waikato, if you know what to look for, sharp-eyed visitors have to been known to unearth ancient fossils.

With such an abundance of history, the Waiuku Museum is a pleasant way to put the past into perspective with visitors discovering how this collection of heritage buildings has earned a reputation for being  'The Coolest Little Museum This Side of the Waikato River'.

Stretching its earthly fingers into oceans on both sides of the land, the diverse Franklin district spreads across the North Island from coast to coast.

Beneath Auckland and above Hamilton, it wraps itself across the land like a scarf. From Port Waikato in the west to Miranda and Kaiaua in the east, it pushes up to Papakura in the north and all the way down to Meremere, including Gordonton in its broad grip. That’s 2,188 sq km of land, sometimes wildly rugged, other times tranquil and cosy, depending on where and when you explore.

For a belt of bracing fresh air, Āwhitu Peninsula will pump the city out of your system. The trees here bow to the wind, a tribute to the strong, gusting winds. And never take the sea on Franklin’s western shores for a fool because the Manukau Bar is a treacherous body of water. In 1860 when the HMS Orpheus ran aground, 189 of the 259 sailors on board perished, making it New Zealand’s worst maritime disaster ever. A silver lining of sorts, the tragedy led to the construction of the picturesque Manukau Heads lighthouse, a beacon for anyone visiting the area today.

Because developers have yet to fully recognise the potential of all this fabulous land, Franklin is proudly home to six golf courses, including the 18-hole course at Clarks Beach and the nine-hole sweetie at Āwhitu, right on the Manukau Harbour.

Golf’s not your thing? There's plenty of room left for a handful of agreeable vineyards. Awhitu Wines is open most weekends and public holidays, while John Hill Estate operates an elegant restaurant, with archery and clay bird shooting as added distractions. But be warned, there’ll be no handling of weapons after you’ve imbibed.

The same goes at Bracu, a fine-dining establishment just north of the Bombay Hills. Guests visiting Beretta’s elegant shooting experience, there among the olive groves, are also obliged to do their shooting (or knife throwing) before they pop any corks.

Another notable Franklin establishment is Castaways Resort. Perched above the surging surf of Karioitahi Beach, this high-end hideaway offers delicious dining and spa experiences with self-contained studios and glamping for making a night of it.

Still want more? Why not give car racing a whirl at Hampton Downs Motorsport Park? Or for the more languid of days, check out the glowworms of Nikau Caves and Café. One of the more laidback caving experiences you’ll find in New Zealand, the geologically impressive limestone landscape will leave you in no doubt as to why parts of The Lord of the Ring Trilogy was filmed here. There’s something mystical about this neck of the woods.

With green pastures appealing to farmers and horticulturalists, Franklin is also a safe haven for holidaymakers looking for beaches not too far from the big cities. Whether you’re after pony clubs or golf clubs, casual cafés or upmarket restaurants – or simply fish and chips at the beach – Franklin is a genuine treasure, unspoiled yet somehow, too, sophisticated.

Despite having two of New Zealand’s biggest cities for neighbours, it’s not at all difficult to find yourself a private spot of bush or beach here where you can enjoy the rare pleasure of feeling like the last soul left on earth.

Loved by the locals: East Auckland

Do what the locals do in East Auckland. Read the story . . .

The best way to introduce yourself to a new area is to take a stroll with a local. The tips and places you will visit will depend on that local’s personal experience Read the story . . .

Loved by the locals: Franklin

Often called the ‘Birthplace of our Nation,’ Waitangi Treaty Grounds is Aotearoa New Zealand’s most important historic site and an absolute must-visit when you’re in the Bay of Islands.  Read the story . . .