New Zealand on film: more than hobbits and snowy mountainscapes

It’s something of a blessing and a curse that nowadays, if you say ‘New Zealand film’, most people immediately think of The Lord of the Rings.

Fair enough, I suppose, to the extent that the trilogy (and, of course, the ensuing triptych, The Hobbit) certainly put Aotearoa on the map as both a magical travel destination (thanks to that wonderful widescreen photography of hobbits trekking across all our snowy mountainscapes) and a country where international productions are guaranteed fantastic locations, a very favourable tax break and the skills of world-class local crew.

It’s worth exploring our back catalogue to discover many of the seminal stories we used to tell – from those describing violent moments in our country’s history (Utu, Heavenly Creatures, Out of the Blue) to tales that afford us a glimpse into the lives of our people (Broken English, No. 2, Once Were Warriors) and those, of course, that have attempted to follow a more Hollywood formula and, er, sort of succeeded.

Watching Temuera Morrison exude a not-quite-Bond-like wit and way with women in Never Say Die was a formative part of my 1980s cinematic experience. And however dated it would seem today, that film gave director Geoff Murphy his leg up into American movie-making with Young Guns II, Under Siege 2 (and other films with ‘two’ in the title), so it must have worked on some level.

New Zealand produced its first feature film in 1913, so we’ve had a century to hone our skills.

If you’re curious to get under the skin of what really preoccupies the Kiwi filmmaker, why not peruse this sample of our country’s more recent cinematic wares.

Internationally-acclaimed Kiwi actor Sam Neill coined the phrase Cinema of Unease in his documentary of the same name, which came out in 1995 and won praise at the Festival de Cannes. (Praise from overseas is still a big deal to us Kiwis, small island dwellers that we are.) Neill posited that New Zealand’s most notable films shared a ‘dark and brooding’ tone, which he put down to our nation’s inability to fix upon its national identity.

Let’s be honest – despite a couple of forays into fairly broad comedy until recently New Zealand cinema hasn’t been known for being a bundle of laughs.

Perhaps it’s because we like to think we’re an intelligent, artistic and emotionally deep bunch. We have powerful stories to tell. Also, our landscape, however beautiful it is, often appears as an apt supporting character in stories of human struggle. Our dark rainforests; the stark, unpeopled beaches; vast silver lakes. Send a man on a road trip through rural New Zealand and you’ll really discover his mettle.

It’s true that as I was growing into a cinephile in the 1990s, my local arthouse theatre routinely played lo-fi, low-key stories of ordinary people encountering difficult situations which they would overcome in quite dark ways. This was the era of An Angel at my Table, the devastating biopic of famed New Zealand author Janet Frame. It was the decade of Once Were Warriors, which gave middle-class Pākehā New Zealand a horrifying insight into poverty and domestic violence in South Auckland. The not-yet-Sir Peter Jackson set newcomer Kate Winslet on her trajectory to superstardom by casting her as Juliet Hulme in the fantastic (and somewhat fantastical) Heavenly Creatures, the real-life story of two girls who committed murder in 1950s Christchurch. (Winslet’s counterpart in the film, Melanie Lynskey, has also gone on to cement a stunning career in TV and film in Hollywood.) 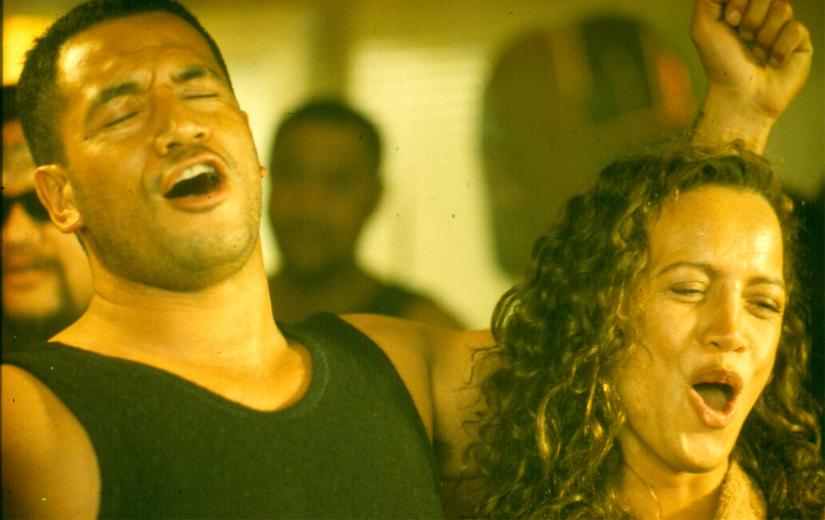 Temuera Morrison and Rena Owen in Once Were Warriors. © Communicado Features

I remember commandeering the university pub’s TV at 2pm that afternoon to watch the Oscars and saw our very own The Piano take home three gongs (including a tiny, wide-eyed Anna Paquin’s breathless acceptance of her Best Supporting Actress award). 1996’s Broken English broke ground by inviting us into the previously uninterrogated lives of Croatian immigrants living in Auckland.

While we’ve lightened up a little since then, many of our strongest recent releases revolve around mental illness (The Dark Horse), social inequality (Orphans & Kingdoms) and bloody, tribal revenge (The Dead Lands). When you look down a list of Kiwi releases, there isn’t a whole lot of laugh about.

You gotta be joking, mate

However, in recent years we seem to have become bolder about giving comedy a go. Furthermore, this move towards levity has also seen New Zealand present a wider cultural illustration of Kiwi life, notably portraying Samoan and other Pasifika communities with more of their own flavour.

2006 was a particularly big year for playing against type, with the portrayal of a Fijian family in No. 2, the slapstick hilarity performed by four Samoan boys at the centre of Sione’s Wedding and the black comedy-horror film Black Sheep. While the first of these received a mixed reception, Sione’s and Sheep were both adored by audiences. (On a personal note, I do wonder whether sometimes context is everything: I was living in London when these films came out, and while I found No. 2 incredibly moving in a homesickness way, I must be the only Kiwi alive who thought Sione’s Wedding was just plain silly. Black Sheep I couldn't watch because I’d been at school with one of the leads – an occupational hazard in such a small country.)

But what the 2000s showed is that while our unease about identity may not have abated, our courage to try new genres and create local stories which local audiences would want to see was growing. Amidst the three Lord of the Rings movies and a King Kong, New Zealand put out Whale Rider (and a Best Actress Oscar nomination for 12-year-old Keisha Castle-Hughes), brought Brits over to star in local stories In My Father’s Den and The World’s Fastest Indian and introduced us to the wunderkind director Taika Waititi (then Cohen) and rising star Jemaine Clement with their feature debut Eagle vs. Shark. The Māori boy from the East Coast went on to create incredibly funny box-office hits and recently directed the Thor: Ragnarok movie, while Clement is popping up as the Kiwi-accented eccentric in many an American show. Kudos to them. 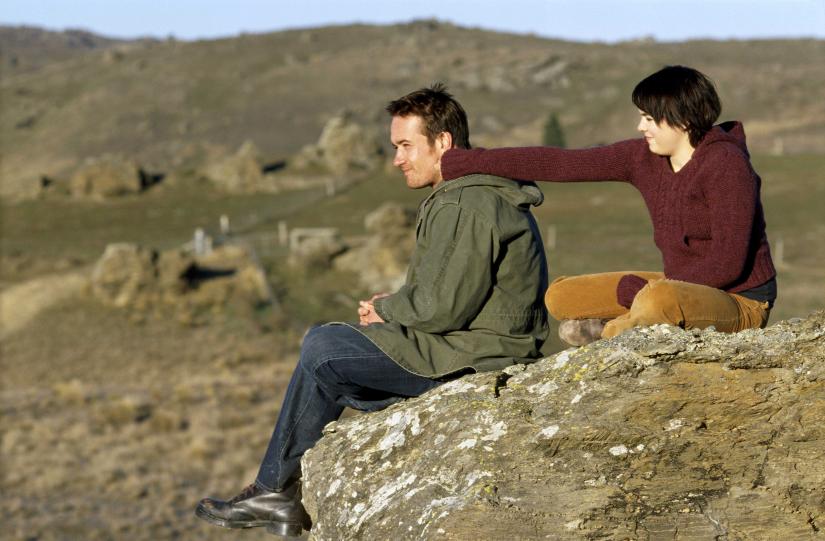 A scene from In My Father’s Den. © Trevor Haysom

It’s impossible to adequately shout-out the best of Kiwi film, as any list of must-sees is more exhaustive than I can be here. But one thing’s for sure: whatever the behind-the-scenes economic challenges our industry is currently facing, our filmmakers are tenacious and their offerings becoming ever more varied and successful.

In 2014, New Zealand had a bonzer year releasing 15 local films (by which I mean locally-created, not overseas productions using our fine facilities) and exhibiting a handful more during the annual film festival.

So, one final piece of advice, as you embark on your voyage of discovery of Kiwi cinema: make sure you’ve caught two of our recent, critically-acclaimed hits, Hunt for the Wilderpeople and the fascinating documentary Tickled. Then I’ll leave you to get on your way...

Sarah Watt is the Sunday Star-Times film critic and a keen traveller around New Zealand and abroad.

When not cosied away in cinematic darkness, she feels most at peace gazing into the sparkling turquoise of Lake Pukaki or standing ankle-deep in the Waitemata Harbour.

Ancient gravels and millions of years of erosion have created one of New Zealand’s most spectacular geological sites at the Putangirua Pinnacles.  Read the story . . .

The best way to introduce yourself to a new area is to take a stroll with a local. The tips and places you will visit will depend on that local’s personal experience Read the story . . .

Driving down into the guts of The Mighty Waikato from the Kaimāī ranges you get a good look at the land as it flexes its muscles. Read the story . . .

Sarah Watt is the Sunday Star-Times film critic and a keen traveller around New Zealand and abroad.

When not cosied away in cinematic darkness, she feels most at peace gazing into the sparkling turquoise of Lake Pukaki or standing ankle-deep in the Waitemata Harbour.