It is inevitable that as soon as a young child arrives on a ski field, zipped into multiple layers of snow clothes, they will need to use the toilet.

Still, the day of our first family trip to Whakapapa is pretty close to perfect. It’s what they call a Bluebird day: Cloudless, windless, and busy without being unpleasantly crowded.

On our first run, with young Gus tucked safely inside the V of my skis, we glide slowly over dry, powdery snow. He hangs like a dead weight by his elbows, limp-kneed but grinning and exclaiming at how much fun it is: “woohoo!” 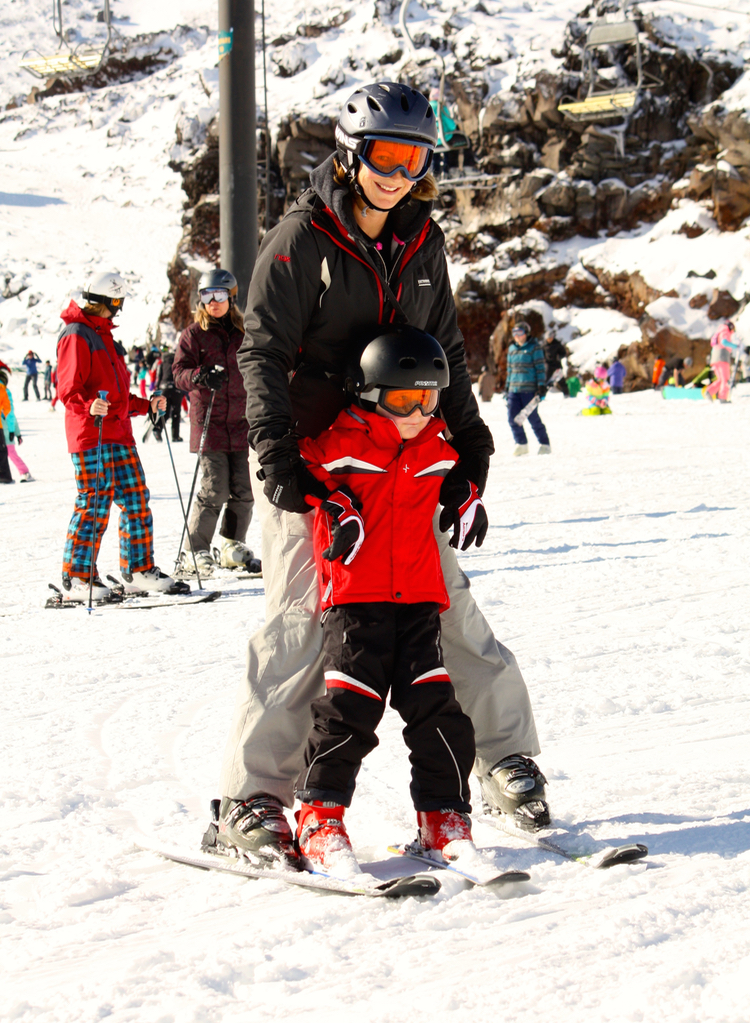 At the bottom, I manhandle him through the short queue for the chairlift. The ticketing system bleeps us through automated gates on reading our passes deep beneath layers of clothing.

At the lift, an attendant cheerfully lumps Gus into the seat next to me and we lower the safety bar, skis swinging under us, for the ride back up. “Mum, why is it so quiet?” he whispers. I try to explain about the muffling effect of the snow, but he’s right – I get the strange sensation that my ears have been stuffed with cotton wool. Even though I can see people not far below us laughing and squealing in the snow, they sound oddly distant in the sheltered valley.

We reach the top of the chairlift and I nervously push up the safety bar, clutching a tight handful of Gus’s jacket as we prepare to dismount. But, rather than collapsing into a heap, he surprises me by sliding smoothly off to the side like a pro. This, however, is the only bit of solo skiing he does all day – he’d much prefer to let me do all the work.

After a couple more runs my back is aching and sweat is trickling uncomfortably beneath my thermals, despite the icy temperature. It’s a relief when Gus declares that he’s had enough skiing for the day.

Along with Ben, my non-skiing husband, we catch the Rock Garden and then Waterfall chairlifts to the upper mountain for lunch. I can’t help smiling at Gus’s amazement at the expanse of the ski fields. He is mesmerised by the huge machines puffing out clouds of fresh snow; throngs of brightly coloured skiers and snowboarders whooshing along groomed trails; the backdrop of the soaring Pinnacle cliffs. “Ahh,” he breathes in awe, “you know, very deep views are the most beautiful.” 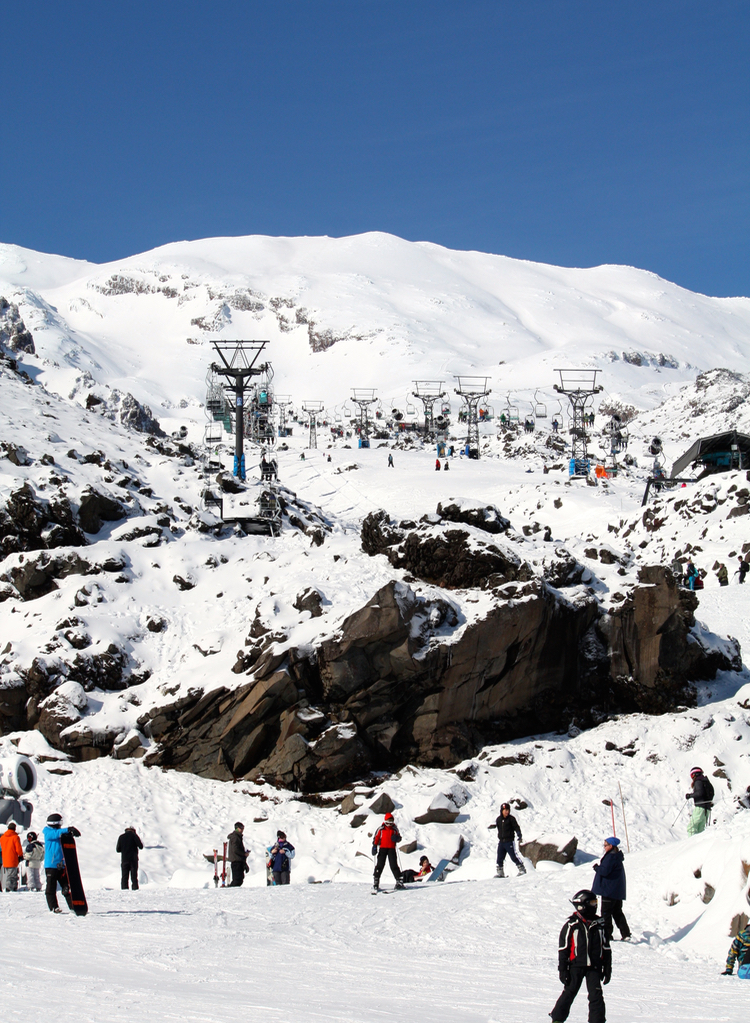 Lunch means hobbling awkwardly in rigid ski boots through the packed cafe. The wafting aroma of coffee and hot chips is irresistible.

In the afternoon I steal in some solo runs on the upper mountain. Hissssch whisper my skis as they skim the smoothed snow; krrrraw as the metal edges cut into a turn.

It makes a satisfying rhythm, repeating down the hill. Near the bottom of the Waterfall chairlift, I teeter briefly on the fulcrum between fear and exhilaration before hurtling down the end-of-run chute, skis parallel, poles tucked in my armpits and praying for no lumps or rogue rocks to hit at full speed.

Happy, but with aching legs and numb toes I return to the beginner slopes to find Ben and Gus putting the finishing touches on a kid-sized igloo. 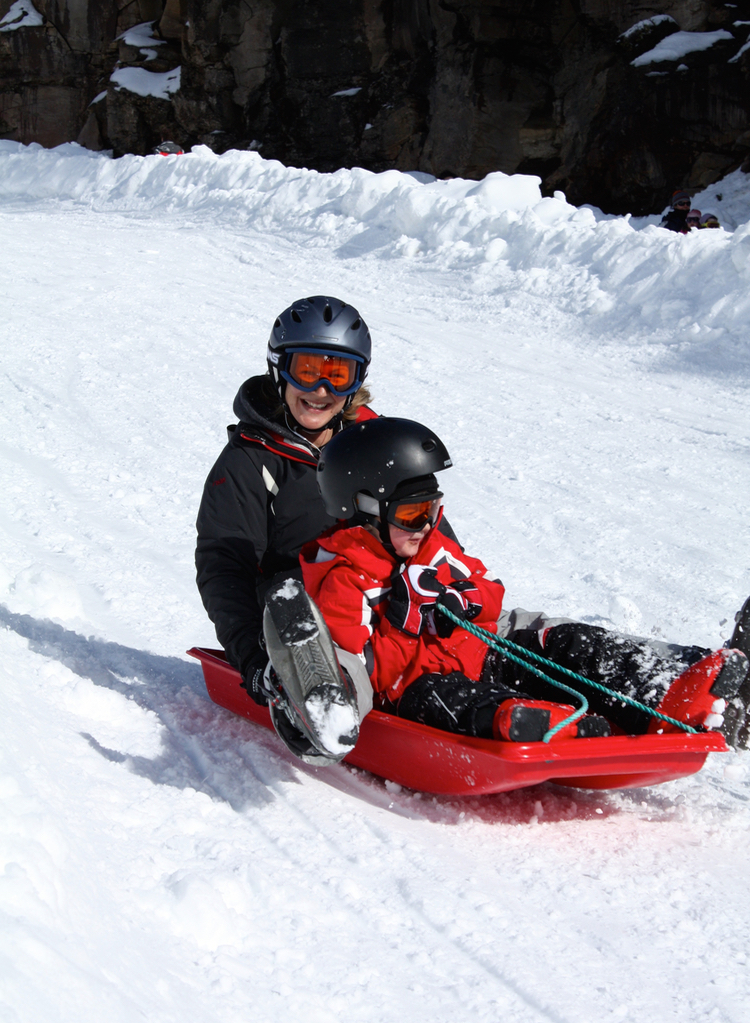 Despite having skied for years, I had never been on a toboggan before. So Gus – who has spent the afternoon mastering the art – has his turn to teach me. He sits in front, steering confidently, and we whizz down the track, with sprays of fresh snow flying into my face as I laugh.

Five fun things to do in Ruapehu

From exploring the Tongariro National Park to venturing up the majestic maunga, there are plenty of activities to enjoy in the Ruapehu region.  Read the story . . .

The broad area around Tongariro National Park must have been a majestic place when Māori enjoyed undisturbed possession.  Read the story . . .

Chateau Tongariro: style and grandeur at the foot of Ruapehu

Tip your hat to architect Herbert Hall of Tīmaru who harnessed the iconic, neo-Georgian style and grandeur of European mountain chateaus at the foot of Ruapehu. Read the story . . .