The Hauraki Gulf: islands of the north wind

The warm and sheltered waters of the Hauraki Gulf have been home to humans for up to a thousand years, providing a fertile fishing ground for early Māori and today forming the backdrop to New Zealand’s biggest city.

While Hauraki itself means the north wind, which used to bring raiding parties from that direction – the gulf now has another official Māori name: Tīkapa Moana o Hauraki, a sea protected by a sacred rock or mauri placed by the navigator Tametekapua of the Arawa canoe on an islet at the entrance to the gulf. 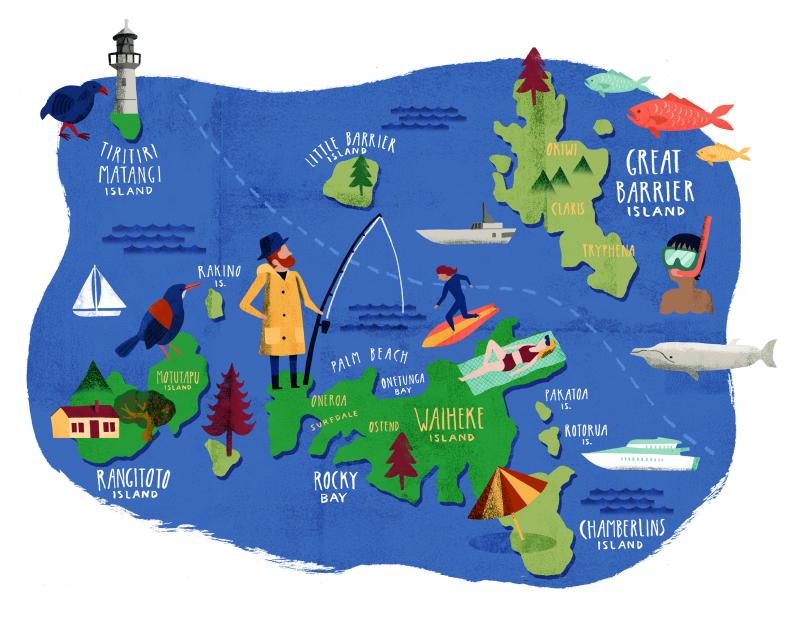 The gulf contains more than 50 islands, from rocky islets barely above the high-tide mark to suburban Waiheke and the massive Great Barrier, lurking on the horizon. Most are largely uninhabited; several are reserves and all fall within the Hauraki Gulf Marine Park, covering more than 1.2 million hectares of ocean.

On the weekends – and on any fine weekday – the inner gulf is abuzz with small boats: ferries, fishers, sailors, cruisers, explorers. Protected by the outstretching arm of the Coromandel Peninsula and its outlier Great Barrier, the Gulf's waters are host to schools of snapper, kahawai and fighting kingfish; a breeding ground for sharks; and home to bottlenose and common dolphins, their larger cousin the orca and the magnificent Bryde’s whale.

Many of the islands are home to rare and wonderful birds, too: sanctuaries such as Tiritiri Matangi, Motutapu, Motuihe and Rotoroa are playing an important role in bringing endangered species such as takahē, kiwi and tīeke (saddleback) back from the brink, while seabirds such as oystercatchers, gannets and terns enjoy the seafood buffet as much as the area’s human inhabitants.

Visible from around Auckland – sometimes looming large, then shrinking back to its regular size, as if caught out – Rangitoto is an icon of the city. The last, or should we say latest of the region’s volcanoes to erupt, a mere 600 years ago, the cone is quiet and cold now (unless you believe in the Wilberforces of Maurice Gee’s 1979 young adult thriller Under the Mountain).

While it might look green from a distance, up close the island is a tumbled mass of blackened scoria, relentlessly reflecting heat on sunny days and making spring and autumn the best times to attempt its summit. It’s not all rock, though: Rangitoto is bravely colonised by the largest pōhutukawa forest in the country, tinged red at Christmas time.

Rangitoto has been in public hands since 1854, but a handful of leasehold baches from the mid-twentieth century remain.

It must have been a magical place to go to sleep: looking back across the black waters of the channel to the lights of the city, listening to the lapping of the water on rock, the dark bulk of the volcano rising behind.

Motutapu was an island apart until Rangitoto decided to pop up out of the sea. Much older and very different geographically, 1500 hectare Motutapu (meaning sacred island) was inhabited by Māori at the time of its neighbour erupted; human footprints have been found in ash layers there.

Motutapu’s bush was cleared and its rolling hills farmed for more than a hundred years. However, now the forest and its birdlife are resurgent. Both Rangitoto and Motutapu are now officially pest-free, and a trust is coordinating revegetation and the reintroduction of rare species such as takahe.

After a hundred years as a Salvation Army alcohol- and drug-rehabilitation centre, Rotoroa now offers a different kind of sanctuary. Also managed by a trust, the island has been opened to the public as an arts, heritage and conservation park through the philanthropy of Neal and Annette Plowman. Takahē, tīeke (saddlebacks) and kiwi are thriving on the island, which also retains remnants of its addiction-therapy days when it was nicknamed ‘Alca-traz’. A stunning – and, yes, sobering – visitor and exhibition centre tells the island’s story. You can day-trip or stay the night in a restored holiday home or hostel, and wake to the sound of a rejuvenated dawn chorus.

Light in the darkness: Tiritiri Matangi

One of New Zealand’s conservation success stories, Tiri, as it’s usually known, is another open sanctuary. Its Māori name means ‘buffeted by the winds’, and early Polynesian settlers imagined it to be afloat on a huge fishing net.

Tiri’s lighthouse, built in 1864, once housed the brightest light in the southern hemisphere, its beam visibly sweeping across bedroom walls of houses on the North Shore every 15 seconds from dusk till dawn.

It is still a vital navigational aid, but today the lighthouse-keepers and farmers have gone, replaced by regenerating native bush which is home to species such as takahē, kōkako, tīeke saddleback and hihi stitchbird.

Some visitors were treated to a pair of Kōkako yesterday. Here we have a male performing a courtship display for his partner. Thank you so much @naturally.birds for the amazing capture!

A post shared by Tiritiri Matangi Island (@tiritirimatangiisland) on Dec 3, 2016 at 3:44pm PST

On the edge of Auckland’s consciousness, its highest peaks just breaking the horizon, Great Barrier is a world apart. The fourth largest island in New Zealand (outside the North and South Islands) at 285 square kilometres, it has a permanent population of less than 1000, a subtropical climate and hectares of wild country – just a half-hour plane trip from the city. The east coast offers white-sand beaches and some wicked surf breaks, the west the harbours of Tryphena, Whangaparapara and Port Fitzroy. In between, the island’s bush-clad and mountainous spine offers more than 100km of walking tracks.

Settled by Māori for hundreds of years, the island’s European history is shorter and more brutish: extractive industries ruled in the 1800s and early 1900s, with copper, gold and silver, kauri timber and passing whales all coming into the sights of speculators. Boom turned to bust, however, and today the island’s value lies in its splendid isolation. There might be limited cell phone and internet coverage, but there’s decent coffee, spectacular scenery and a pace of life which many city-dwellers would envy.

I've just gotten back from an awesome long weekend on Great Barrier Island! Having not been since I was much younger it was awesome exploring this diverse and beautiful landscape! 😍🙌 I'll definitely be back again for a round 2 very soon! Thanks heaps to @oramaoasis for hosting us and the awesome company from @rachstewartnz @jackburdenimages @markgeenz @naomiarnoldnz @rodger_jack_nz!

Auckland is still known as the City of Sails, largely because it has some of the world’s best cruising waters on its doorstep. Read the story . . .

It’s as if a chunk of Coromandel Peninsula floated off to the north. There’s the surf beach side and the quieter bay side, like Coromandel, with the steep choppy spine in between. Read the story . . .

Island hopping, Irish pubs, special sanctuaries and more – find out what the locals love about the beautiful islands of Auckland's Hauraki Gulf. Read the story . . .

Waiheke Island: a sense of freedom

Some people were terribly excited when Lonely Planet named Waiheke Island as the ﬁfth-best holiday destination in the world.  Read the story . . .