The treaty grounds at Waitangi was the birthplace of New Zealand as a nation. © Bernd Hildebrandt

The Treaty of Waitangi is a strange sort of document.

It was cobbled together in haste by William Hobson, the young naval officer dispatched from New South Wales to take matters in hand, tinkered with by the resident British magistrate, James Busby, and then loosely translated by missionary Henry Williams and his son, Edward. It was presented to a large gathering of Māori chiefs on the lawn of Busby’s house, the Residency, on Wednesday, 5 February 1840, and after a brisk debate, signed by most of those present the following day. 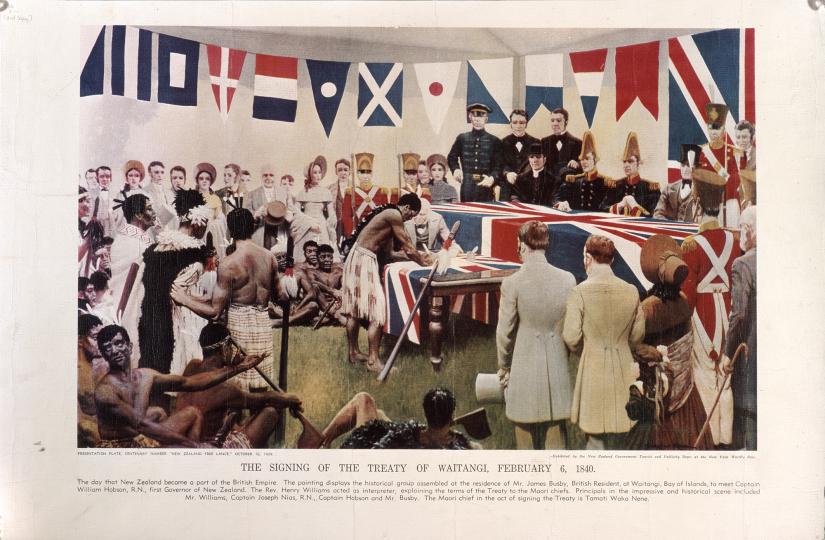 In presenting the Treaty, the British expected to take complete control of Aotearoa and all who lived there, assuming, in particular, the right to regulate the sale and purchase of land. In signing, most Māori believed they were receiving protection from the British Crown from the depredations of ‘the French or the rum sellers’.

It was the beginning of New Zealand as a nation: what a pity it had to be based on a misunderstanding. Nonetheless, the two peoples were now united, for better or worse, in something resembling holy matrimony and, like most marriages, there would be rough patches and smooth.

Interest in the Treaty among European-descended settlers began to revive after a long period of oblivion when James Busby’s decaying Residency was gifted to the people of New Zealand by the then Governor-General, Lord Bledisloe, in 1932. The Treaty House, as it became known, was restored as a ‘national memorial’ – a memento of the signing of the Treaty – and so it has remained. A carved wharenui was subsequently erected alongside to symbolise the partnership between the peoples.

Thank you to everyone who attended our Waitangi Day Festival. It was a great day filled with family-fun & culture 🌞

A post shared by Waitangi Treaty Grounds (@waitangitreatygrounds) on Feb 5, 2019 at 11:14pm PST

Every year, representatives of both parties to the Treaty gather at nearby Te Tii marae to reaffirm their commitment to the union. The occasion is seldom free from friction, but at least everyone is still talking.

Waitangi Day, 6 February, is the best time to visit, but the Treaty House is open year round, and guided tours are available. A cultural group, He Tohu, performs a fiery haka several times a day, and the visitor centre runs audio-visual displays illuminating the events of 1840 and the course of the Māori-Pākehā relationship ever since. There’s an artefacts room, where Treaty-related taonga are displayed. There’s a waka taua – a ceremonial war canoe – on display in the grounds, and on the manicured lawns out front, there’s a flagstaff erected where the Treaty was first signed, all those years ago.

Under that flagstaff is the perfect place to contemplate the Bay of Islands, and to reflect on how far we’ve all come, side by side.

What's the weather doing in the Bay of Islands?

Bay of Islands: bay of many places

If you’re looking for a sense of history in New Zealand, it lies in the Bay of Islands, a place where heritage and natural beauty combine perfectly. Read the story . . .

Loved by the locals: Bay of Islands

From impressive views and fascinating cultural history to chocolate treats and hidden beaches, we pick the best spots to visit in the Bay of Islands. Read the story . . .

Free things to do

Waitangi Treaty Grounds and the Museum of Waitangi

Waitangi has a perfect mix of experiences – you can drown yourself in the historical aspects, and you can wow yourself with the amazing view. Read the story . . .

What's the weather doing in the Bay of Islands?