The majestic Whanganui river has an ignominious end where it joins the sea.

Rocky breakwaters, North and South Mole defy the river’s natural curves and stick straight into the ocean. There is an endless battle of currents; the river wanting out and the ocean wanting in. Within this swirling mix, the occasional breaker makes its way inland between the two moles.

The port area, upstream, has a ramshackle beauty, with the wreck of a steamship used to separate the ever-moving river from still water. Semi-derelict warehouses, a neglected railway line and rusty equipment speak of better days when this was thriving port. Butter, wool and frozen meat left by the tonne on steamships and goods arrived to be transhipped and taken far up the river, then the gateway to the central North Island.

Six kilometres inland, the river becomes the beloved heart of Whanganui city. Walkways, parks and cafes open onto it. Backyards terrace down, willows weep and ducks paddle as the river ambles through the city, then farmland to St Mary’s church at Punahou.

Near Punahou, the river meets the solid buttress of Aramoana Hill. The road loses it for a few kilometres but, from Aramoana summit, we see the river way below as it turns around the hill and heads north-east. I look down the valley it has carved; steep farmland, lush green river flats, dark rainforest and Mt Ruapehu in the distance.

The road meanders up the valley, passing farms with colonial houses and classic corrugated iron outbuildings. At Atene there is an intriguing geographical feature: There the river flowed around a mini-mountain in a near circle, but it sliced through it, a few thousand years ago, and made a shortcut, leaving behind a near perfect circular valley.

The river road enters Māori land and Koriniti Marae, on green river flats, has two ancient wharenui (meeting houses), a small museum and a cute 1920 church. There is a 'visitors welcome' sign on the gate.

The wharenui are decorated with both carving and paintings. The marae and the buildings within it are spacious and pin neat. These words belong here: Ko au te Awa, ko te Awa ko au. I am the river, the river is me.

Jerusalem, 18 scenic kilometres further on, was made famous by James K Baxter – poet, marijuana-inspired visionary, and guru to some – who began a commune here in the 1970s and whose bones lie in the cemetery. 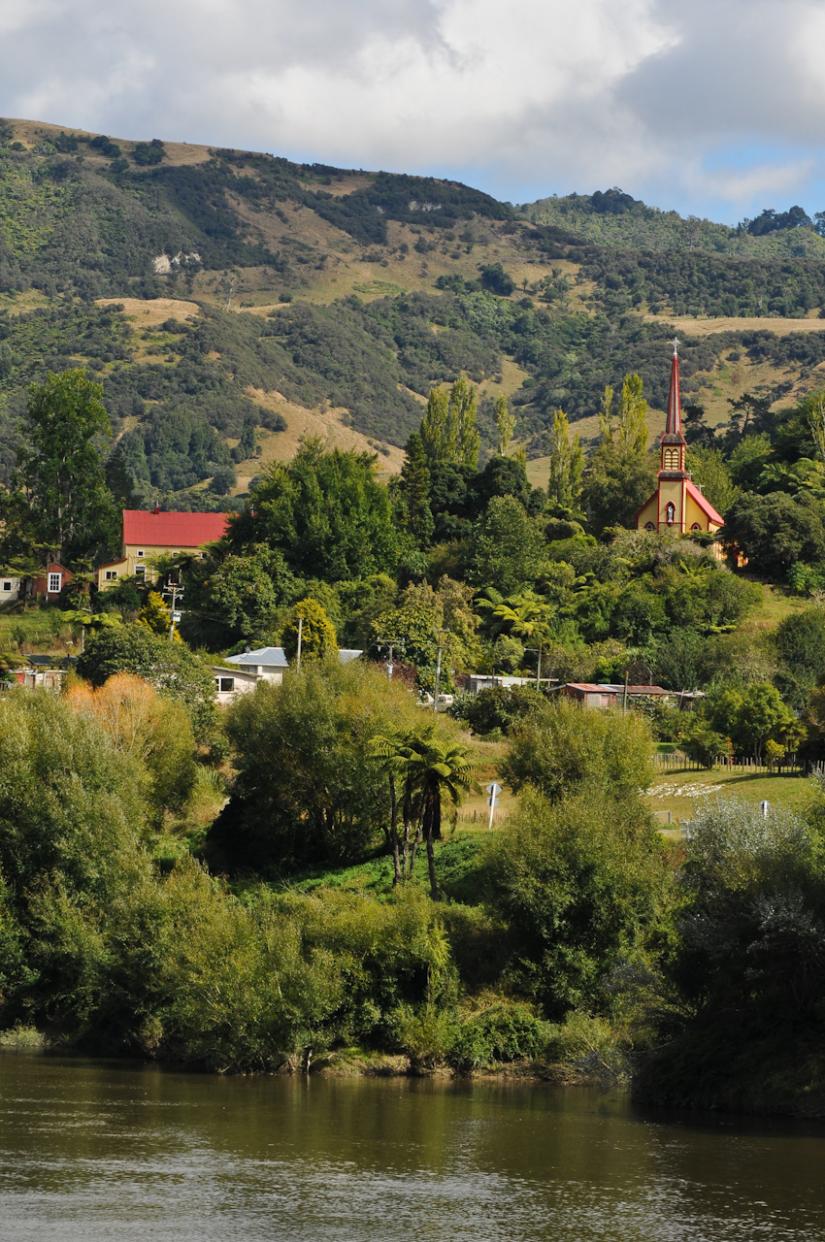 But Jerusalem was first put on the map by Suzanne Aubert, from the Sisters of Compassion, who started a mission there, in 1883. The convent is still there and sisters teach at the local school.

Willows line the river, houses straggle along the road and St Joseph’s church, on the hill, is surrounded by ponga, poplar and peach trees. Jerusalem has a unique bi-cultural beauty with Christianity essential to the mix.

There are 12 kilometres to Pipiriki through wild farmland and forest. At Pipiriki the road turns inland so we say goodbye to the river. It still has 210 kilometres to go to get to its birthplace on the snowy flanks of Mt Ruapehu.

What's the weather doing in Whanganui?

Take a botanical trip around the world at Paloma Gardens in Whanganui.  Read the story . . .

Four fun things to do in Whanganui

Tunnels and towers have a special fascination, and Whanganui has both. Read the story . . .

Bridge to Nowhere: stunning walking in the Whanganui National Park

Reach the enigmatic Bridge to Nowhere via the Kaiwhakauka Track or navigating the Whanganui River to the Mangapūrua Landing. Read the story . . .

Whanganui Journey: paddle your own canoe

While considered one of New Zealand's Great Walks, the Whanganui Journey is less of a walk and more of a paddle. Read the story . . .

What's the weather doing in Whanganui?