It’s hard to get a straight answer out of an Australian. Depending on who’s talking, the rain arrived yesterday, got comfortable last week, or settled in for the long haul a month ago. The only certainty is it’s here now and not going anywhere.

We, however, are. We have five days to see the sights of Queensland’s Great Tropical Drive, so a little drizzle is not going to slow us down.

Clocking in at just under 350km, it’d be easy to hoon straight from Cairns to Townsville, the drive’s finishing point in less than five hours. But doing so would mean memories only of dense, floppy-haired sugarcane fields and the odd banana plantation.

Like a degustation, you can’t scoff the drive; you have to take your time.

Our first stop is at Paronella Park. The attraction has been voted the ‘Number 1 Must Do’ activity in Queensland, but before arriving, I couldn’t work out what it was you actually did there. Turns out you go for a walk around a man’s dream.

Jose Paronella spent his life fulfilling a childhood ambition of building a castle. Starting in 1930, he drew up plans, despite having no architectural experience, cast thousands of bricks, landscaped its five hectares and built everything by hand. An astonishing achievement, an inspiring tale and undoubtedly the greatest folly I’ve ever seen. Above all else, it’s a nice place to walk around as the splendour of its bygone era comes to life within its mossy ruins.

With a free campervan berth included with admission, the rest of the day’s venturing extends no further than the pub across the road where we tuck into a fantastic steak dinner.

Early next morning I’m standing in a rainforest in the Tully Valley listening intently as our guide Doug runs through an extensive list of things that if disturbed, touched, eaten or looked at funny will – if I’m lucky – kill me.

As I learn how to recognise and avoid the plant that causes your skin to burn with the ferocious intensity of a flaming sun for three painful months, I begin to appreciate how carefree tramping through New Zealand’s native bush is.

Over five hours we walk the Rainforest Spirit Tour along an ancient unmarked indigenous path, Doug’s machete slashing overgrowth that’s stretched onto the trail and tapping fallen logs to scare off any slumbering snakes. Our other guide Caroline shares the forest’s stories as well as her family’s generations-long personal history with it. It’s fascinating and a true privilege and makes for a great day in the bush.

Rain dancing on the campervan roof wakes us the next morning and we decide to venture out of the seaside township of Mission Beach and go exploring. Nearby we discover the characterful Bingil Bay Café and over in South Mission Beach we excitedly spot two joeys chilling on someone’s lawn. Our travels lead us to the end of a nondescript cul-de-sac where a jetty leads down to an ominously murky river. ‘Achtung!’ exclaims a large yellow sign by way of warning that there are crocs in the swampy waters. Naturally, we decide to stalk one out.

I pull the campervan up as close to the water’s edge as I dare and we sit and wait and stare at the water. Eventually, the hushed hypnotic flow of the river begins rippling irregularly, right where the jetty gets swallowed up by the water. Sure enough, slowly gliding past at the river’s edge is a croc stalking us right back.

Later, we push the tropical theme to breaking point on this grey day by drinking cocktails poolside before taking an early evening stroll along Mission Beach.

Even in rubbish weather, its deep golden sand and shoreline palm trees impress. On a sun-drenched day, it’d be glorious.

The following morning we come to appreciate the vastness of Oz as we attempt to sightsee. Minor detours turn into major missions due to the distances involved.

In Ingham, we stop at the famous Lees Hotel, celebrated in song as the Pub with No Beer, a problem I can confirm they’ve now sorted, before continuing on to Girringun National Park to see a waterfall.

It’s a sketchy drive up to Wallaman Falls in a campervan, full of steep narrow corners and an unpaved section peppered with potholes. Under brollies and plastic ponchos, we gaze across the gully at the thundering falls. Plunging 268m straight down, Wallaman is Australia’s highest single drop waterfall and I get slightly vertiginous just looking at it.

It’s a welcome surprise to find our final day is hot, bright and cheerful; a tantalising glimpse of Queensland at its best. Better late than never I think, leaping into the natural pools at Little Crystal Creek in the Paluma Range National Park. The water, which comes trickling down from the mountain, is clear and refreshing.

After a nosy around Townsville’s Reef HQ, a massive aquarium filled with coral reef from Great Barrier and home to dazzling exotic fish, including a very cool hammerhead shark, our journey ends at a beachfront restaurant.

Here, at the sunny end of the road, the trip gains new perspective. It may not have been the tropical trip we’d hoped for, but we found plenty of fun along the way. 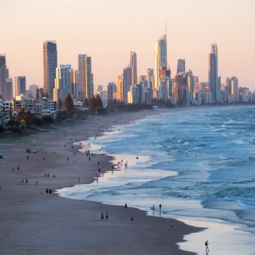 ‘These parts’ is Outback Queensland. Way out back: two and a half hours’ flight or two days’ drive from Brisbane. When we visit, there’s been no rain to speak of for several years. Read the story . . .

The famous Seacliff Bridge unfurls in front of us. Smooth concrete pillars rise from the sea to support the road curving around the cliffs, with crashing surf below. The Porsche purrs appreciatively. Read the story . . .

Five picks for a weekend in Byron Bay

We’ve picked five ways to squeeze the most out of a long weekend in Byron Bay, the rustic seaside township at the northern tip of New South Wales.  Read the story . . .

The Sunshine Coast is bathed in golden rays for more than 300 days each year, so the chance of your holiday being, well, sunny, is high. Eat. Sleep. Beach. Repeat. And then try some of these extra special experiences. Read the story . . .