The latest generation Peugeot e-208 fits perfectly into the brand’s "Move to Electric" strategy, distinguished by its chic design. After our time with the Peugeot e-208, it reaffirmed the reasons why it was the winner of the 2021 AA Driven NZ Car of the Year: Best Clean & Green BEV class.

Stepping into the compact Peugeot e-208 reminded us of the fun we had driving Peugeot’s latest generation 208 GT which we had the pleasure of reviewing late last year. Despite being the eco-friendly choice, this little beauty still managed to capture the same spirit we relished in the petrol powered feisty 208 GT. It’s a sprightly all electric GT hatch, which is also a very competitive offering from the French. 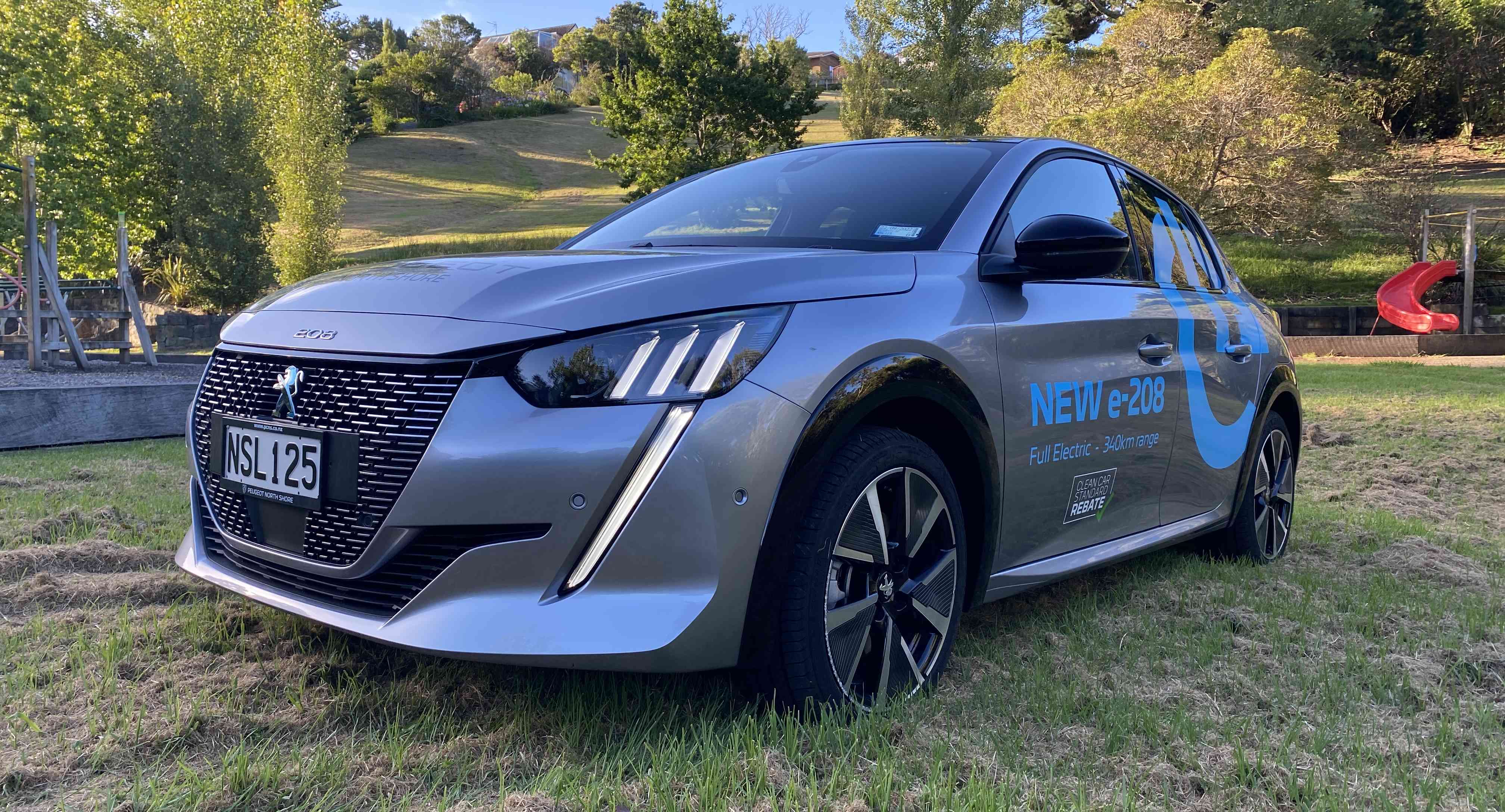 The Peugeot e-208 exterior limits the amount of chrome compared with similar BEVs, and it works with great effect. The style is delivered with expressive lines and pleasing proportions, which gives this compact hatch a polished look.

The dimensions are desirable for city slickers at just 4055mm long and 1745mm wide. This is a brilliant size, not overly large like some BEVs tend to be we found navigating mall carparks a breeze - even during Boxing Day madness.

The bold front is instantly recognisable as a Peugeot, with its signature 3-claw and Saber design LED daytime running lights. The front bumper is designed as a single contour, housing a perfectly integrated chequered radiator grill, which surrounds a proudly mounted iconic Peugeot dichroic Lion.

The rear is finished just as well as the front, with a neat black band running over the full width of the boot lid – proudly displaying the brand name. Also, it’s one of the few places on the exterior you will find chrome, with the band giving a cohesive link for the 3-claw daytime running lights, which echoes Peugeot’s design cues found in the front. There is also a small “e” dichroic monogram nestled in the rear pillar denoting its electric capabilities. 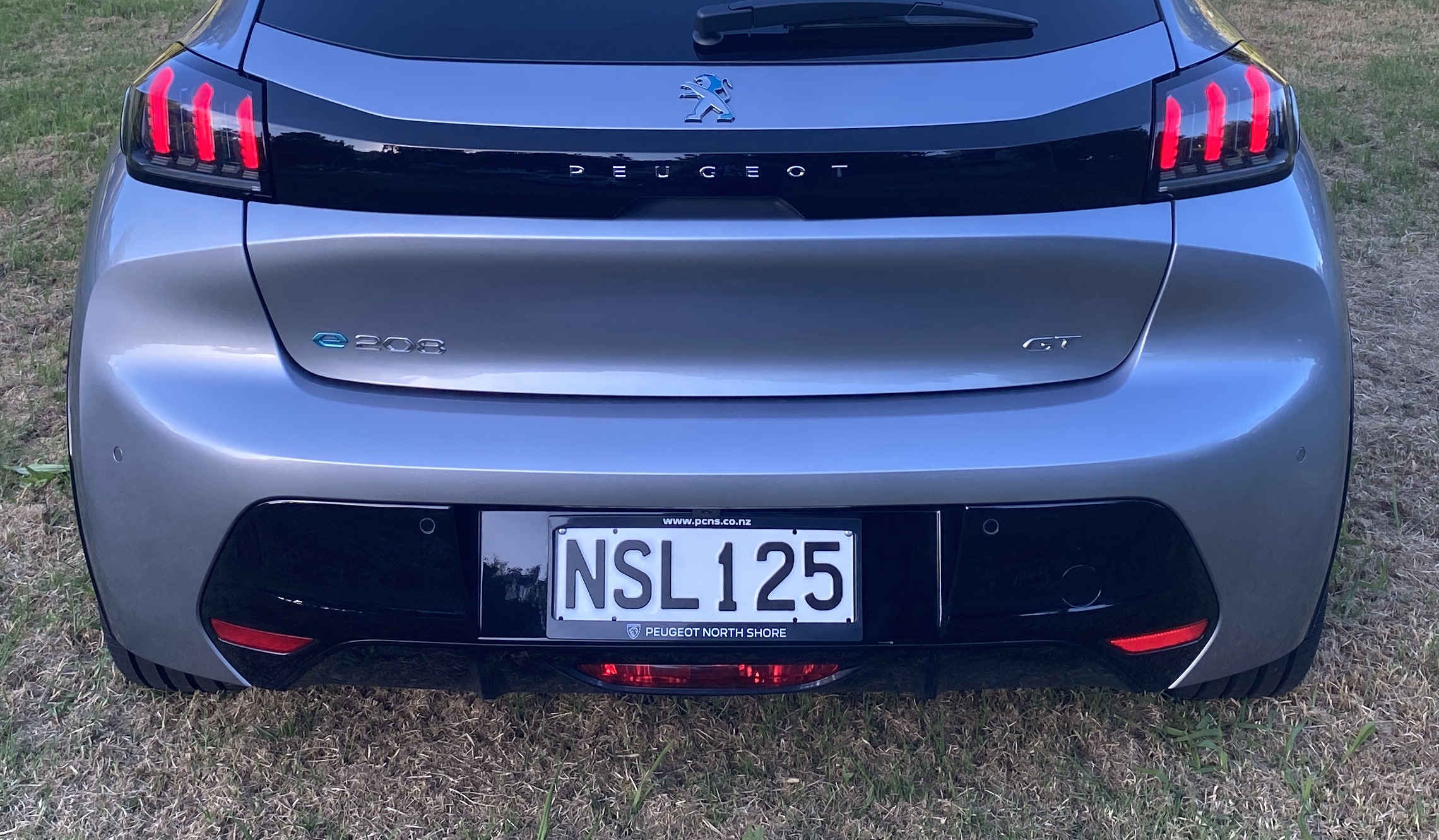 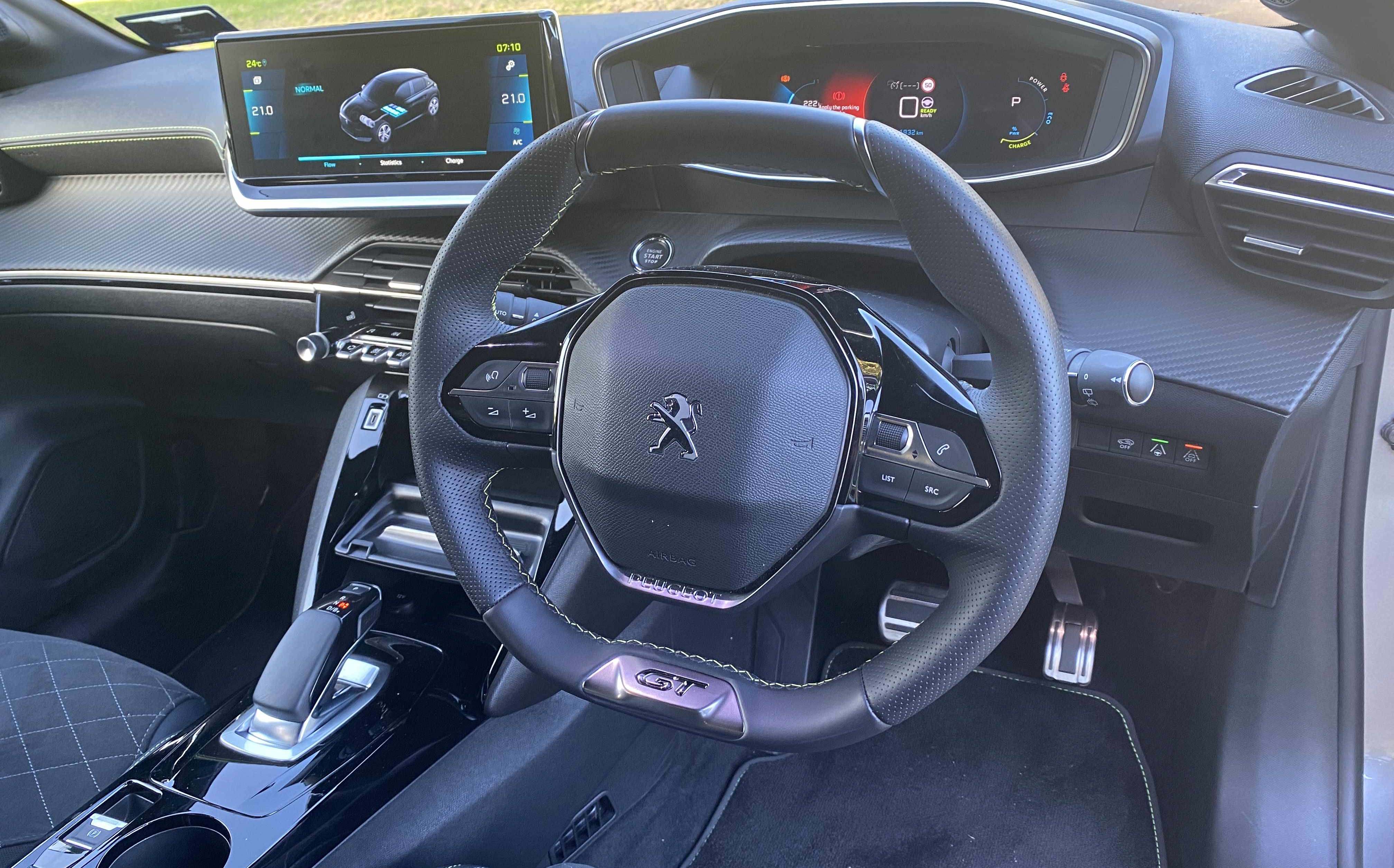 The Peugeot i-Cockpit features the same seamless three-tier ergonomic structure as on the other models in the range. We are now quite well versed in this set up and it marries up perfectly to the futuristic BEV format.

The Peugeot i-Cockpit 3D instrument panel displays information that can be read at two levels. On the upper digital pad, information is projected in hologram form. The data is dynamic, being displayed closer or further to the driver’s eye as a function of importance or urgency, thus increasing reactivity by around half a second.

There are so many unique interior design and functionality touches we loved. The interior lights for example were touch operated, and the dashboard is padded with soft touch premium feeling materials. The central section of the dashboard is embellished with a “carbon” finish which completes this modern ensemble well.

A clever concealable storage space in the central console can be used to store your smartphone and the cover doubles as a smartphone stand when the cover is in the open position; this allows for easy stowage without devices left sliding about the cabin.

The cabin has a large storage area situated neatly under the armrest - between the front seats. The glove box was slightly more compact than expected; it seemed like it has been cut in half due to what appeared to be accommodation for a large fuse box. The boot capacity however was better than we anticipated, especially considering the vehicle size at 311 litres.

The performance of the Peugeot e-208 is impressive; it is sprightly off the line with the instant 260Nm of torque at hand. The sport mode will give an enhanced driving performance and allows maximum power and torque. It will enable you to thrust from 0 to 100km/h in 8.1 seconds.

There are two braking modes which you can access with the gear selector. The first is a moderate setting that feels a bit like conventional engine braking, and the second is more aggressive and gives more of a one pedal like driving experience. However, it’s not the most dramatic implementation we’ve experienced.

The rear suspension is quite firm, and it incorporates a panhard rod to keep the rear axle in check, this is because of the added weight from the battery. We found the e-208 to be a comfortable yet sporty ride and while compact, we found that the rear is sufficiently comfortable and spacious for children and cargo.

Charging was interesting; we discovered that if you are only traveling between 60-70 kilometres per day, then overnight charging from a conventional wall socket is actually feasible. This took us about eight hours to replenish what we had consumed. Although we would imagine most people will opt for a 7.4Kwh wall box charger this will charge the battery from empty to full in seven hours.

A fast charger will let you charge from 0-80 percent in only half an hour, so if you are doing longer journeys a quick boost isn’t too difficult. The range is not bad at 348.5km, which means yes it can do the city circuit, but should you wish to travel further afield, that’s no problem either.

The Peugeot e-208 ticks a lot of boxes if you are looking for a compact electric hatch. It is also the same price as the entry level Nissan Leaf but boasts a larger range.

Another drawcard is that its currently $2,000 cheaper than the entry Renault ZOE. After experiencing both models we think that the Peugeot boasts an upper hand in the styling department especially for customers who are switching to electric and are looking for a stylish model that feels more luxurious and futuristic than its price tag would suggest.

The all-new Peugeot e-2008 GT electric is a futuristic-looking small SUV that has gone a long way...

Peugeot’s latest generation 208 GT is a breath of fresh air. The original 208 started its life...

The all-new Peugeot 2008 is a futuristic-looking compact SUV that has come a considerably long way since...