Sacred Heart Cathedral School in Wellington is a busy urban environment near Parliament. We’re greeted here by eight beaming faces of students aged between 10 and 13. They’re volunteer crossing patrollers and today is special; they’re showing us how they go about their patrol duties.

Across the country there are 1,400 crossings near schools that children control before and after school. Around 21,000 children volunteer as patrollers each year.

Although they have the help of a teacher or parent supervisor, after their initial training from Police, they are in charge. 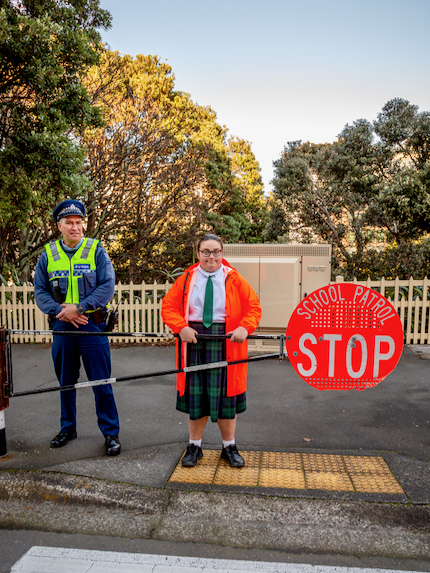 When we ask the Sacred Heart patrollers about their role it becomes apparent how important the job is. It requires getting to school early and handling an array of challenges. Like teachers, they experience the demands of being in control of groups of children. Within the group the camaraderie is palpable and there is no doubt that patrollers learn valuable life skills – organisation and patience being key. For the patrollers the rewards are being a school leader, mentions in their school report, the prospect of a badge, a Milo after patrol duty in cold weather, and getting to leave class early on patrol days.

They also adore Constable Aaron Dann, who is swamped by the younger children as he comes through the school gates. He’s one of two School

Community Police Officers who train patrollers in Wellington. After 14 years in the role he still loves it. “When I’m around town I often get older kids saying hi. They’re previous patrollers or just know me from school visits. It’s the best part of my job,” he says.

The first school crossing patrol in New Zealand started back in 1928 at Wakari School on the outskirts of Dunedin. A number of accidents involving child pedestrians spurred Mr J.L. Passmore from the Otago Motor Club (later AA Otago) to investigate a school patrol system that he had heard about in the USA. From Wakari School the idea rapidly spread to other Dunedin schools, through the South Island, and then into North Island schools.

At first only boys were invited to take part. To encourage them, badges were made and trophies were awarded in the form of pocket knives!

During recent decades, schools have run the patrols in partnership with Police, Waka Kotahi New Zealand Transport Agency and local authorities, and the uniforms have been funded by several different companies.

A discussion about the need to replenish uniforms sparked the idea that the AA should get involved again, says AA President Gary Stocker.

“Wearing a high vis uniform is essential for patrollers and supporting school patrols is a natural road safety fit for the AA, so we’re very pleased to help in this way.

“Young patrollers need to be easily seen and identified, and wearing the uniform gives them the confidence to manage crossings and indicates their legal authority to do so.”